This One's For the Girls.

Finally, here's one of the bibs I did with little girls in mind. Not to say that it wouldn't look cute on a boy as well. I had this one all set to go, but after knitting it up and looking at it for awhile, I decided that it needed some changes. Originally, I had a bow around the duck's neck, but it was pretty difficult to determine exactly what it was. Sometimes, a design will look so cute charted up, but then once it's knitted, it looks like crap! I decided to stick with simple and I'm happy with the results. I don't have the directions done yet for a dishcloth, but I'll work on it. Now, as for those who knit for boys, don't despair because I have a different version done that would look super for a guy. At least I think it will.... I haven't knitted it up yet!

The pdf is listed with the other bib patterns and here's the line by line for all of you who have a problem with the pdfs. (I still don't understand why, but it's just easier to post than to try and figure it out!)

Here then, is "Puddles": 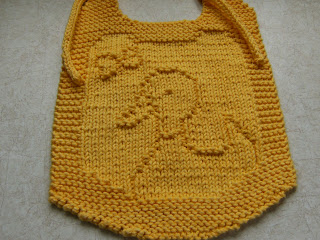 Copyright 2009 by Elaine Fitzpatrick. Permission is granted to make and sell items from this pattern provided that credit is given to me as the designer. Permission is not granted to reproduce the actual pattern, or post it, or distribute it, without my express permission. I worked hard to produce this pattern for you, so please respect my copyright and play nice!

Size: approximately 8 ½" from neck edge to bottom and 8" wide

Materials: One skein of worsted weight cotton if you are using the bib for meals. If, on the other hand, you want to use it as a “drool” bib, I recommend using a superwash wool. The cotton has a tendancy to absorb the moisture, whereas the superwash wool will wick the moisture and keep baby nice and dry! The bib pictured was done in Peaches & Crème in yellow.

When you reach the I-cords on the bib, it is helpful, but not necessary, to drop down a needle size to make the cords slightly tighter.

Row 69: k13, bind off the next 12 stitches knitwise, and knit remaining stitches.

You should have 13 sts. on each side. Place first 13 stitches on a holder and work on remaining 13 sts. as follows:

Note: As you look at the bib, this will be the left side.
Knit one row.

All the decreases are made on right side rows. I have included a couple of tips below.

(Right side) Dec. 1 st. at neck edge every other row 2 times. (11 sts.)
(Tip: I find it easiest to decrease these neck stitches by slipping the first stitch knitwise, then knitting the next stitch, and passing the slipped stitch over the knitted stitch. Because the cotton is heavy, it can be a little difficult to slip two stitches and then knit them together.)

Knit one row.
Dec. 1 st. at shoulder edge every other row until 5 sts. remain. (For these decreases, you should knit the last two stitches together.)
Knit one row.

(Right side) Dec. 1 st. at neck edge and 1 st. at shoulder edge. 3 sts.
Slip these 3 sts. to a dpn and work an I-cord for approximately 12 inches. Fasten off and run end down through middle of I-cord. Don’t worry if the I-cords look a little wonky. A firm tug will usually straighten them out and after the bib is washed, you won’t even notice! A good tutorial for making the I-cords can be found here: http://www.knittinghelp.com/videos/knitting-tips

Join yarn to neck edge and work right side to correspond to the left side. 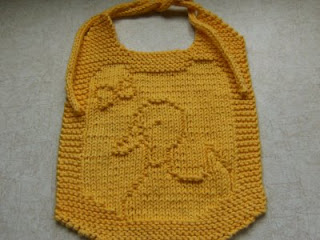 This is so sweet! I don't know how you do it...all these beautiful designs.

I have a baby shower in 2 weeks. I can get this bib done in time, and perhaps the washcloth too!