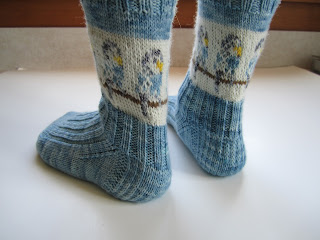 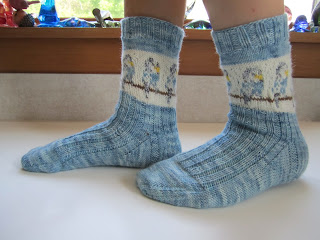 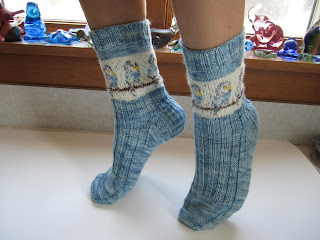 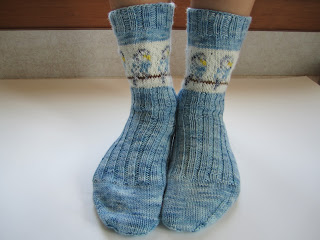 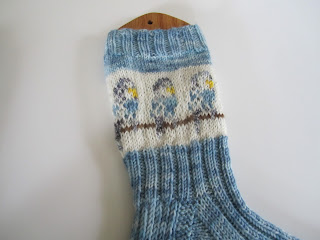 Wow, I'm overwhelmed by the response to this little t-shirt.  Fortunately, I have some very nice friends, one of whom is my pal, Tim, who has worked very hard on helping me perfect the Sweet Tee pattern.  You can check out his shirt by clicking here. Tim has a good eye and was able to catch some little confusing bits in the instructions.  He also had some excellent suggestions which I have now incorporated into the pattern.

In addition to Tim, I've made a new friend, Barbara, from Italy!  She sent me some pictures of her shirt and graciously agreed to let me share them with you. 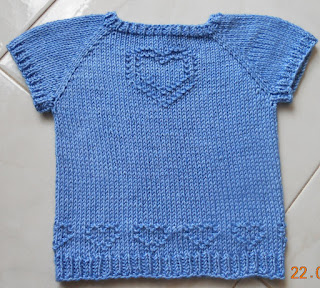 Don't you just love it in blue? 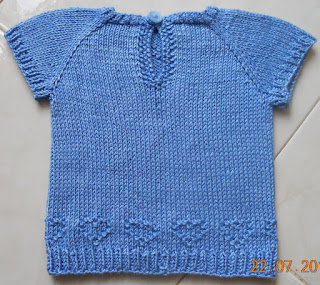 As if this wasn't exciting enough, she also knit it with long sleeves! 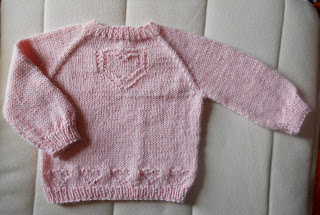 When I was knitting this myself, I thought it would be easy to make with long sleeves, but I just hadn't tested it yet.  I wanted to work out all the bugs with the original pattern first.  It's really simple to add the long sleeves though, so I think I may add those instructions to the pattern at some point.  I also have the boy's version ready to go, but I'm waiting for my yarn to arrive from WEBS .  (They were having a sale and I couldn't resist!)

I want to urge all of you to go to Barbara's designer page .  She has some amazing baby patterns.  She's so talented that I was really humbled when she wanted to knit my little pattern!  I love her Leaves of Garter Stitch and I think one of those will be making its way to my Ruthie before long!  Barbara is also going to be translating the pattern into Italian, so when I have the link, I'll share it with you.

Thank you Tim and Barbara for all your help!  And, I haven't forgot all my other friends who are testing the revised version.  Eventually, I'll be able to heave a sigh of relief!  In the meantime, if you want to help out too, the revised version is posted in the sidebar.  All you have to do is click on the picture and it will take you right to the pdf file.
Posted by Elaine at 3:25 PM No comments:

I thought I better clarify, once again, that the Sweet Tee pattern HAS NOT BEEN TESTED.  I tried to think of someone to ask/beg to help me out, but it didn't happen.  Now, I have lots of knitters offering to help.  My friend, Tim, has already started and it didn't take him long to discover a mistake in Row 4.  I have corrected that row in the pdf and have highlighted it in red.  As you may have noticed, I have a separate picture of Sweet Tee at the top of my right sidebar.  As I learn of each mistake (hopefully, there won't be too many!), I'll post the date of each correction (and I'll highlight it in red), so you'll know you have the latest version.  Once I know that all the bugs have been worked out,  I'll post the fully corrected pattern.  In the meantime, a huge thank you for all of my friends who have offered to help.  Please if you find any errors, email me so I can add those!

Yes, I am working on a boy's version, but that won't be posted until we get this one straightened out!!
Posted by Elaine at 8:56 AM 2 comments:

At last, here is the pattern for the little t-shirt.  When I first posted the pictures, I had no idea how difficult it would be to write up a pattern!  It's a very easy  to knit, but not so easy to explain!  I hope that in my efforts to make it understandable, I haven't complicated the issue.  Please note that this has not been test knit!  I'm hoping that some of my dedicated followers will be able to help me out with the testing!  I've knit it about six times, but the real test will come when another brain tackles it! 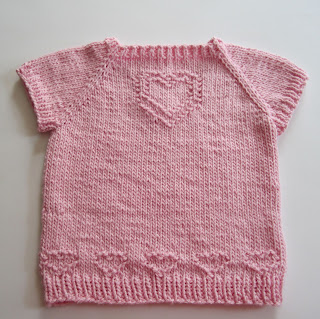 The shirt is knit in the round and the only finishing, other than weaving in ends, is a little button loop at the neck. You begin by knitting back and forth forming the placket as you go and then, when you reach the required depth, you switch and knit it in the round. 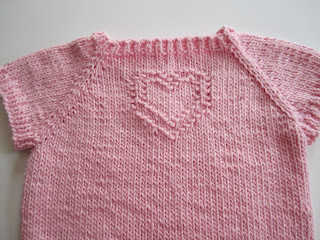 The placket is made by making seed stitch borders and, after joining to knit in the round, the stitches are tapered down to a point.  It lays nice and flat without any bulk. 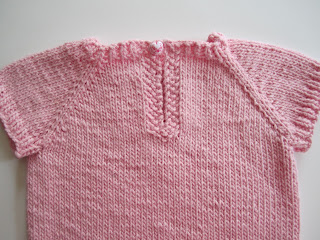 The pdf file is located in the sidebar under "Miscellaneous" or you can just click here.

I do have lots of ideas for variations, but I haven't included them in this pattern.  I want to wait and make sure that the pattern is correct, before I start offering other designs!  I hope you enjoy it and will help me out with testing it!

I bet some of you were wondering if you'd ever hear from me again!  I'd like to have a good excuse for not posting earlier, but the truth is I was just burnt out.  I had absolutely no desire to knit anything.   I didn't feel like reading about knitting or writing about it!   I think a lot of it was an accumulation of failed projects.  Everything I tried to knit, I ended up ripping.  Remember the ladybug soaker?  Too small.  My daughter-in-law did squeeze poor Ruthie into it, but I think it was just for my sake and just for that one day.  It was pretty obvious it didn't fit. Add to all of this, a root canal to just add to my lousy mood!

This was going on for a couple of weeks, when my youngest grandson came to visit.  Marty has a little stuffed animal that he calls his "baby".  It's not very big, but he was dragging this huge crocheted blanket around in case his baby was "cold".  I told him he needed a smaller one, so he said maybe I could knit him one!  Oh dear, how could I say no?  He told me his baby's favorite color was yellow, so we checked out my stash and came up with an intense egg yolk yellow.  Since he was spending the day, I started on it.  It was only about 14 inches wide, but Marty said it was too big, so I had to rip (again) and start over.  This was actually a good thing, because I only had to make it 12 inches, so it went a little faster.  Not fast enough for him though.  We were sitting on my front porch and he remarked that it sure was taking a long time!  Fast forward to dinner.  I was trying to bake something in the oven, I had food on the grill and something on the stove.  Older brother Jack was calling me to go outside on our deck, while Mickey was calling me from the bathroom.  In the midst of all this, Marty marches into the kitchen and demanded to know "Why aren't you knitting, Grandma?"!!!  Too funny.  The blanket did get finished the next day, but I didn't get a picture, since it was snatched up immediately.  I think this was the kick I needed to get going again.

As for that tee shirt, I started writing up the pattern, but I discovered that I didn't take enough notes.  I promise that it's really simple to knit, but not so simple to explain.  I also had a great idea for knitting and finishing the placket at the same time.  It's so much easier than trying to crochet around the edge.  I don't crochet well, and I know that I'm not alone.  The knitted placket looks nicer and lays nice and flat.  I have no choice but to knit another and try to clarify the instructions.  This afternoon looks to be quiet, so I'm hoping to be able to get going on it today!

Finally, here's at least one picture of a recent project that worked out! 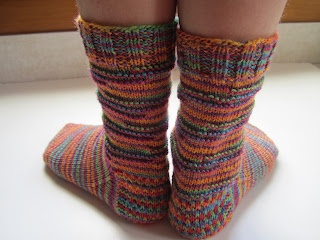 This is Kathleen Taylor's pattern called "Purl When Ready" from her Big Book of Socks .  The yarn is Lorna Laces' Solemate.  Basically, you pick out a color and whenever you come to it,  you purl that one color.  It makes an interesting pattern. 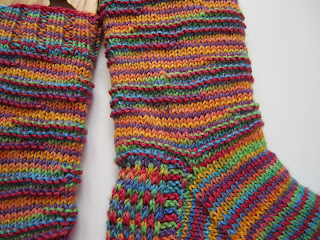 You do have to pay attention though.  If you're engrossed in watching a tv movie, it's easy to forget that you're supposed to be purling a specific color!  I left the feet solid so it would be smooth inside shoes.  I did an eye of partridge heel and they are just fun, quick socks.  Jack wanted a rainbow and this meets that request.

I'll start to work on the shirt this afternoon.  I'd ask if anyone would like to test knit it, but since I intend to offer it for free, maybe I'll just post it as is and wait for feedback! ﻿
Posted by Elaine at 11:36 AM 4 comments: