Is there anyone who hasn't heard or seen those Angry Birds?  Truthfully, I had never even heard of them myself until my grandsons started going on and on about them.  My son has one of those phones that has everything including the Angry Birds game.  (I have a cell phone too that actually lets me make phone calls and occasionally take a picture of my ear!)  The boys are crazy about these birds so I guess it was just a matter of time before they asked for one on a hat.  Mickey likes the blue bird and Marty's favorite is the white one. 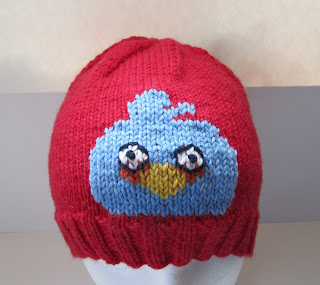 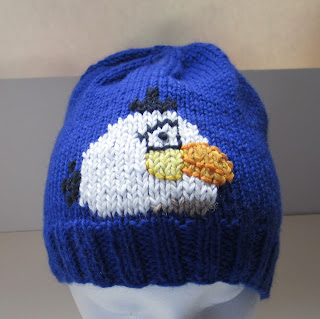 Mickey loves his hat and Marty, well. . . Marty hates his!  I don't know what his problem is exactly.  At first I thought maybe it was a little too long.  I wanted him to have a little growing room, but I ripped it back and made it a true beanie hoping this would help.  It didn't.  He just said he didn't like it and tossed it aside.  Oh well, at least I tried and who knows what a four year old wants!

Now my oldest, Jack, likes the Angry Birds, but his favorite bird is actually his new parakeet named "Fred".  I was keeping my fingers crossed that he wouldn't ask for a hat with a parakeet, because I had no idea how I would pull that off.  No such luck.  That's exactly what he wanted! 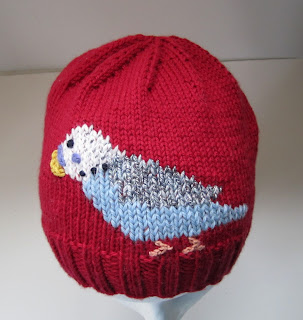 It actually came out fairly well and Jack just loves it.  I had some variegated sock yarn that was perfect for the wings.  I ended up using duplicate stitch for all the hats.  I really don't like hats with seams and this seemed the easiest way around that. 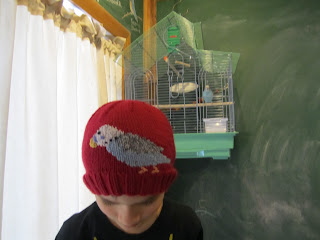 Now, before you ask, I'm happy to share my charts for the Angry Birds, but these designs are licensed and so you won't be able to use them for anything except your own personal use.  You can't sell items made using the charts and you can't repost the charts.  The chart for the parakeet is different as that is totally mine and I don't care if you use it to make money, as long as you don't post the actual pattern.  All of these patterns do have some embroidery to add details and these are not included with the chart.  Still, you should be able to figure it out without any problem.
If you look closely, you can see Fred peeking at the camera from his cage!  You also can detect just the slightest grin on Jack.  As I said, he's very happy with his cap!
Two out of three's not bad!
Posted by Elaine at 11:19 AM 5 comments: 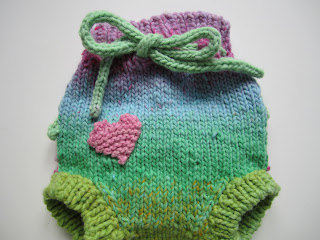 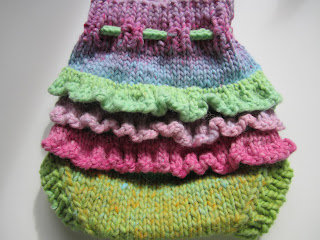 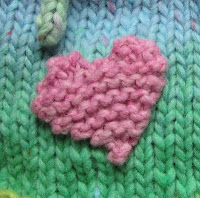 While I was waiting for little Ruth to arrive, I started knitting up some "girly" soakers.  I had an idea for a soaker with hearts and it came out kind of cute. 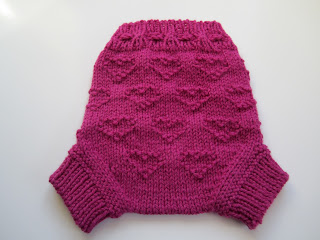 It's just a generic soaker that used 80 stitches to begin with and the hearts repeat every ten stitches.  I used some Cascade 220 wool in my stash. 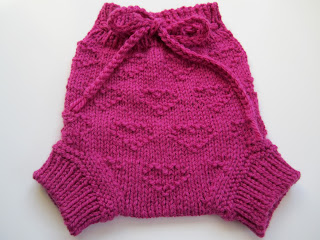 ﻿However, while I was knitting it, I thought this pattern might also make a cute bib and cloth. 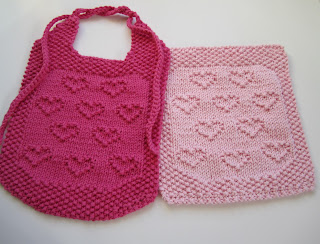 It's so simple that I almost feel guilty about how quickly I came up with the idea.  It hasn't been test knit, but once you get going, you almost don't need the pattern! You can look at your knitting and know what's coming next! 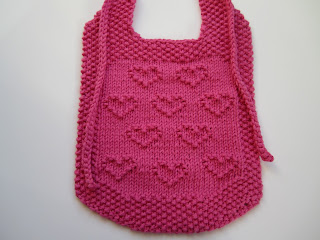 ﻿
The bib was knit with Peaches & Creme in Shocking Pink.  Wouldn't this be cute for Valentine's Day too? 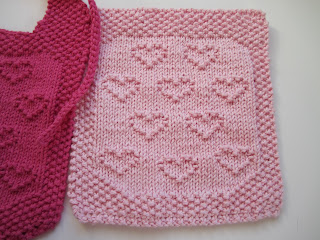 The pattern includes directions for both the bib and the cloth and has a chart.  I'm putting the pattern in a pdf file in both the updated cloth and bib files, so you can find it in either spot.  Or, you can just click here for the pdf.  I hope you have fun making this for your little sweetheart too!

At four days old, Ruth Anne now has a nickname.  My son (and her father), who is a huge Yankees fan, calls her "Babe Ruth", which of course leads to "The Babe".  He says that wasn't his intention when they picked her name, but I'm not so sure.
Posted by Elaine at 12:36 PM 13 comments: