Before I share the saga of my latest project with you, I just want to address the comment that was left for me a few days ago.  It was brought to my attention by Kerry that, apparently, one of you (maybe more for all I know), has been selling my patterns.  I can't believe that someone would take advantage of me in that way, but then again, there are a lot of low lives out there.  I especially feel sorry for anyone who was gullible enough to purchase one.  All I will say is that it's a round world and what goes around comes around.  I'm sure you'll be punished in good time.

On a happier note, my neighbors across the street have a new baby girl!  The mom went to school with my oldest son and so I've know her for a good many years.  She didn't want to know the sex of the baby ahead of time, so I wasn't able to get started early on a project.  She was born a week before Christmas and even if I wanted to drop everything and knit for her, I just didn't have time.  I started by choosing this gorgeous yarn by Holiday Yarns. I already had a skein of sock yarn in the colorway "Rose Garden", so I thought it would be neat to make a sweater out of some DK weight.  Once I decided on the yarn, I had to choose a pattern.  I found this sweet sweater on Ravelry called "Olearia".  (Olearia is a native Australian flower.)  It was just the weight I needed and I loved the design.  I started it, but after getting about half way with it, I started having second thoughts.  It looked really huge to me. 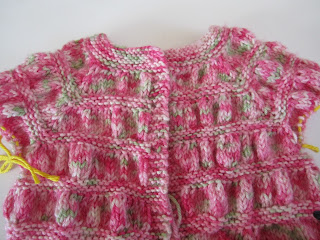 So, I reluctantly decided to choose another pattern and start over.  Instead of ripping this one out though, I just used the second ball of yarn that I had.  The second attempt was this easy Seamless Yoked Sweater a free pattern on Ravelry. 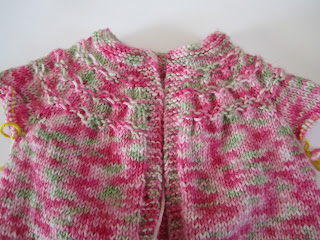 It was okay, but when I reached the same point as the first sweater, I realized that they were exactly the same size!  I really loved the Olearia, but I thought the ruching was too long.  I decided to go back to the first sweater and rip back the last pattern repeat.  It looked a little more dainty to me. 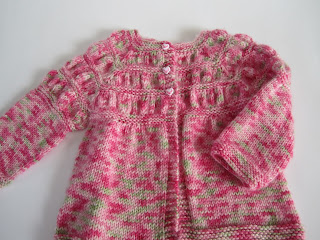 I really love the way this came out after a rocky start.  The yarn is so soft and after it's washed, it's even nicer.  I wish it wasn't quite so pink, but it's perfect for a little sweetheart.

I couldn't find a hat that I liked, so I made up one!  It's pretty simple.  I cast on 144 stitches and purled one row, knit one row, purled one row, then knit for about four rows.  The next row I knit 2 tog. to get down to 72 stitches. 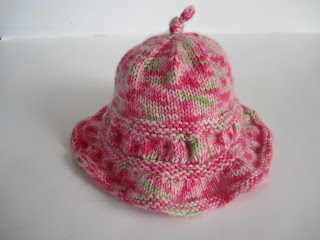 I then just repeated the purl-knit-purl sequence until I had three ridges and worked one repeat of the pattern.  When the hat was about 3 1/2", I started the decreases.  k6, k2tog, around.  knit one row. k5, k2tog. around. knit one row, etc. until I had a few stitches left to knit a two inch I-cord and then tied it in a knot.  If she's like most babies, she won't keep it on her head anyway.  I like a little brim on a hat and this is just what I had in mind.

I finished up the set with some matching socks. 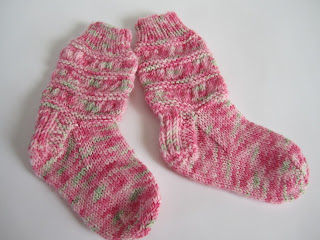 This is the same colorway, as I said before, only it's in the FlockSock.  This was a little more trial and error.  When I followed the ruching instructions, it was way too puffy, so instead of increasing in every stitch, I just knit one stitch and then increased in the next. 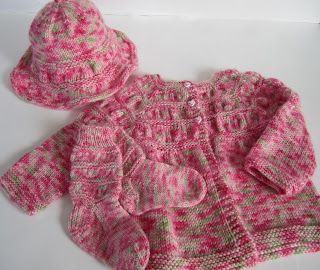 All in all, it's a pretty set.  I don't usually buy baby patterns as I have so many books and leaflets as it is, but this one was just so darn cute.  There are tons of sizes and lots of variations.  Short sleeves, cap sleeves, etc.  It's really well written and there are lots of pictures.  I will say that the ruching is a bit tedious, but the effect is well worth the effort.  I'm sure I'll be making another one of these in some form for my Ruthie.  She's even cuter than the sweater!
Posted by Elaine at 12:54 PM 12 comments: