Maureen sent me this picture of the beautiful blanket that she knit for her niece's new little baby, Henry. 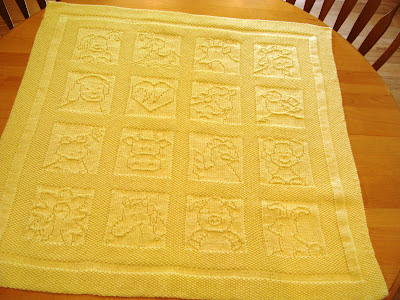 It's it just gorgeous and didn't she do a wonderful job knitting it?  That is one very lucky (and warm) baby.  Maureen tells me that she used Berroco Soft Vintage in yellow.  She knit the hen by looking at the picture of the one I did for my Ruthie.  It reminds me that I still haven't posted those patterns yet!  They need to be tested and I have a slight recollection that someone offered to help me, but I haven't had time to go back through my messages to see who it was!  Maybe it was Maureen!!

I also want to direct your attention to this blanket pattern that was posted here on Ravelry.  It's a free pattern download.  She has used 27 stitches for each design block.  This would work nicely with many of my patterns as I use 37 stitches.  If you eliminate the borders, you have 27 stitches.

Finally, here is one more link of yet another blanket here.  Mandy put her blanket together by crocheting the squares.  (I think you may have to be signed onto Ravelry to see it.  If you aren't a member, you should be!!)

This has been so much fun for me to see all these wonderful blankets.  I love the distraction.  To update you, my husband came through his surgery just fine and is already off the pain meds.  Of course, he has to keep his leg in the cast for six weeks, so we'll see how he does once he starts physical therapy.  We may have to break out the pain pills once again!  For now, we're taking it one day at a time.  He can't really move without my help which means no work for either of us!  ("Work" as in gainful employment!)  Fortunately, we both have nice bosses so it isn't an issue. . .yet!  Thank you for all your nice notes and wishes of encouragement.  They mean a lot to both of us!
Posted by Elaine at 11:24 AM 9 comments:

I wanted to let you all know that there is going to be a slight interruption in posts on my blog for awhile.  My husband had an accident while hiking in the woods in back of our house the other day and is having surgery this week.  At first, they thought he had broken his leg, but instead he's torn his quad tendons which are above the knee.  These are the tendons that let you lift your leg.  It's going to be a long recovery.  They tell us that the surgery isn't too bad, but the rehab isn't fun.  He's looking at three to four months before it's over.  He's an active guy and an experienced hiker, so why he chose to wear his sneakers this time instead of his hiking shoes, I'll never know!  Fortunately, he did have his cell phone so after he realized that he couldn't move, he called the police and told them to dispatch the fire department.  They had to hike up to him on the trail and carry him back down. The one humorous note about all of this is that he used to be the fire chief here in town and he had to endure lots of good natured ribbing!  After he called the police, he called me and asked if I happened to see the fire truck go by the house.  When I told him that not only did I see the fire department, but also the police!  I was expecting him to tell me what was happening in the neighborhood, as he often has a portable scanner with him.  I wasn't expecting him to tell me that they were coming for HIM!  We're fortunate to have such a dedicated volunteer fire department and ambulance squad in our town.  Even a crew from the neighboring town showed up to help!

In any event, I now have to do everything for him.  He literally can't move his leg, although he can hobble around on crutches once I get him up.  My husband is always puttering around the house doing laundry, emptying and loading the dishwasher, vacuuming, mopping, etc.  Now, I get to do everything, not only around the house, but also for him.  It's a lot of running and fetching!  With all of this, I've discovered that I just don't have time to knit.  I've only managed to knit a little bit when he was having a MRI.  This isn't good (for me!) but it's also going to put a damper on blogging temporarily.

I do have this yarn that I bought a month ago.  It's from Lorna's Laces and is called "London 2012". 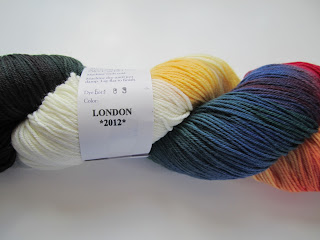 I've always loved watching the Olympics, so when Jimmy Beans Wool came out with this limited edition, I had to have it.  They ran a fun promotion to go along with it.  For every gold medal that the United States won, the price dropped a dime, a nickel for a silver and a penny for a bronze.  The more medals, the cheaper the yarn!  Two reasons to root for the home country!!  The yarn was shipped the day after the Olympics ended.

It has all the colors of the Olympic rings, but I will admit that I was a little disappointed when it arrived.  The colors kind of blend together in spots and it looks muddy here and there.  I was hoping that the colors would be brighter.  Still, I think I'll make socks for my eight year old grandson, Jack.  He would call me up when he saw the Olympics were on and we would watch them together.  It was fun listening to his running commentary.  I think he'd get a kick out of having Olympic socks. 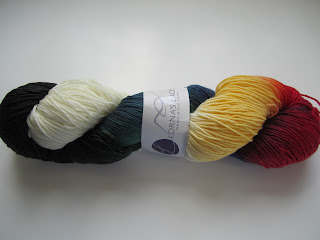 Now, I just have to come up with a pattern.  Any ideas?  I'm kind of leaning toward Aero. I know it's a pattern for ankle socks, but I think it would be easy to convert to regular ones.  I want something fairly simple that I can pick up and put down easily, as I'll be doing a lot of jumping up and down over the next few weeks!

In any event, I promise to be back as soon as time permits!  I always try to post a pattern on my birthday (next month) and I'll definitely be doing that!  I have it on my needles now!
Posted by Elaine at 1:24 PM 8 comments:

I wonder if anyone had trouble accessing the patterns for a couple of days?  You might have heard that someone hacked the BigDaddy website and caused major headaches for websites everywhere.  I also use them to host my patterns through my website. Things seem to be okay for now and hopefully, they've taken steps to make sure that it doesn't happen again.  I apologize if you had problems, but for once, it wasn't my fault!

In any event, here is one of my new patterns. 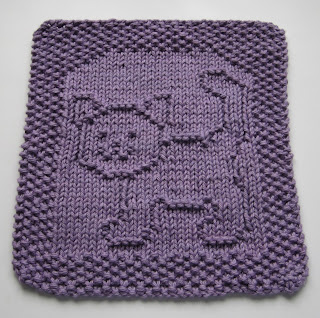 I seem to have a lot of trouble with cat patterns.  I don't know why, but they're just difficult for me to do.  I only have a few number of stitches to work with, so it's sometimes hard to get the detail that I'd like and still make the creature recognizable!! 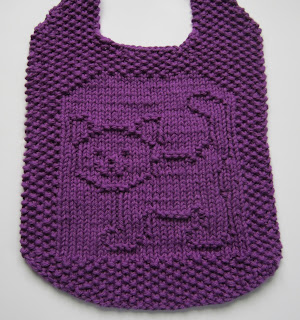 Since so many knitters are using the patterns in blankets, I'm trying very hard to keep the stitch and row counts the same so they can be easily mixed and matched.  Deb just posted a picture on her website of a lovely blanket she made using my patterns.  You can check it out by clicking here .  I love seeing all of your pictures, so keep sending them!! 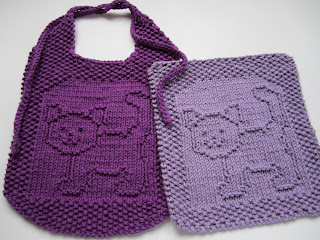 Both patterns are in the sidebar, or you can grab the bib by clicking here.  The cloth is here.
Posted by Elaine at 11:16 AM 7 comments: