Our new little granddaughter made her entrance into the world yesterday in the wee hours of the morning.  We weren't expecting her to arrive quite so soon, but we're delighted that she's here.  I'm also delighted that all of the ultrasounds were correct and that she is, in fact, a girl!!  A healthy girl at 7 lbs. 4 oz. with light brown hair.  Her name is Ruth Anne and you'll have to take my word that she's adorable.  My son and daughter-in-law are very protective of all the children and so we don't post pictures of them, however, I do have proof that she is here. 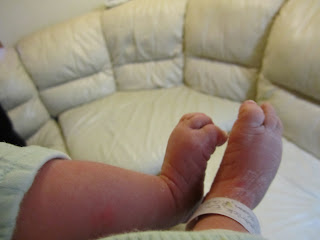 ﻿
See those cute little feet?  I guess she didn't get the memo that she was supposed to wait to arrive until after I finished her blanket!  It doesn't matter though, since she did come home wrapped in the most beautiful lavender blanket made by her other grandma!
I want you all to know that I did thoroughly check her hands and fingers and I'm positive she'll have no trouble holding a pair of knitting needles!
Posted by Elaine at 12:46 PM 11 comments:

Sheep in the Meadow

I thought I would share a little soaker I made for the new little granddaughter (due date is this Thursday!!).  I used just a basic soaker pattern like the free Snapdragon one and did my own thing! 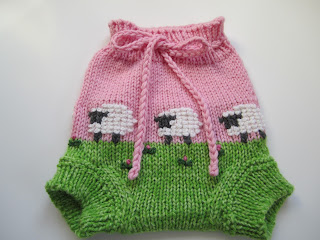 The yarn is some Cascade 220 that I had in my stash.  I'm not sure how I ended up with the pink but there it was!   As you can see, I knit part way down and then switched to a pretty green to finish it off.  The lambs were duplicate stitched after it was done. 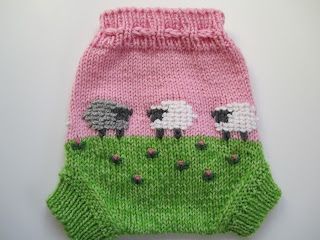 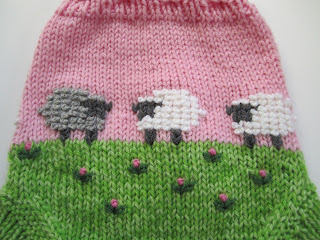 I'll post the chart for the lambs in the sidebar under "Miscellaneous" for anyone who might like it.  The pattern repeats over 12 stitches, so you may have to add or subtract extra stitches to space the sheep out on your project.  I think they'd look really cute along the base of a sweater too!  Or you could knit some mittens and have a little lamb on each mitten facing each other.  Lots of possibilities.  Wish I had lots of time to explore them all!
Posted by Elaine at 2:22 PM 5 comments:

Yay!  I did it.  I finished knitting the replacement blanket in record time. 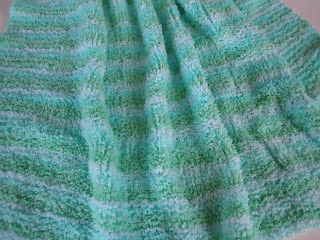 ﻿
It took me two and a half days of constant knitting, but I managed to finish it by last Sunday.  The whole family was gathering for a celebration of the three January birthdays in the family and I thought it would be so great to be able to hand it over to Mickey much sooner than he expected.  As a matter of fact, when I gave it to him, he just looked at me and asked if it was really done!  When he discovered that it was, it never left his side the whole day!  I don't know when I've ever seen so happy!  It made me want to cry just looking at him. 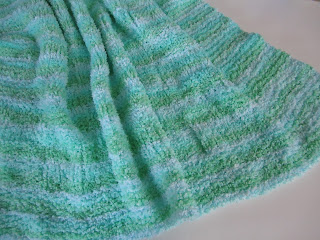 So, for those who are interested in the details.  I used about 3 1/2 balls of Sirdar's Snowflake Chunky yarn.  I cast on 91 stitches with U.S. Size 11 needles and knit 18 rows.  Then I did a kind of checkerboard pattern.  I knit 14 stitches then 9 stitches in purl, 9 stitches in knit, etc. and ended with 14 knit stitches.  On the next row, I knit 14 stitches, then knit 9 stitches, purled 9 stitches, etc. and knitted the last 14 stitches.  I repeated this for 12 rows, then I alternated the blocks for the next 12 rows, until it was long enough, and finished with 18 knit rows.  Really simple.  You don't see much stitch definition with this yarn, so there wasn't really a point of doing anything fancy.  The blanket ended up being 40" by 38".  A perfect size to snuggle under your chin, especially if you're young!
Can you believe that I forgot my camera to record the moment??  It doesn't matter, because that grin will remain in my memory forever!
Posted by Elaine at 2:59 PM 5 comments:

Thank goodness last year is over.  I'm so happy to move on.  With my husband's illness, my sister-in-law's unexpected death, Thanksgiving, Christmas and all it's stress, it's no wonder I ended up with bronchitis and pneumonia!  Happily, I'm back, but way behind both in blogging and projects.


I managed to finish knitting the new blanket for our soon-to-be granddaughter, but I haven't had a chance yet to block it or to run in all those ends, so you'll have to wait for that.  I'd like to share with you how I put it all together, but that's material for a later date.  Instead, I thought I would just share my three quick Christmas projects.  As a general rule, I don't knit for my family, but this year, I made an exception.
First I made a pair of fingerless gloves for my daughter-in-law.  She has a new winter coat, and I thought she might like a new pair of mitts to go with it.  The pattern is Mitt Envy.  This is my go-to pattern when I want a quick pair that also looks really nice!  Unfortunately, they don't look quite as nice on my wide hands as they do on Emily's slender ones, but remember it was a gift so I had to be the model! 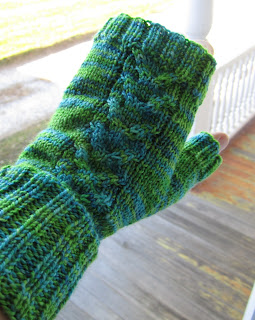 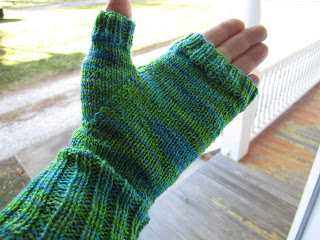 The yarn is by the former company, Sereknity,﻿ which is now called Mad Color Fiber Arts.  It's their Good Harbor yarn made up of wool and seacell.  I'm not sure exactly what seacell is, but I do know that the yarn was wonderful to work with and it has a very pretty sheen.  This color was "Dragonfly".  I made the cuff longer and I lengthened the start of the thumb gusset to accommodate her long fingers.  I also reversed the direction of the cable.  For some reason, the cables in the original pattern bother me!
I also knit a hat for my son out of Malabrigo worsted.  The pattern is a freebie on Ravelry called "One Row Hat".  The color is Cypress which is a beautiful dark green.  In this picture, which I took outside so I could get an accurate color, the hat looks like an old gray. Grrrr! 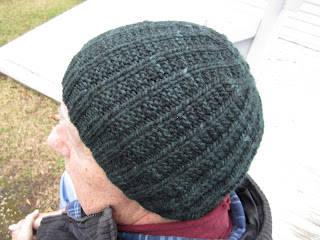 Anyway, trust me that it was much nicer in person!  Wasn't it nice of husband to model it?  He didn't mind because he knew he wouldn't have to wear it!  He's strictly a baseball cap kind of guy!
Finally, I saved the best for last.  We took my two older grandsons to a Christmas tree shop before the holiday and they each picked out new ornaments for their tree.  Because my youngest couldn't come, his older brothers also picked out an ornament for him.  He loves pandas (as you long time readers know), however, all the ornaments were of blown glass.  Before Marty could even see what his brothers had bought, it slipped and broke into a million pieces!  I decided to replace it with something that wouldn't break. 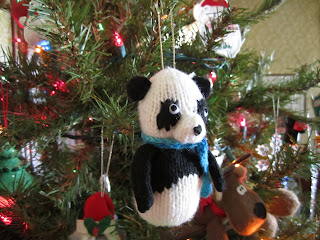 This was a cute pattern that I found on Ravelry and it's also available here.  It was a very quick knit, however, I thought it really needed some arms, so I just did a couple of small I-cords and sewed them to the shoulders.  I also crocheted a little scarf. 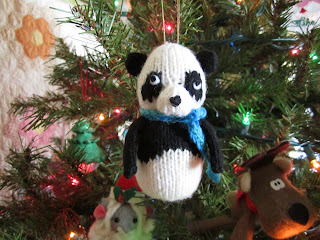 ﻿It's just some dk weight yarn scraps left over from the Nemo mittens I made him last January.
I'm now in a desperate knitting frenzy.  We had a major disaster in the family a couple of days ago.  I received a tearful call from my second grandson, Mickey.  Remember this past summer when I showed you a picture of this: 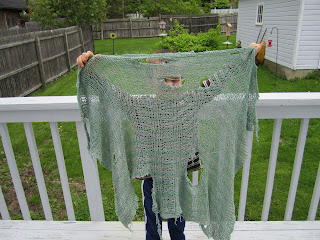 ﻿It's his security blanket that he's had since he was born.  Old, ratty, and full of holes.  I had offered to replace it as I still had tons of the yarn left, but he was content with it just as it was.  Well, his older brother and a friend were playing around and it ended up ripped in two.  Mickey was devastated and so, knowing that Grandma made the first one, would she now make a second one?
Actually, the conversation was kind of funny.  It went "grandma, how long will it take?"  Me:  "I'm not sure, blankets take a long time to knit."  Mickey:  "Yeah, but how long?"  Me:  "Maybe seven days".  Mickey:  "Oh, so a week (he's smart)"  Me:  "Maybe, but it might take longer."  Mickey:  "So you'll bring it with you when I see you next week, okay?"  Even with big needles, this yarn is a pain to knit with.  It's Sirdar's Chunky Snowflake and it sticks to itself and it's tough to work with.  You can't really get a rhythm going.  Still, I keep hearing that teary little voice, so that will spur me on.  Sigh. (Don't expect to hear from me for at least "a week"!)
Posted by Elaine at 10:26 AM 6 comments: