Are you sitting down? I don't want the shock of seeing a new post from me to be too overwhelming! It's been a long time and I was beginning to think I should just pack it in and put everyone out of their misery, but obviously, I decided to go another year! It's a little more difficult for me now that both my husband and I are retired and are on a fixed income. I have to justify the expense of hosting the website without any income! I won't sell the patterns though, so I'll have to come up with something else. In the meantime, I'll try to be a little more active.

I was trying to think of another design to fit in with the other nautical cloths I've done in the past and I thought maybe I'd do a fish, but what kind of fish? A Tunie fish of course, named after my very best knitting buddy and friend, Tunie!  She lives in Australia and has a wonderful sense of humor so she thought it was pretty funny herself. You should read the story of how she got her name "Tunie" on her profile page on Ravelry where she goes by peacockmom. It's hilarious. 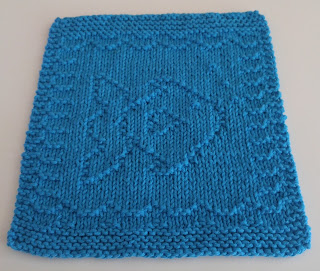 If you look close, you'll see that the side fin is actually a heart.  A special nod to my wonderful friend. 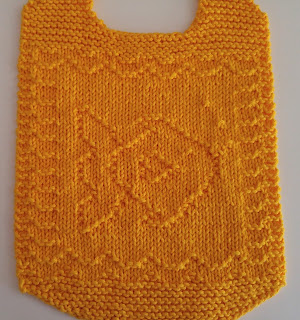 Lately, there have been a rash of blankets knitted with these "wavy" cloths. I'm still waiting to see pictures of some, but I'm just so flattered that you like them well enough to make blankets out of them! 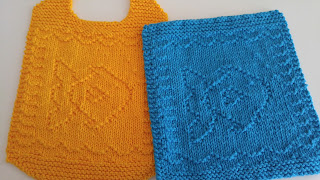 The pdf for the bib is here and cloth is here or you can grab them from the sidebar.

Hope everyone is having a wonderful summer.  Here in my little corner of New England, it's been hot and humid with no rain.  I'm so ready for a day or two at the beach! Maybe even a month. . .
Posted by Elaine at 1:55 PM 10 comments: