This pattern has been a long time coming.  I started working on it almost three years ago, but kept putting it aside as life intervened.  My grandchildren are lucky to have two sets of grandparents (at least I think they're lucky!).  My daughter-in-law's parents live on the West Coast and we live on the East Coast.  We don't get together very often, but on the occasion of the birth of our mutual granddaughter, we were able to reconnect.  Kathy, who is affectionately called "Grammy", was working on a beautiful lavender baby blanket for Ruthie. She explained how the pattern had been handed down in her mother-in-law's family.  I thought it was a beautiful pattern and Kathy graciously shared it with me.  There wasn't any need for me to knit a blanket, but I thought it would make a cute bib. 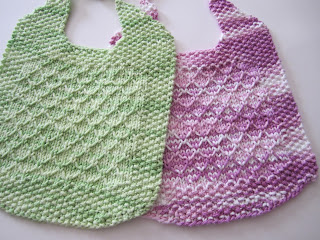 This is a deceptively easy pattern to knit.  You slip stitches and then pick them up on the next row.   The stitches form a very pretty trellis pattern.  While the pattern may be easy to knit, I realized that describing how to execute the stitch was not as easy, so I've included some close up pictures so you can see exactly how to  do it.  (It was tricky to try to hold knitting needles and a camera, but I don't think you'll have any trouble figuring it out!) 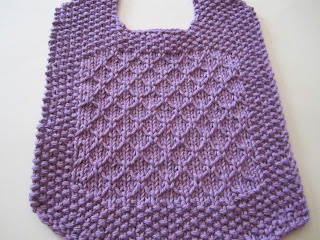 Barbara Walker has a variation of this pattern in her blue book, but this is the pattern that's been handed down in my granddaughter's family.  Wouldn't it be wonderful if someday she took up knitting and passed it on to her own grandchild.

I've also included instructions for knitting a cloth.  I didn't do separate files as you can just print the pages you need to make either the bib or the cloth. 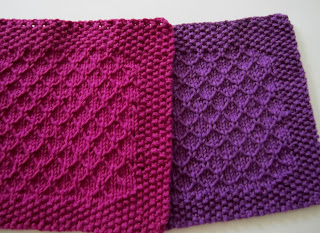 You can easily use variegated colors as well as solids.  Be careful though in choosing your yarn.  I discovered that the design does get somewhat lost in heavily variegated yarns.  Here's an example of one I knit when I was testing the pattern: 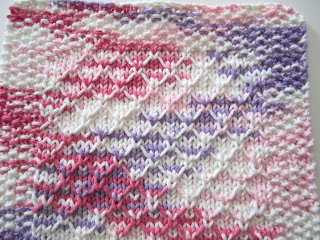 It is a little difficult to see the design.  However, in the lilac bib, it shows up much better. 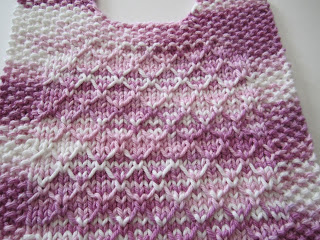 At least I think it does!  The pattern is in the sidebar.  I put it in both the bibs and the cloths.  Click  here for the pdf file.

There is one other little secret detail that I'd like to point out, if you didn't spot it yourself.  Notice how the the very top of the pattern, when combined with the seed stitch, forms little hearts?  I love that detail.  A bib with love included!

I hope you'll enjoy knitting this.  As you can tell, it's a very special pattern for my family and I hope it will be for yours as well.  Thank you Grammy for sharing!

My mom was invited to yet another baby shower and whenever babies are involved, she calls me to help her out with a gift.  This time, she specifically asked if I had any bibs.  Usually, I would have more than I know what to do with, since I never knit the ones I show here for anyone in particular, however, I decided to just give them to my neighbor for her two little girls.  The new parents won't know the sex of their baby until it's born, so mom thought bibs would be a good choice.  As for the designs and colors, she left that up to me and I decided on a rainbow! 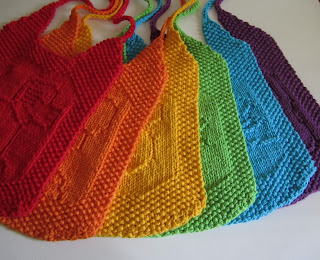 I was not looking forward to knitting that many bibs in one setting, but I actually had fun revisiting some of my old patterns. 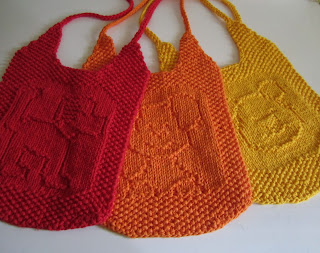 My hands were a little sore.  Knitting with cotton really tires them out, but I didn't have much choice as my mom always waits until the last minute.  She's done that her whole life and, over the years, we've used every trick we could think of to get her moving faster, but nothing ever worked. 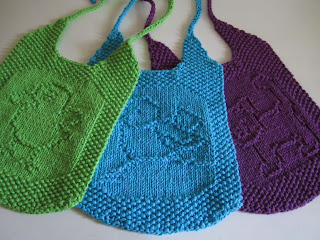 It turns out that the new mom really has a thing for rainbows.  From the time she was a little girl, she always loved them.  I didn't know that, but I'm so happy that I decided to do them. 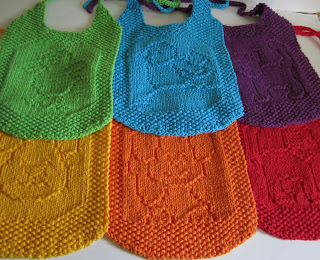 I also found out that the theme of the shower was birds.  Wasn't it also lucky that I had chosen to knit one? 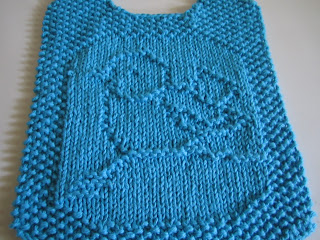 I guess some things are just meant to be!
Posted by Elaine at 10:27 AM

Hey, remember me?  I'm sorry I've been absent for so long.  I was contemplating discontinuing the blog permanently, but I've had a change of heart and so here I am!  My hope is that there are still a few followers around!  In an attempt to get back in every one's good graces, I'm posting a new pattern that I designed with my husband in mind.  There are very few people who love ice cream more than he does!  It stems, I believe, from when he was growing up and his family owned a milk exchange. They would buy milk from the local farmers and then they'd bottle it and deliver it.  In the summer, they'd operate an ice cream stand.  All of the ice cream was made by his family and drew crowds from all around. To this day, people who grew up enjoying their products, still talk about the ice cream.  My husband's favorite flavor was wintergreen and I guess it was popular with everyone else too. If I had a nickel for every time someone said that they loved that wintergreen, I'd be rich!

In any event, I hope you'll enjoy this simple cloth and will knit one or two up in your favorite flavors! 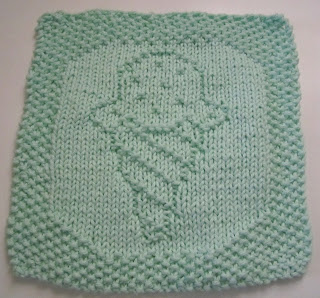 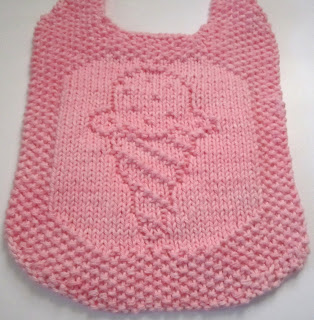 The pdf files for the patterns are in the sidebar or you can just click here for the cloth and here for the bib.

My favorite?  Well, I love brownies.  Given a choice between a brownie and ice cream, I'll take the brownie every time!

Have a happy and safe summer!
Posted by Elaine at 9:39 AM