Whew! Christmas sure went whirling by fast! I can't believe that it's come and gone already. I was rushing right up until the last minute, as usual. Every year I think I'll start earlier and every year it never happens. Sound familiar? In any event, one of the things that I generally do not do is knit gifts. I'm not so sure anyone really appreciates all the time that goes into a knitted gift, so I try to avoid adding that stress to my life. However, this year I made an exception so I could knit a little frog for my grandson, Micah. He loves red eyed tree frogs and when I saw this cute pattern called Ribbit, I knew I had to make it. It's a free pattern and the body is a tennis ball! You actually knit right around the ball. The pattern calls for each of the toes to be knit separately and then attached, something that did not appeal to me. I changed the pattern by making bobbles instead and I think it looks just as good. I also added some nostrils. The yarn is Cotton Classic by Tahki and was just lying around in my stash. I was surprised by how fast it knit up. 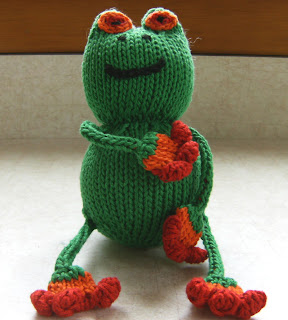 As frogs go, it's pretty cute. Of course, by making this for Micah, that meant that I had to knit something for big brother Jack. Jack is going through a snake phase. At least I hope it's a phase! I cannot abide reptiles of any sort. I even have trouble looking at a picture of them! Still, I did happen to have all this leftover yarn from the Nemo socks I knit the boys last year. The yarn stripes to look just like a clown fish. Cute little fish. Of course, it also stripes to look like a coral snake (shudder), so I decided to use it up, just for Jack. 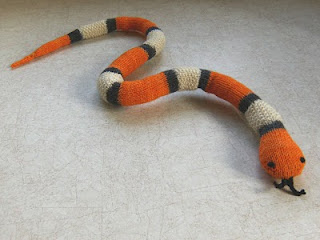 Ewwwww! It gives me the willies just looking at it. I can't believe that I actually knit it. Still, Jack really seemed to like it and he immediately hung it on his Christmas tree. Not my idea of a garland at all! 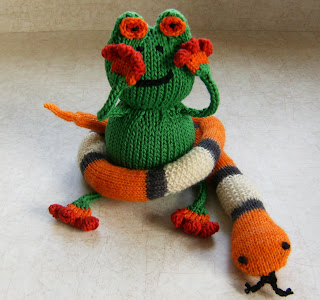 As I said, I really hope he moves past this obsession....quickly!!
On a brighter note, I thought you might like to see a couple of my Christmas presents. 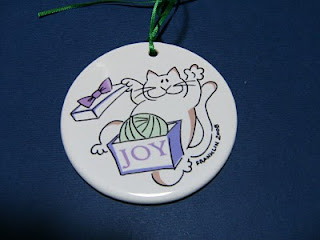 They're Franklin Habit's Christmas ornaments from 2006 and 2008. I just love them. 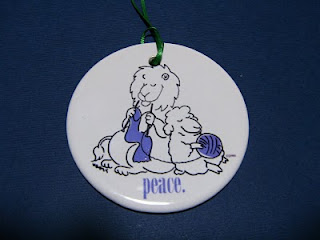 This year's ornament is cute too, but I thought I read that these older ornaments were only going to be available for a short time. In any event, if you're interested in them, you can find them here .
Finally, you have to check out what Jen did with my "Hay, Baby!" pattern. This has to be the cutest blanket ever, not that I'm biased in anyway! Click here and check it out for yourself!
Posted by Elaine at 9:46 AM 5 comments:

The Eyes Have It.

Is everyone all set for Christmas? I think I'm finally getting there! Most of my presents are bought and wrapped. Mostly now, I'm waiting for UPS and the Post Office! One of my other tasks this year was to make a Christmas stocking for little Marty. Way back in 1973, I started knitting stockings for all the children in my family, nieces, nephews, sons, grandsons. The pattern is an old Mary Maxim that had a Santa, a reindeer and a snowman. As each child has come along, I've knit a different design. The trick, at least with my grandsons, was to make something that they liked and not just seasonal! Jack's stocking has a zebra and Mickey's stocking has a train. We waited a year to see what Marty might be interested and his mom made two suggestions: a panda or a goldfish. I decided to go with the panda. I thought it might be a little easier to draw and thus, knit. It wasn't. I've struggled with the eyes so much. After five attempts, this is what the first one looked like: 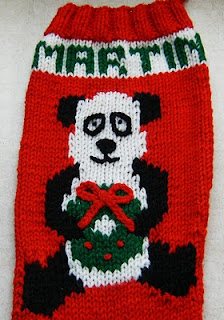 He's okay, I guess, but I decided that he really looked like he had two black eyes, and NOT in a good way! Reluctantly, I ripped them out yet again, and this time I think I've got it. I even decided to do a couple of stitches to try to define the neck. I'm sure Marty will like it. This year anyway. Next year, I fully expect him to be talking and then I might have a request for something else! In any event, we're covered for Santa this year and just in the "nick" of time!

I hope that all of you who celebrate Christmas will have a very merry one. A huge thank you to everyone for all your kind comments and good wishes. I have some really cute new designs coming up next year and I look forward to sharing them all with you!
Posted by Elaine at 2:46 PM 3 comments: