I fought the sock and the sock won....

I seem to be having a severe knitting slump. Maybe it's the weather, maybe it's life in general, maybe it's just me. In any event, my needles have turned against me and now not much is coming out the way I want it to. Take for example these little socks I'm working on for my grandson, Jack. The yarn self-stripes to look like a clown fish. Very cute and very orange, Jack's favorite color (well, it was his favorite color, this week it might be purple!) I decided to just do a basic top down sock and let the yarn speak for itself. I just didn't know it would have such an annoying voice. 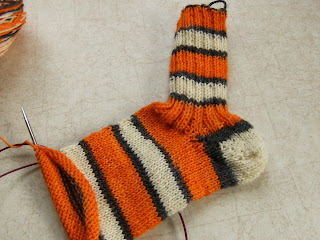 This version has been ripped out no less than five times. The heel is driving me crazy. At first, I tried doing just a plain heel flap and gusset, but the stripes wouldn't come out the way I wanted. Then I decided to try a short row heel. The stripes are more like what I had in mind, but the execution is really poor. Look at this tiny scrunched up heel! 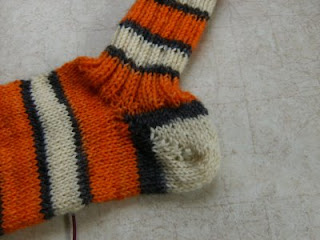 I always have trouble trying to do these heels and I don't know why. What I really need is my internet friend, Kathy, to sit beside me and show me in person. Alas, she lives in Iowa and I'm stuck here in Massachusetts. A little too far for a road trip! I guess I just need to have Jack try them on and see what happens when they're on an actual foot.
This wouldn't be quite so bad, except that I also tried a pair of socks for myself. Here is the result of three straight knitting days: 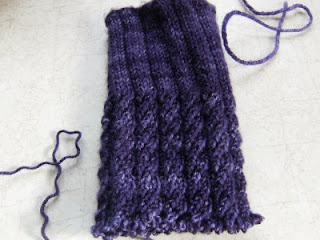 It's a very soft and pretty Malabrigo sock yarn. It's knit on tiny needles and it requires constant concentration. I never quite understood the second sock syndrome until I started this pair of socks. Now, I get it. If you look at this picture, you'll notice that there are no needles, that's because I've decided to rip the whole thing and start over with something not quite as time-consuming.
If these two projects weren't bad enough, let me present project number 3. Socks for the baby: 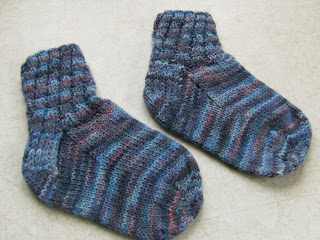 At first glance, they look perfectly fine, but after I finished knitting them and held them up against each other, this is what happened. 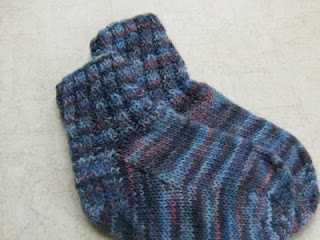 One cuff is half an inch longer than the other! Grrrr. At least this was an easy fix. Rather than ripping out one, I just knit a second pair to match! 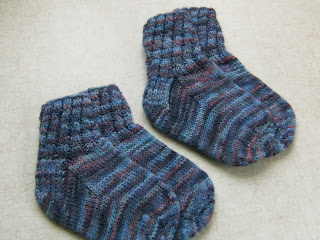 The yarn is Araucania's Ranco. Both pairs have been washed and tossed in the dryer with only a little shrinkage. I do want you to know though, that I am capable of doing some things right. Here's a pair for my grandson, Micah. 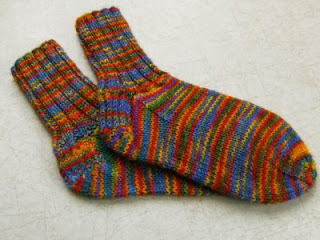 I love this yarn! It's so soft and it washes and dries like a dream with hardly any shrinkage. I'd tell you what it is, but I found it on Etsy and whenever she posts it, it sells out almost immediately, so I need to make sure that I get mine first! 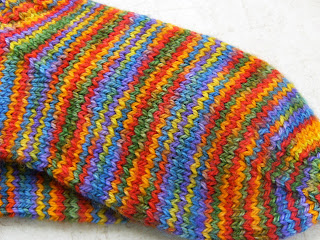 With all the cold weather we've been having, my daughter-in-law was using baby leggings to pull down over the baby's socks to keep his legs warm. I thought I would try just making him a pair that look like knee socks. 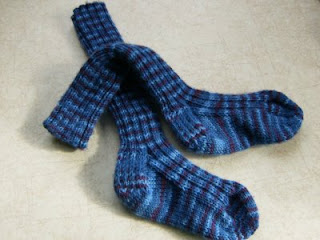 This is Knit Picks Essential yarn and is really nice and soft. I'm not sure that I have the length right, so they may have to be tweaked. Now that they're done, it's supposed to be up to the 50 degree mark tomorrow. 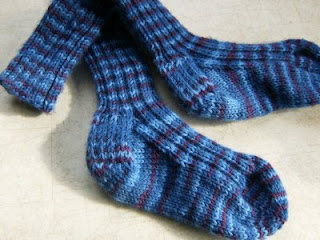 At last, I leave you with a final pair. I found a similar pattern on Ravelry, but I just couldn't justify the price of the kit, so I attempted to copy it. 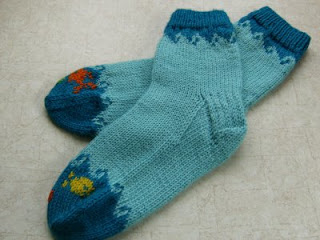 The yarn is Cascade's Heritage. My socks aren't as cute as the original, but I still think the boys will like them. 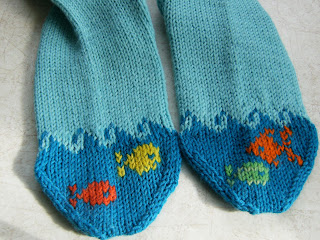 Now, I think I'll go and try to knit something other than a sock.
Posted by Elaine at 3:14 PM 3 comments: