My grandsons are just crazy about those Angry Birds.  They needed new mittens and the idea of these came to me as I was falling asleep one night!  I've been known to dream about some solution to a knitting dilemma more than once! (My husband even claims that I knit in my sleep!  This is partly true, but what he doesn't see is me ripping out everything that I knit while I was sleeping!)

These are really simple to make.  Use your favorite mitten pattern for worsted weight yarn.  I have an old pattern that was passed down to me by my grandmother, but this free pattern: Classic Mittens is almost identical to mine. 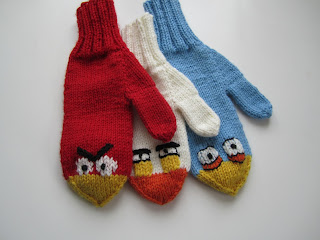 Jack seems to prefer the red bird and this was also the easiest to make. 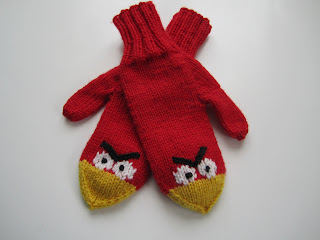 Marty, our four year old,  loves the white bird.  He has one that he carries with him everywhere!  He named it "Whitey".  Pretty, original, eh?  Whitey has his own birthday, his favorite colors, his likes and dislikes. It's like another member of the family. 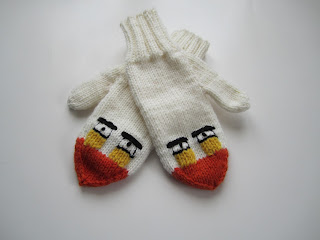 Mickey likes the blue bird. This one seems to be the least angry of the birds from what I can determine! 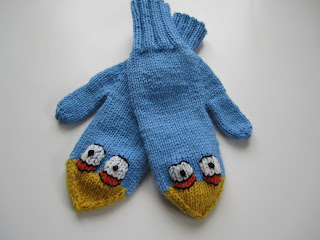 I surprised the boys with them yesterday and they were a huge hit!  I was half expecting a lecture from Marty about his white mitts as he's an absolute stickler for details, but even he loved them!

If you'd like to make a pair for your own bird lover, I've put the "recipe" in the sidebar under "Miscellaneous" patterns or you can just click here for the pdf file.  You knit your favorite mitten as you normally would until you reach about 1 1/2" from the top.  You break your main color of yarn and join the beak color, knit a couple of rows and decrease as you would for the top of a sock.  The embroidery is done before you close the mittens.  It's really basic.  Just remember that you want a left and a right mitten so be careful which side you're embroidering on! 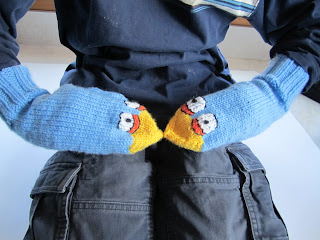 A Tale of Two Kitties. .or Three

There's a tradition in our family that started back in 1971 with the birth of my niece.  I knit her a Christmas stocking from an old Mary Maxim pattern.  Subsequently, with the addition of each new child to our family, I knit them a stocking as well. (For the record, that totals 21 stockings each with a different design.)  This was Ruthie's first Christmas and so, of course, she had to have a stocking as well.  Sometimes we wait a year to see if there's a special interest, however, it turns out that Ruthie loves kittens!  I do too, but I have a hard time designing them for some reason.  Nevertheless, I came up with this really cute kitten.  At least on paper it was cute.  Something was lost in translating it from the drawing to the graph paper.  I knew it wasn't right, but I kept thinking that it would work out once I knitted it and did a little embroidery here and there.  Wrong.  It was dreadful and here's the proof: 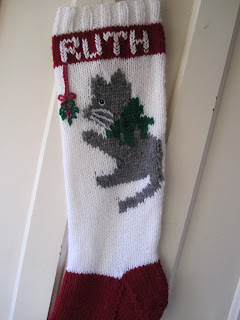 It looks like a wombat. Seriously. What's worse, I ripped it out, reduced the design a bit and reknit it.  It was worse the second time as evidenced by the above picture.  By now, it was almost Christmas and time was ticking down. I can't tell you how much it was bothering me that Ruthie would have such an awful stocking.  Some of you will say "it's not that bad", but it was.  It was bothering me so much that I decided to start all over again with a completely new design.  This time, it actually looked like a cat!  I knew I was on the right track when the gals at physical therapy checked it out and said "oh, it's a kitty!". 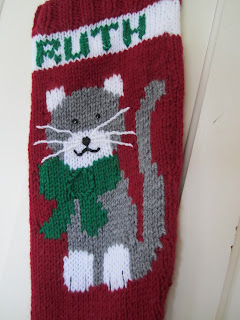 Much cuter, don't you think?  I also think it looks a little more "Christmasy".  I managed to finish it on December 23rd.  Just in the "nick" of time!

On another note, before I started with the stockings, I had decided to knit Ruthie her very own cat.  Something she could cuddle and drag around.  I found this really cute pattern on Ravelry called C is for Cat . 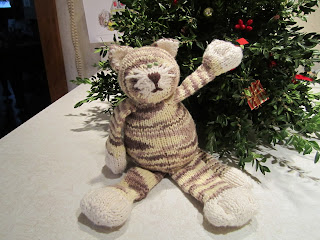 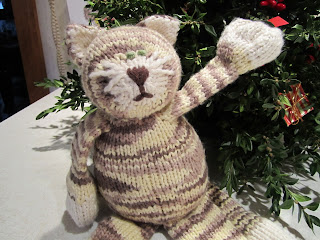 The pattern is very well written and has lots of pictures and detailed instructions so it's a snap to make.  I had a lot of fun making it.  I used Lion Brand's Organic Cotton in French Vanilla and Natural. It is so soft and surprisingly easy to knit with.  We all know how tough cotton can sometimes be! 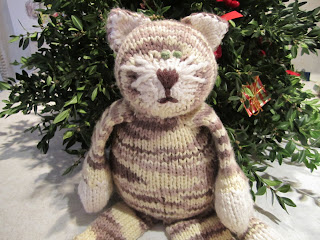 I like the way that the yarn stripes, although it was interesting that one leg had actual stripes and the other had these diagonal blocks.  I tried several times to get them to somewhat match, but for some reason, it just wouldn't work.  In the end, I decided that it just gave the cat some personality. 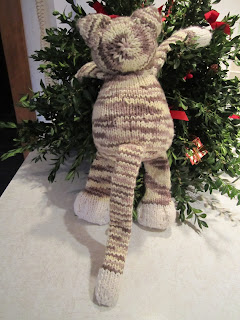 Ruthie seemed to really like it and immediately started dragging it by it's ear!  That was the whole point, wasn't it! 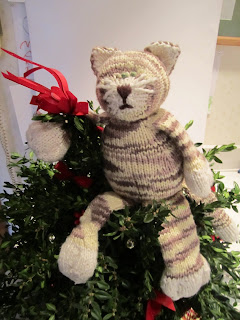 This tree that the cat is hanging out in was the only tree we had this year!  With a bed in my living room, there was no place to put our usual tree.  Our great neighbors delivered this one to us and we decided that was all we needed!  Of course, it was kind of hard to slip presents under!
Posted by Elaine at 9:36 AM 2 comments:

Wow, by now I'm surprised that any of you are even reading this.  It's been a long time since my last post.  It seems that we've had so much family drama around here lately.  My husband is still recovering nicely from his accident, although not fast enough for him.  I still have to deal with everything around the house, which now includes shoveling snow!  Ugh!  At least he can get himself dressed now (except for one sock), which is a big help!  My dad had major surgery right before Christmas and he's still not home yet.  My brother-in-law fell and broke his hip and had to have it replaced the same day as my dad's surgery!  He's also in rehab but is doing well.  Of course, I also had Christmas to deal with and all that goes along with shopping, wrapping, etc.  Oh, and do you remember that I also have a "regular" job?  Do you feel sorry for me yet?  Well, don't because I'm doing just fine, although my knitting time has been severely limited.

In any event, to make up for my absence and to hopefully, start this new year off on the right foot, here's a new pattern for you.  I had a young gal contact me on Ravelry and ask for a squirrel.  Well, she didn't exactly ask for it, but she told me how much she was hoping I'd do one.  She's only 13 and is quite the knitter.  I was trying to come up with something new and decided to give it a whirl!  So Charlotte, if you're reading this, here's your squirrel: 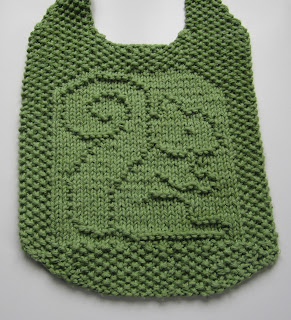 My good pal, Tunie, in Australia, test knitted the pattern so I think it should be fine.  I've included a chart with it as well.  The links to the patterns are in the sidebar under the updated patterns. 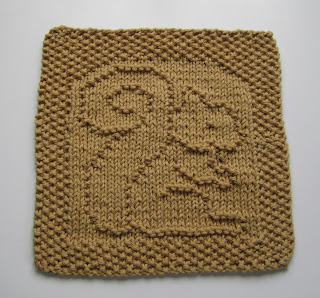 I have to admit that squirrels are not one my favorite creatures.  Those pesky varmints raid my bird feeders to distraction.  They even go into my garage to try and get at the bird seed that I have stored there.  This past summer, I had no less than ten of them in the backyard.  I decided to stop filling the feeders for awhile and let them move on to some other yard!  I miss the birds though, so I'm sure I'll go back to the feeders before too long. 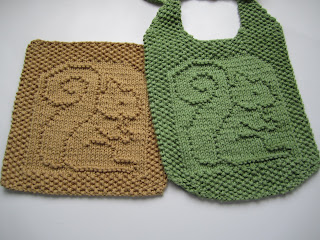 I have a couple of neat projects to share with you, but for now, I'll just say that I hope everyone has a wonderful new year and I thank you for all your support!