Remember when I told you that I was doing a lot of knitting for Christmas this year?  Well, I thought I'd just do one big picture post to catch up on what I managed to get done.  This may be the reason that I didn't do much posting!  Everything had to be kept quiet, especially since I discovered that some of my family actually does look at my blog!

I knit quite a few pairs of fingerless gloves: 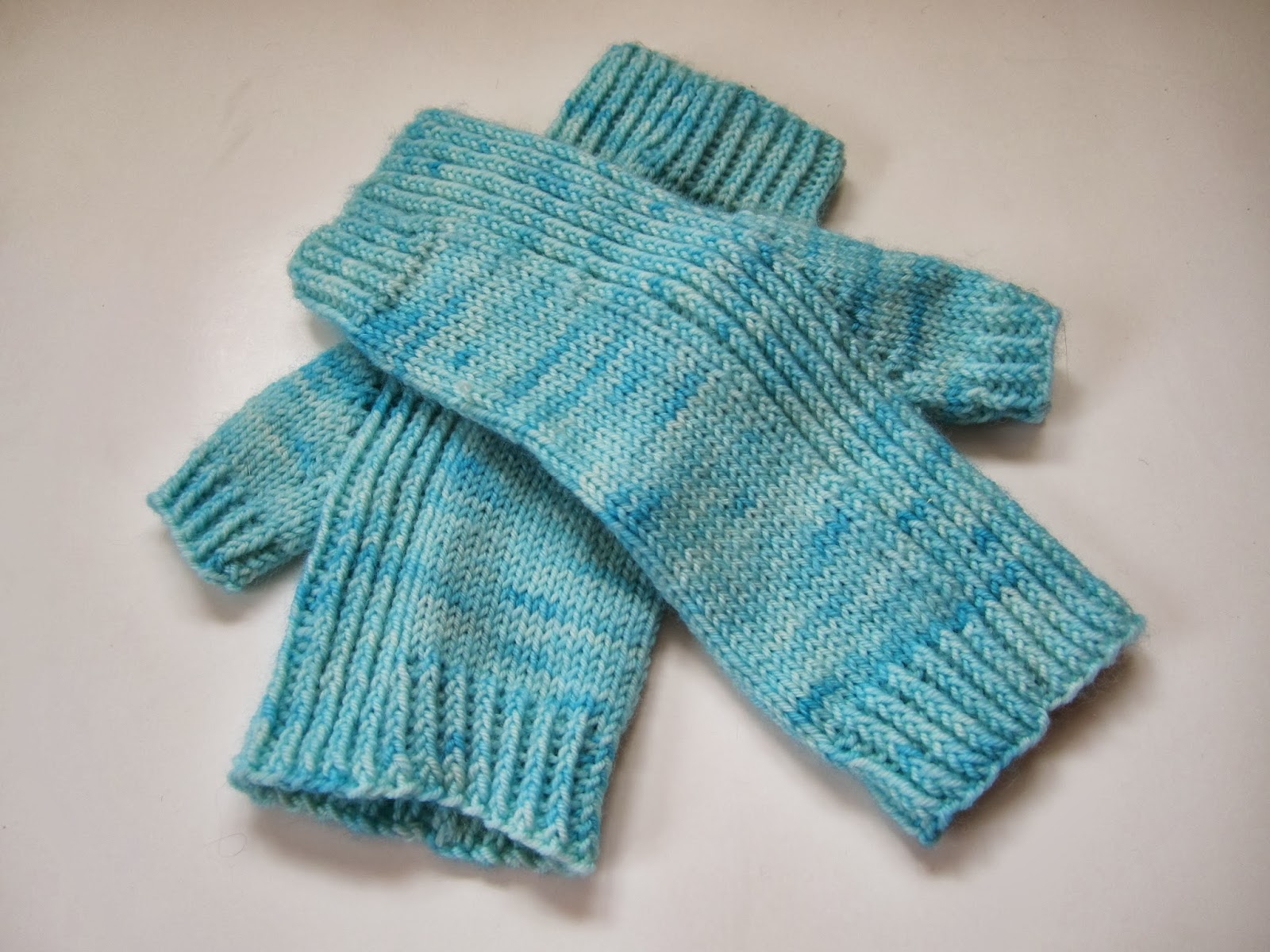 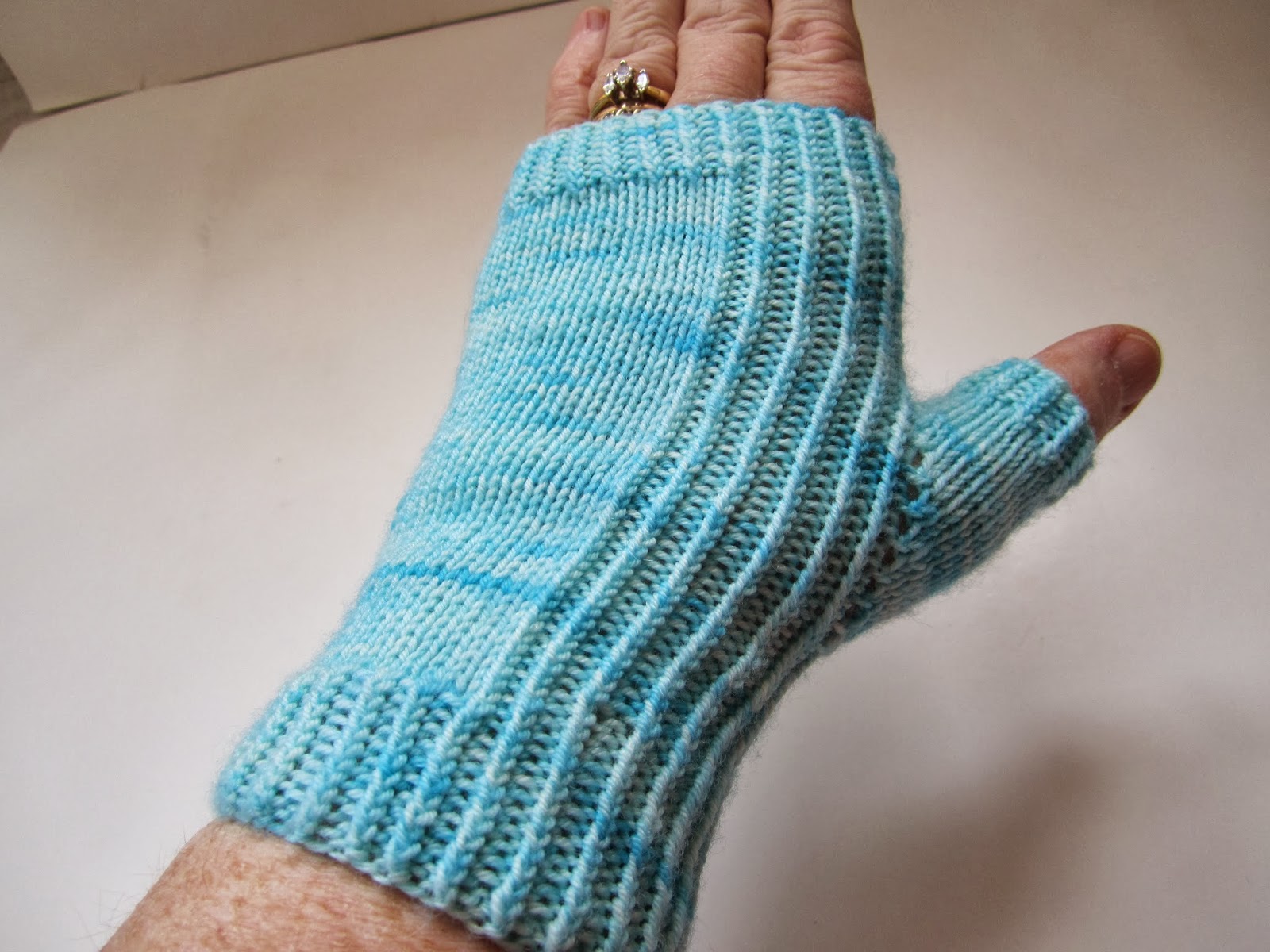 These were for my 13 year old niece, Eliza.  It's a free pattern on Ravelry called Align.  I found them to be slightly too small for my large hands, so if I were making them for me, I'd add some stitches.  They do stretch, but not much!  (By the way, Eliza has worn these every day since she opened them and has managed to already lose one.  Today, I mailed her a second pair!)

I also knit her another pair from a cute little kit I bought at the New England Fiber Festival last November. 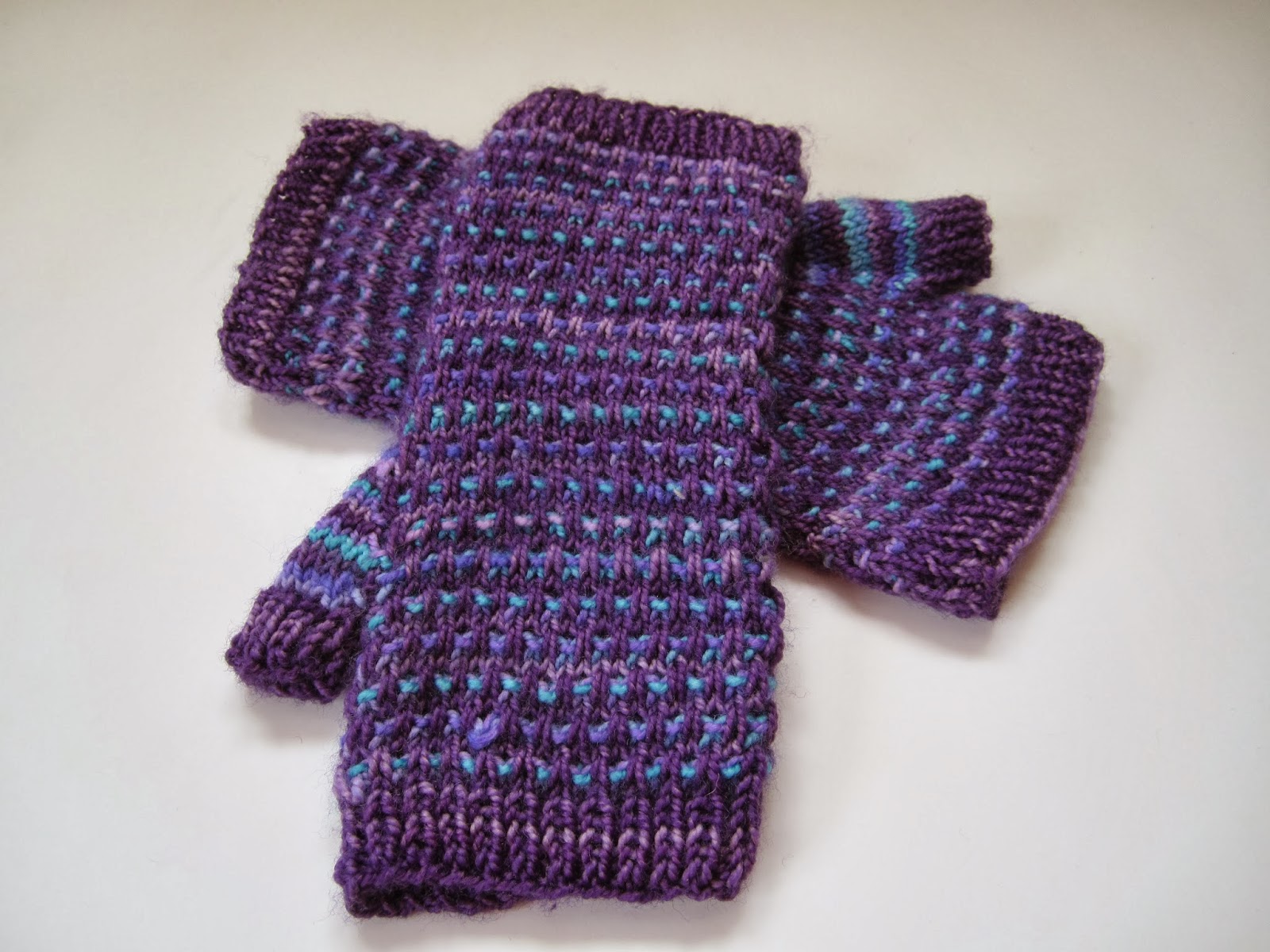 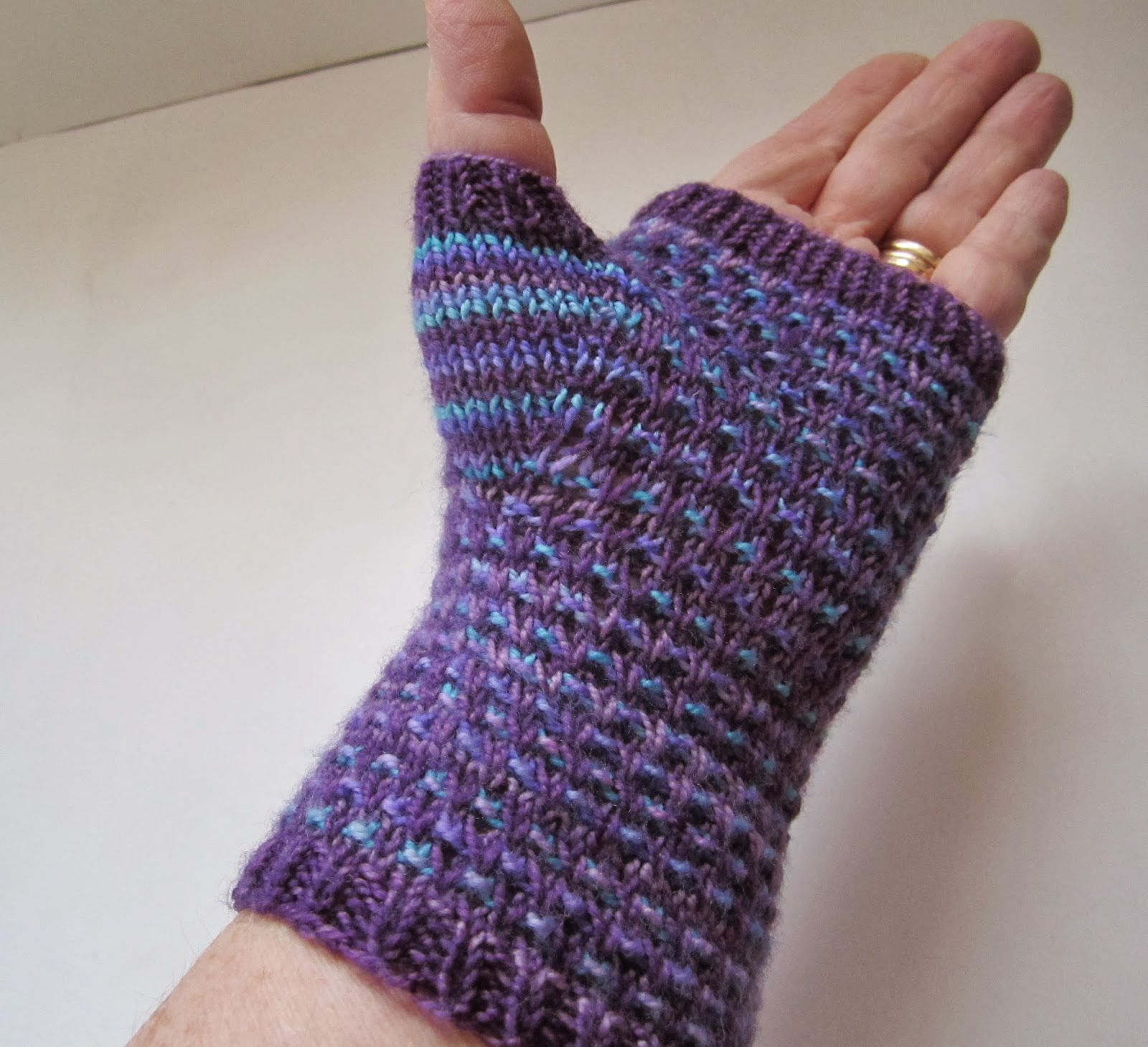 The mitts are called Fleckle Mitts and were lots of fun to knit.  You only use one color at a time and they end up double stranded so they're quite warm.  I hope Eliza doesn't lose one of these, because I don't have any more yarn!  These would be good for using up bits of leftover sock yarn, as they don't take much.  It's the first time I've used 100 Ravens yarn and I really liked working with it.

I've been saving the yarn for this next pair for quite awhile trying to decide on the perfect pattern for my daughter-in-law, Emily.  She has long arms and always seems to have a gap between the end of her coat and her gloves.  She also has nice slender arms, unlike mine!  Still, you get the idea!  The yarn is Marigoldjen's merino and nylon in the colorway Anole. 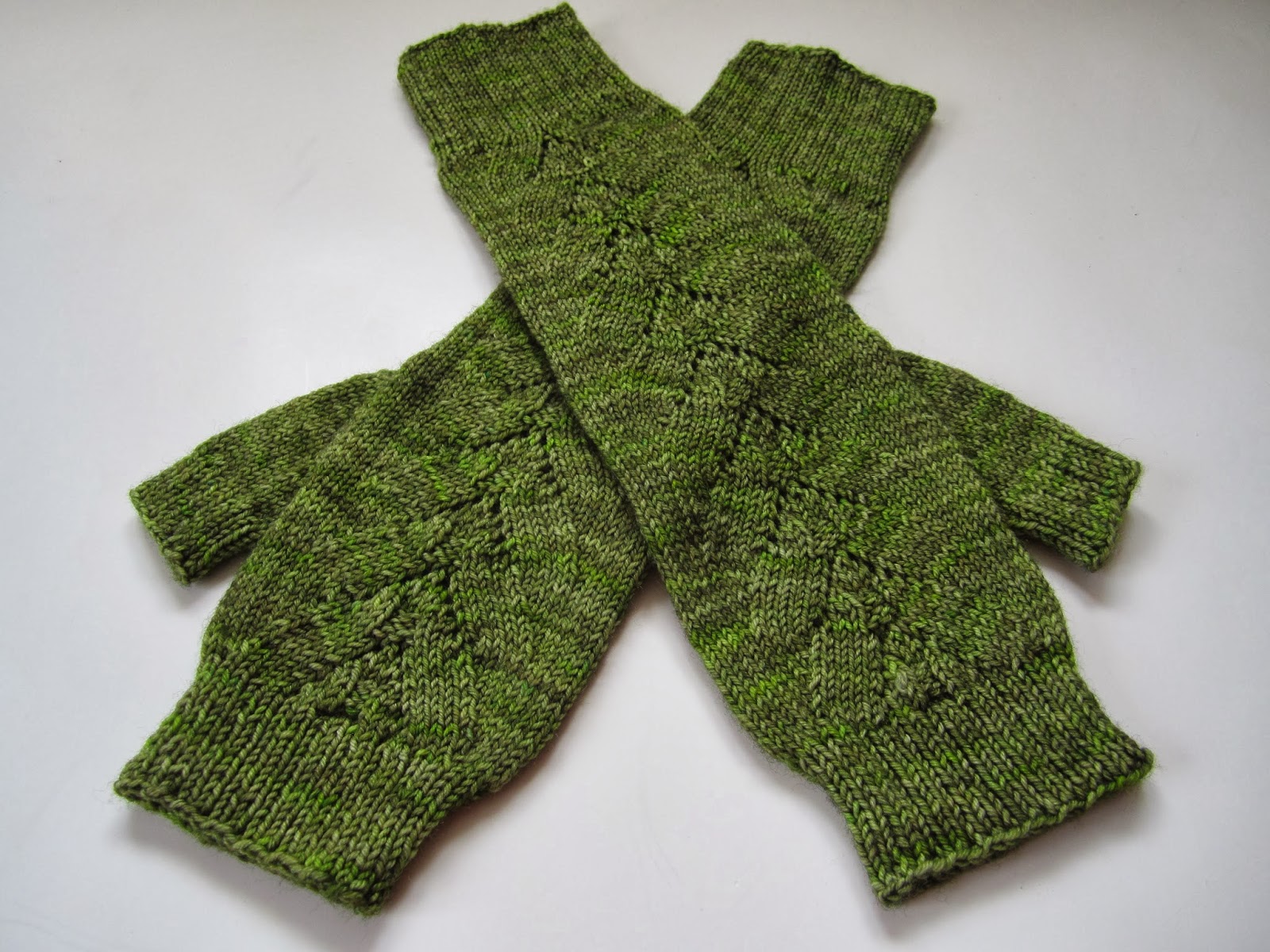 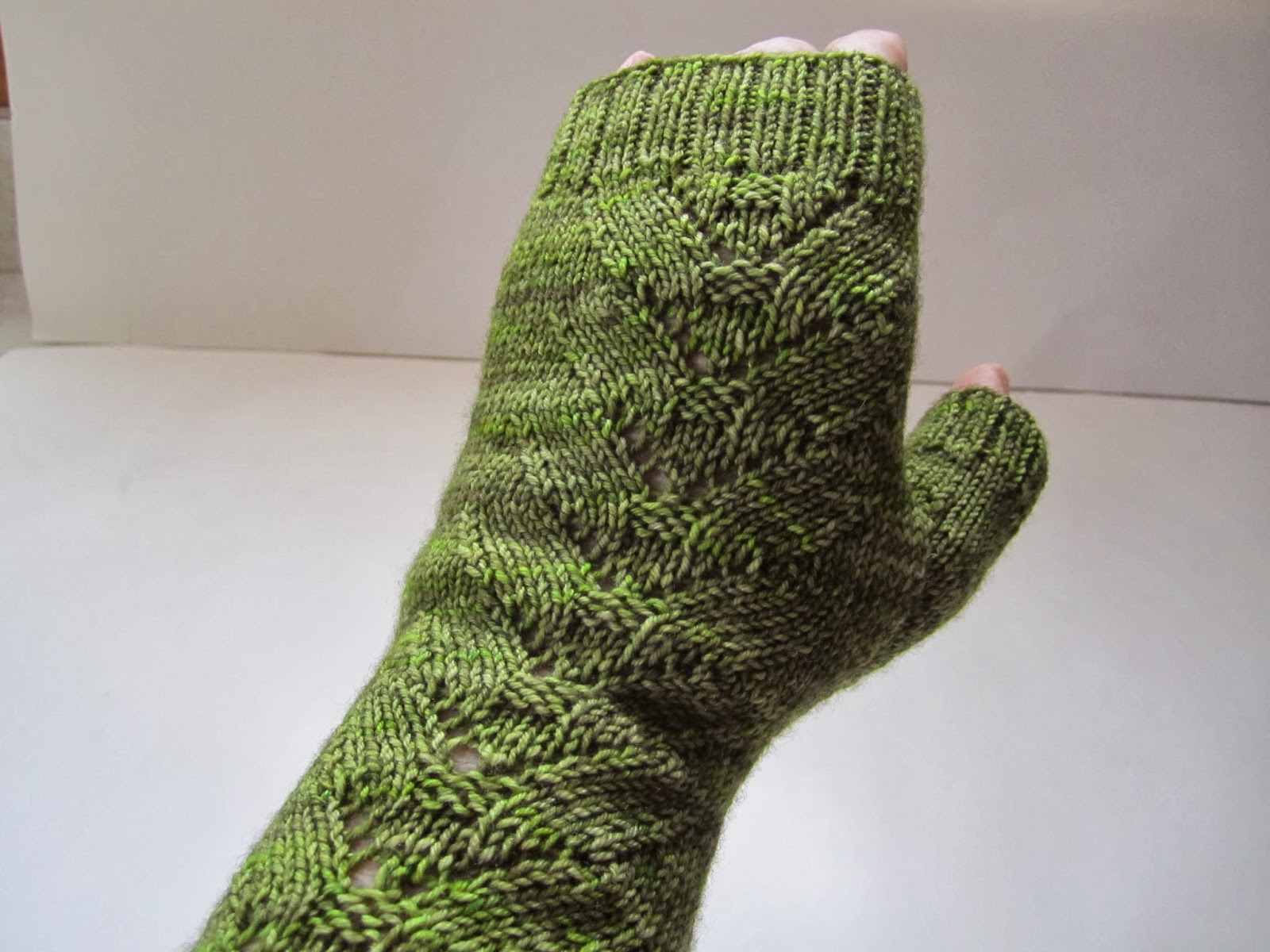 The pattern is Herbaceous Mitts and I just loved knitting them.  Generally, I don't enjoy knitting lace projects, but these were an exception.  I found the pattern easy to follow and memorize. In fact, I like them so much, that I knit a second pair for my sister, Evelyn. 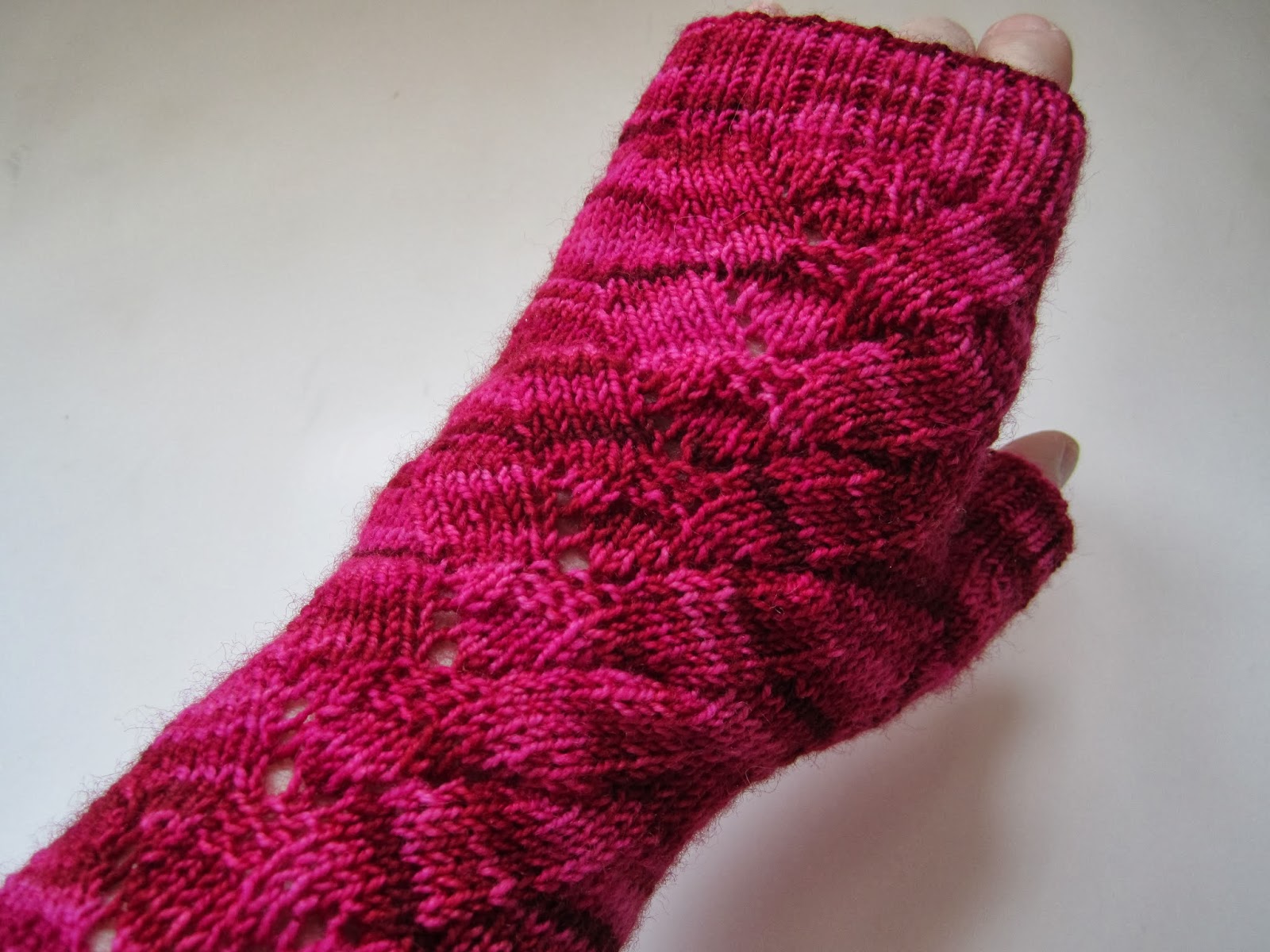 I used Koigu for her pair and I didn't make them as long.  I think a pair of socks knit out of this pattern would be terrific!

I also knit some hats for the guys.  These were all my own patterns.  Matt's is knit out of Malabrigo Arroyo. 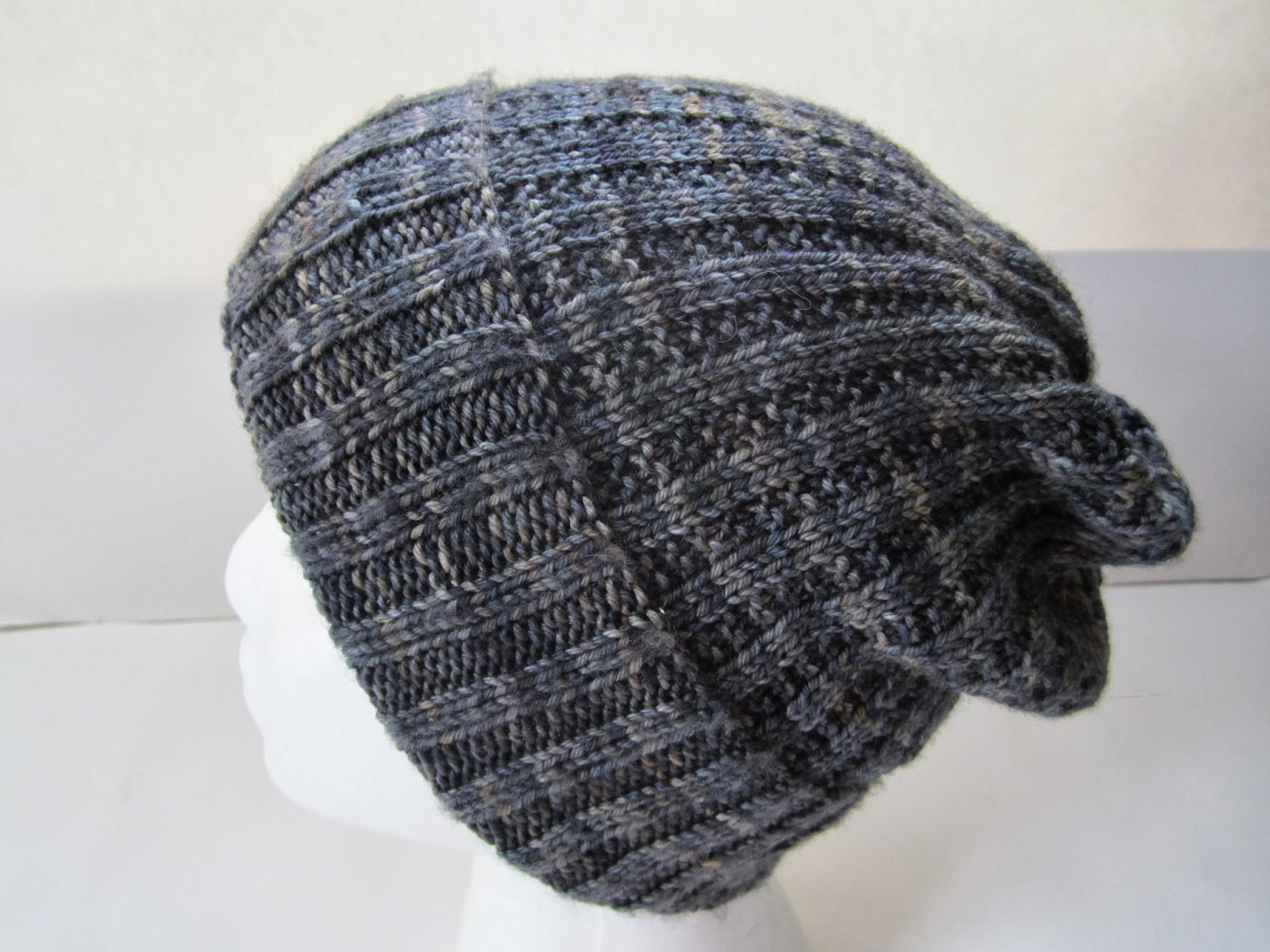 He can wear it with the brim doubled or as a slouch.  His office is in the basement of his house, so I made it lighter so he could wear it if it got cold inside!

Michael didn't want anything fancy.  He just wanted warm!  I used Malabrigo for both of his.  The blue is Buscando Azul. 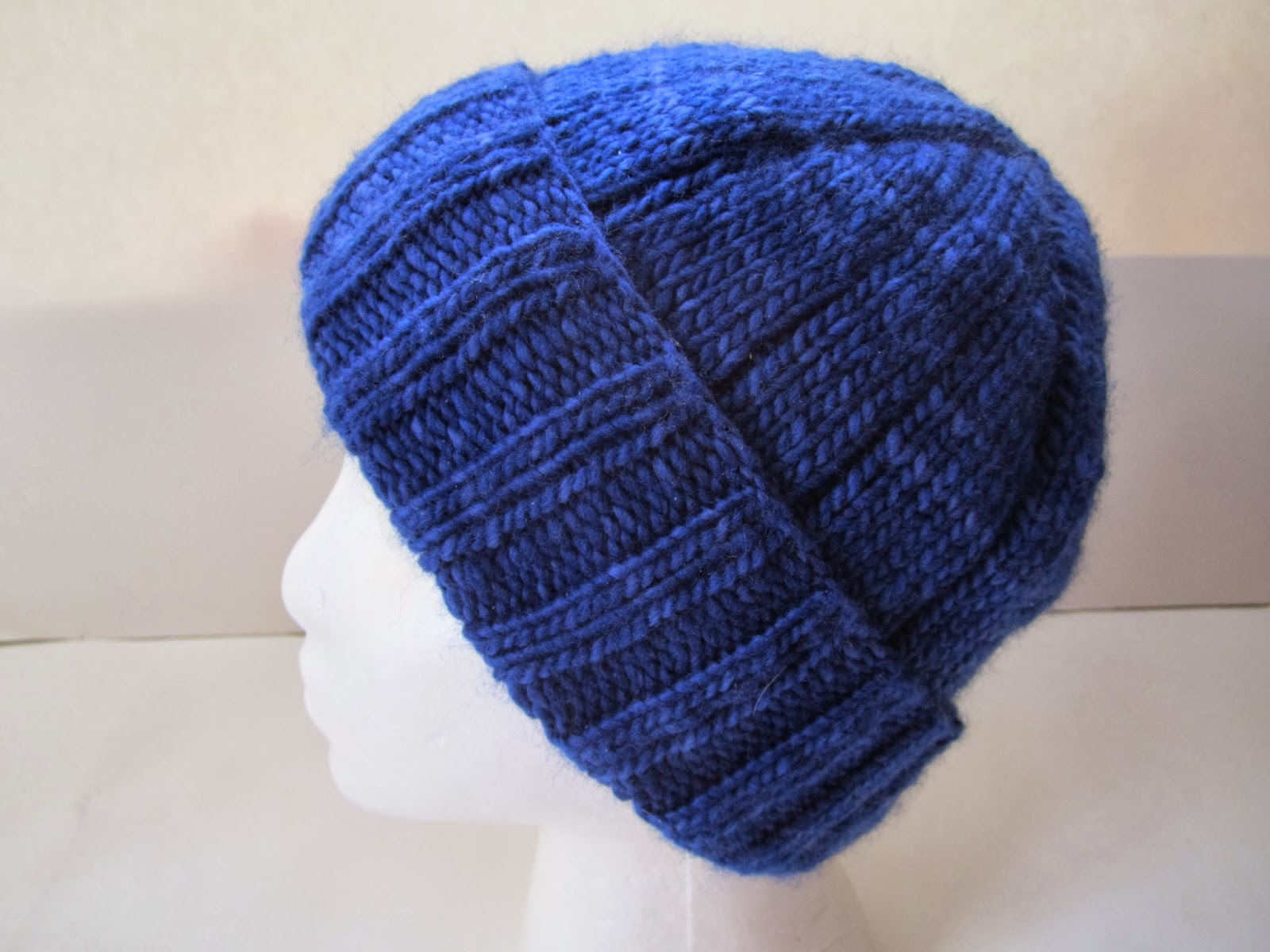 And the green is Vaa. 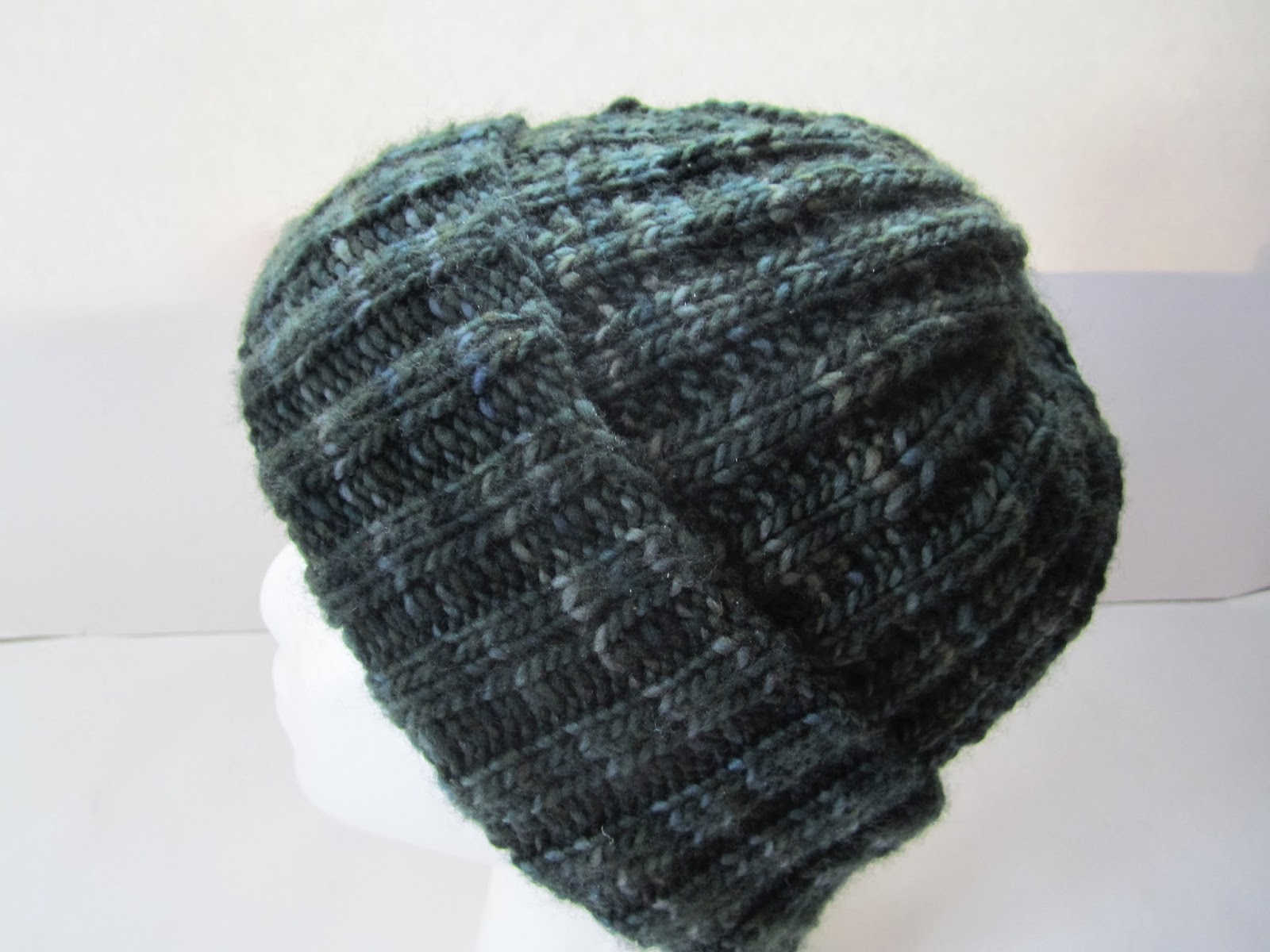 My "across the street" neighbors had a beautiful, baby girl in December too.  I knit Abby a Puerperium Cardigan.  I admit that I did get a head start on this set and was waiting to see what buttons needed to be sewn on.  John Deere tractors or flowers.  I was so sure it was going to be a boy, but Abby surprised us all. 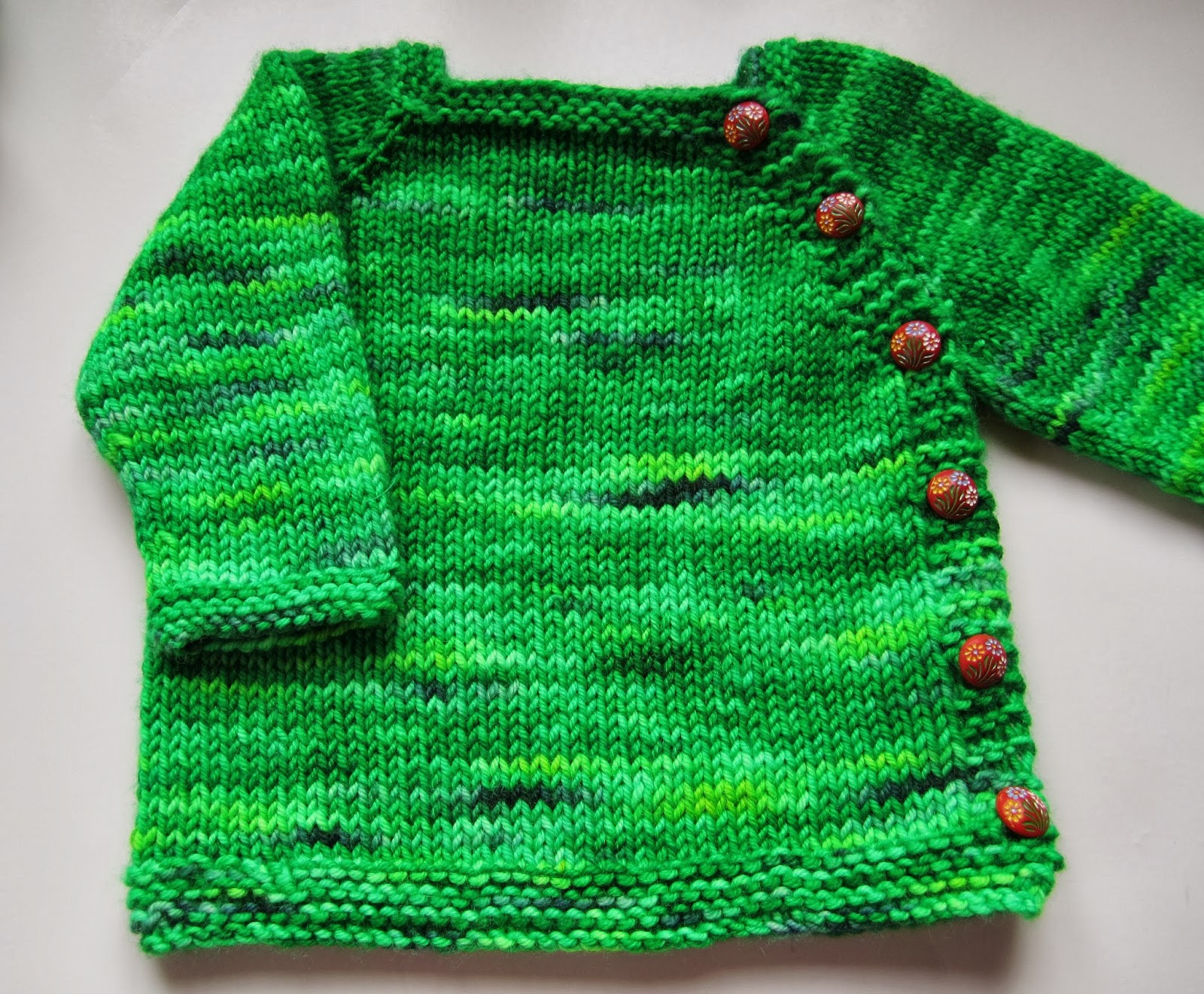 Jen, of the same Marigoldjen yarns, dyed this especially for me.  I wanted a true, kelly green and I love the way it came out.  It's dk in merino, cashmere and nylon. 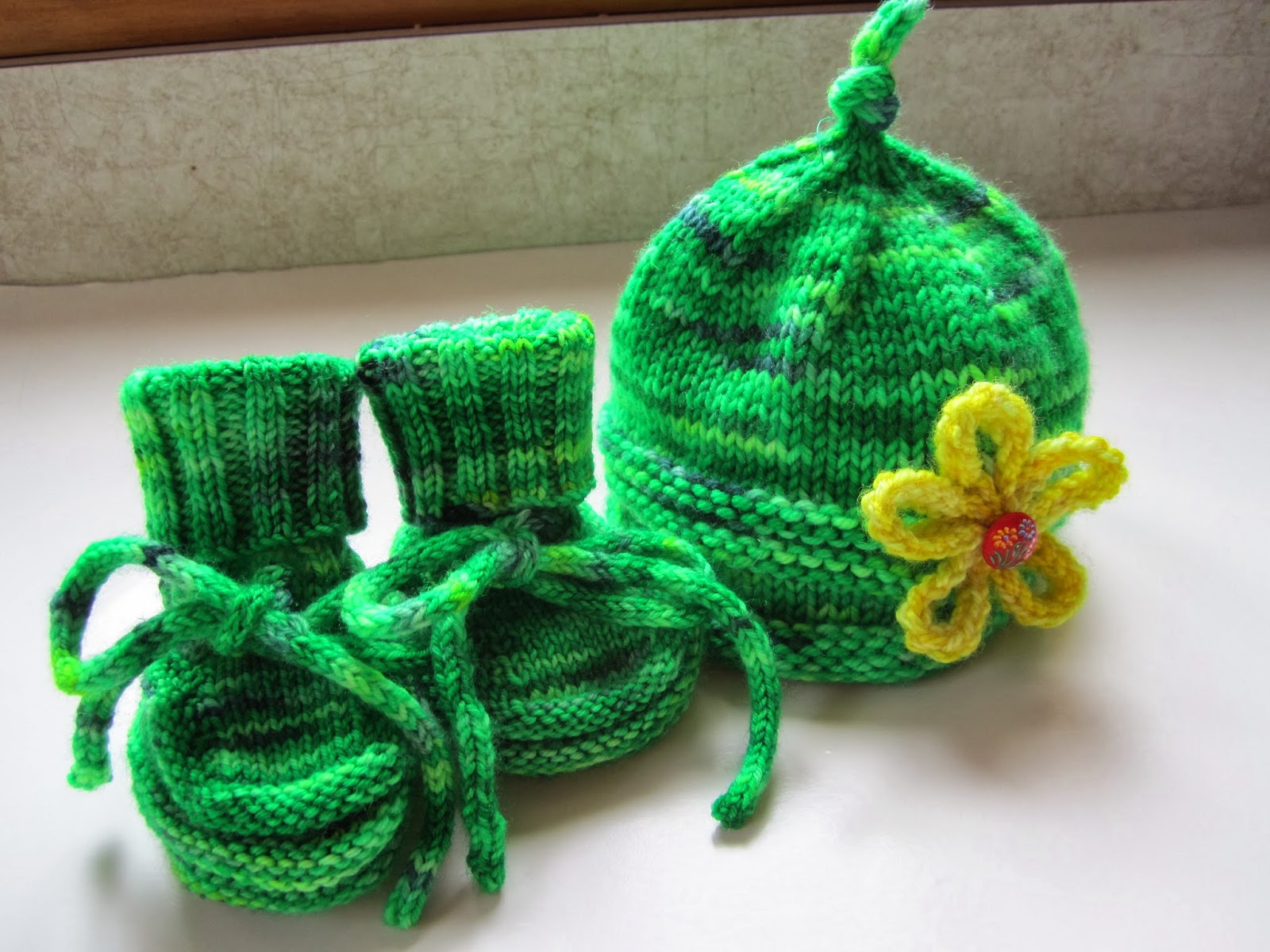 The booties are my favorite free pattern. Christines-stay-on-baby-booties only this time, instead of doing rings of knits and purls, I did a rib cuff that can be pulled up to keep those little legs warm.  The hat is my own simple beanie pattern.

If all this wasn't enough, my other sister, Jeanne, asked if I would knit her a shawl to wear to her husband's Christmas party.  (Well, technically, I don't think she actually asked, it was more that I offered!)  She loves blue so I used this wool and bamboo yarn from Keepinknitreal on Etsy in the colorway "You're All I Need to Get By". 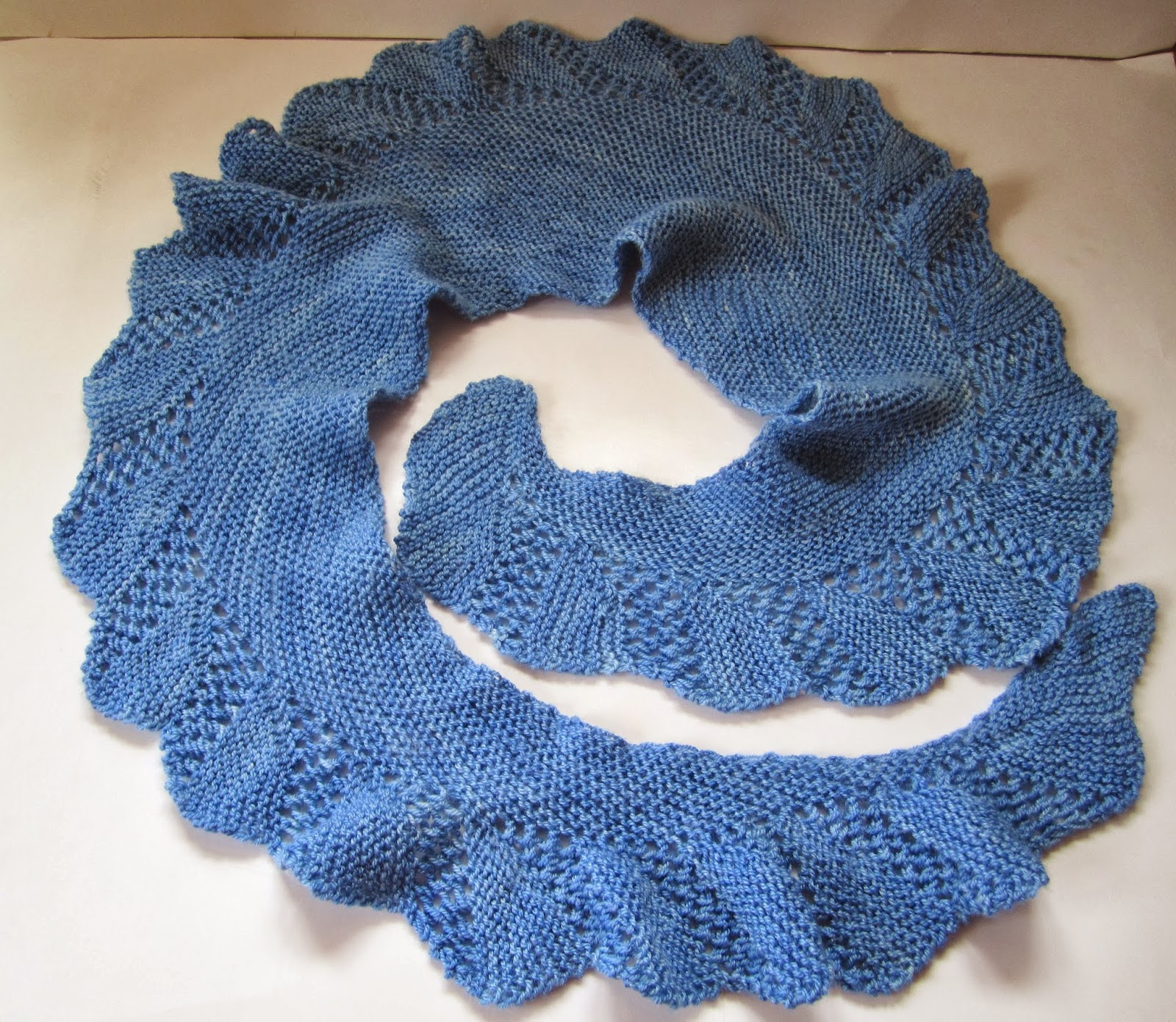 The pattern is Ripples.  I saw this shawl knitted at the Fiber Festival and couldn't get over how pretty is was. When I started knitting it, I thought I have to be out of my mind, trying to get it done with everything else I had to do, but it went pretty fast.  It's very easy to memorize and I could even watch television and keep my place!  Eventually, I want to knit one for myself.

Are you tired of reading this post yet?  I only have a couple of others left!  I couldn't forget the grand kids, except in this case, Jack was the only one who received an actual present.  I knit him some Harry Potter socks. 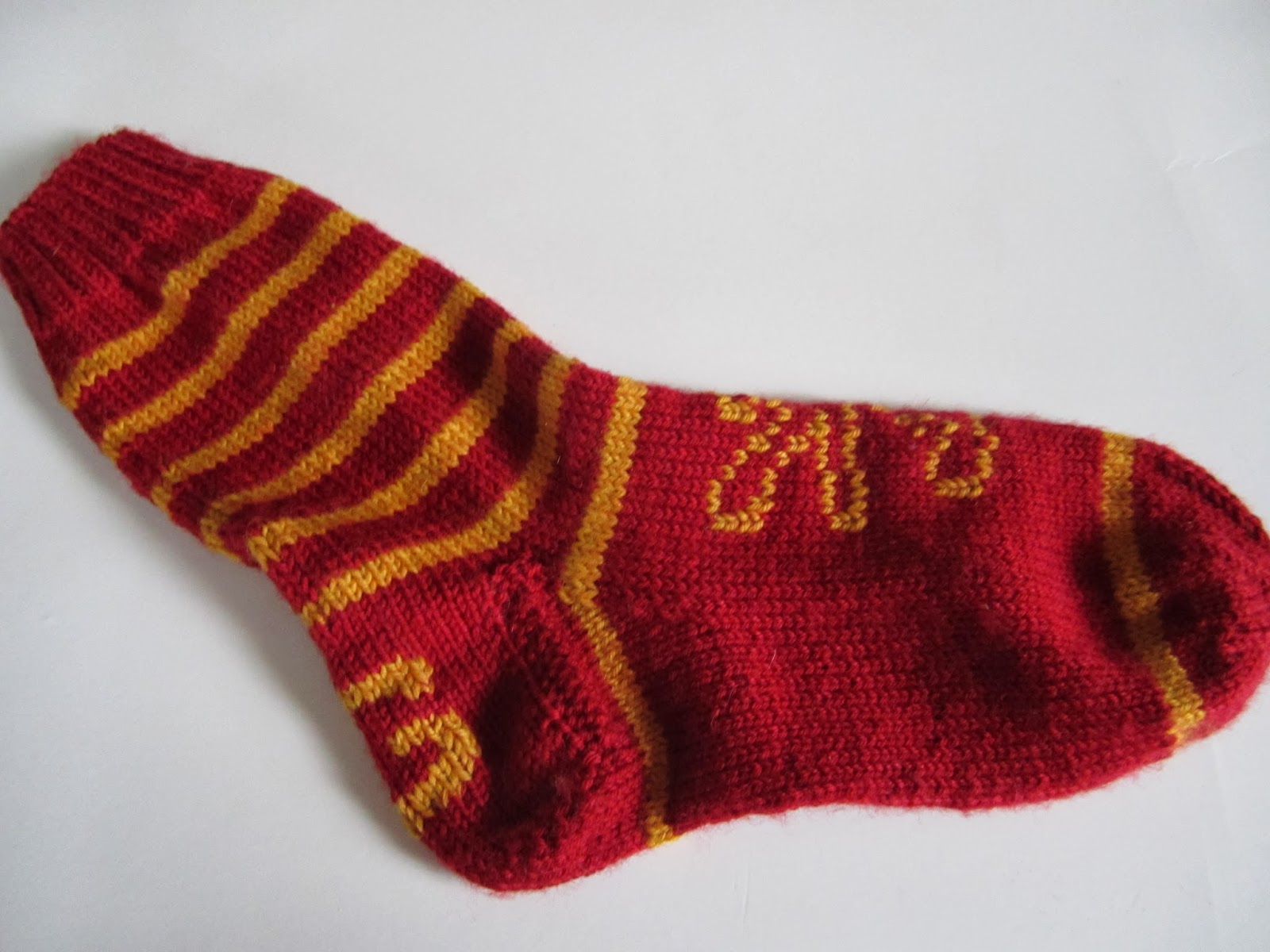 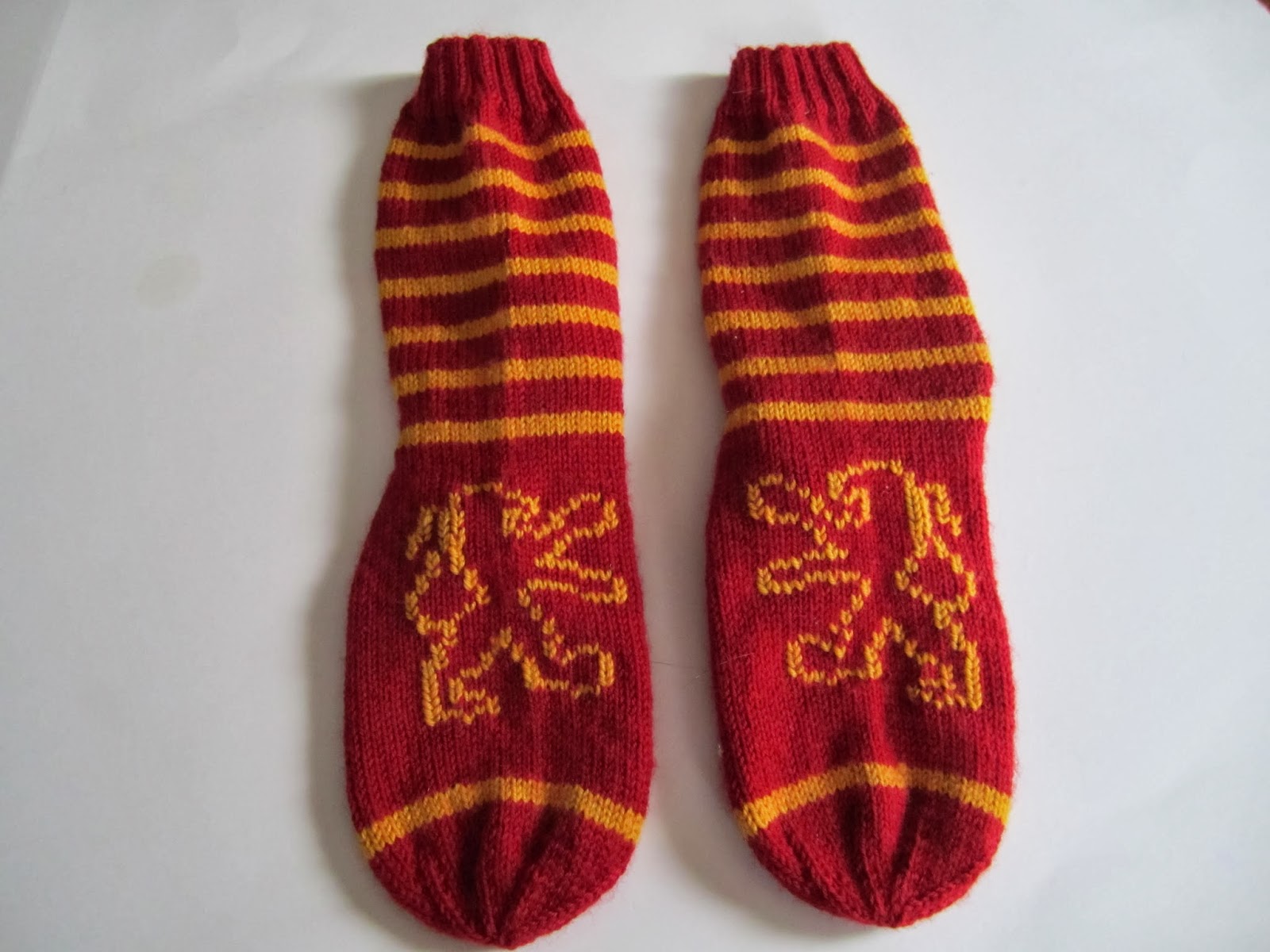 They were another free pattern on Ravelry called Go Gryffindor.  The griffins are duplicate stitched and I made a mistake on the first sock so when I got to the second one, I made the same mistake so they'd match. There are free patterns for the other three houses and I was afraid that Jack would ask for all of them, but he said he was just happy with these.  What a great kid!

I also knit a couple of pairs of mitts for Ruthie.  I did a little experimenting to see which thumb I liked better, the one with the gusset or the other.  The verdict is still out, but they're so small, neither take much time to knit. 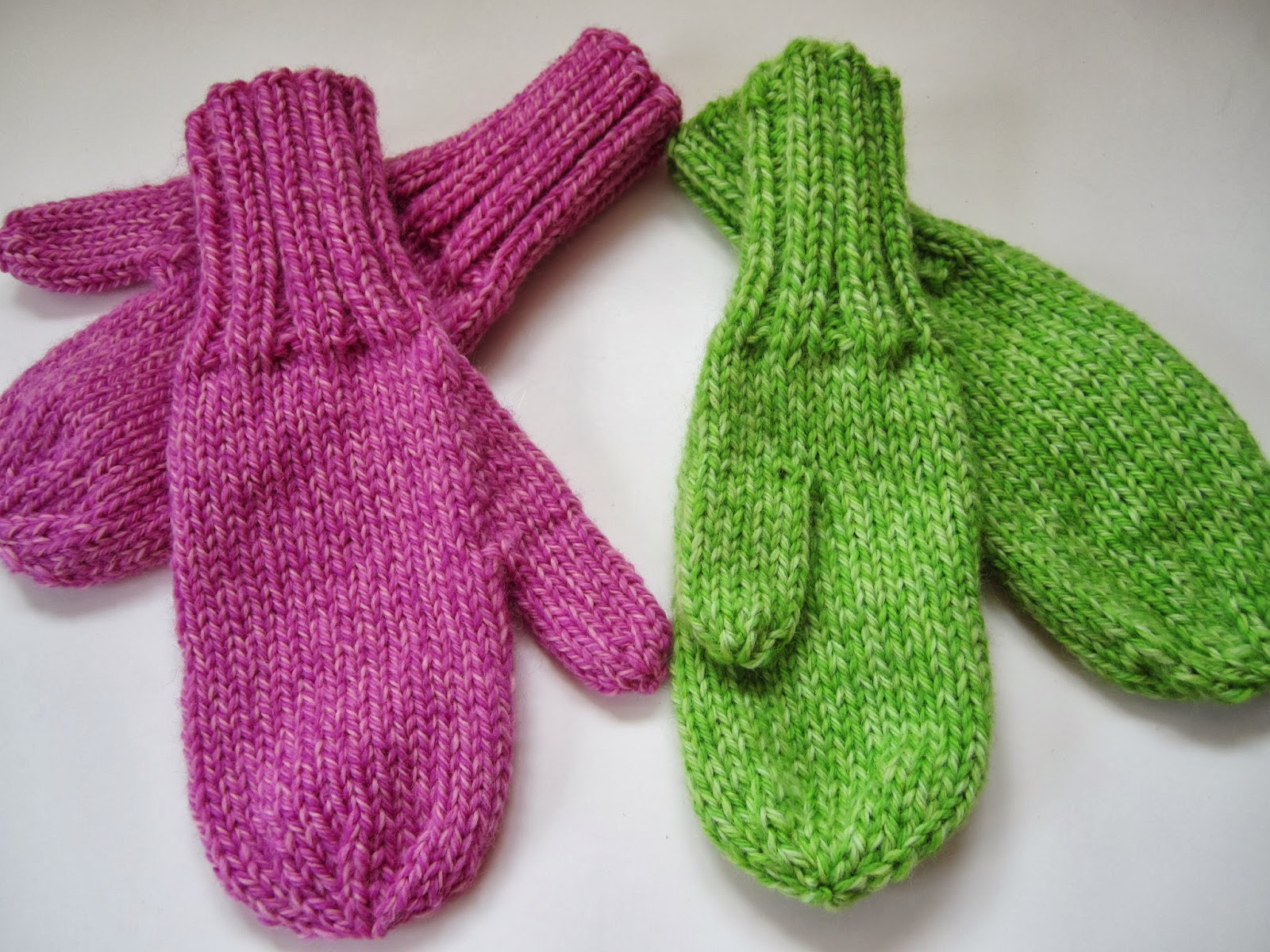 Oh wait, I almost forgot!  I also knit some more hats for our hospital!  These are the red ones: 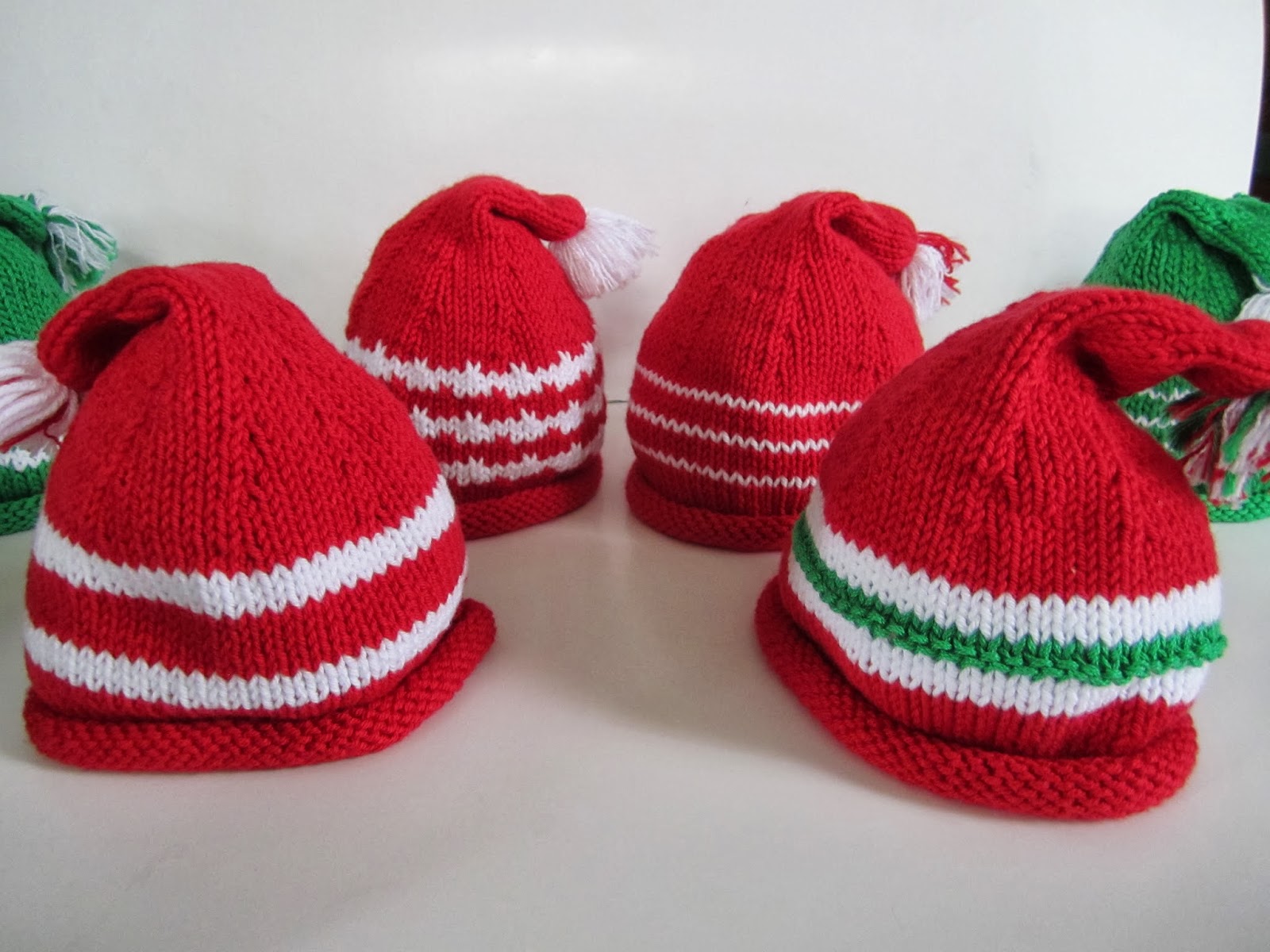 and these are the green! 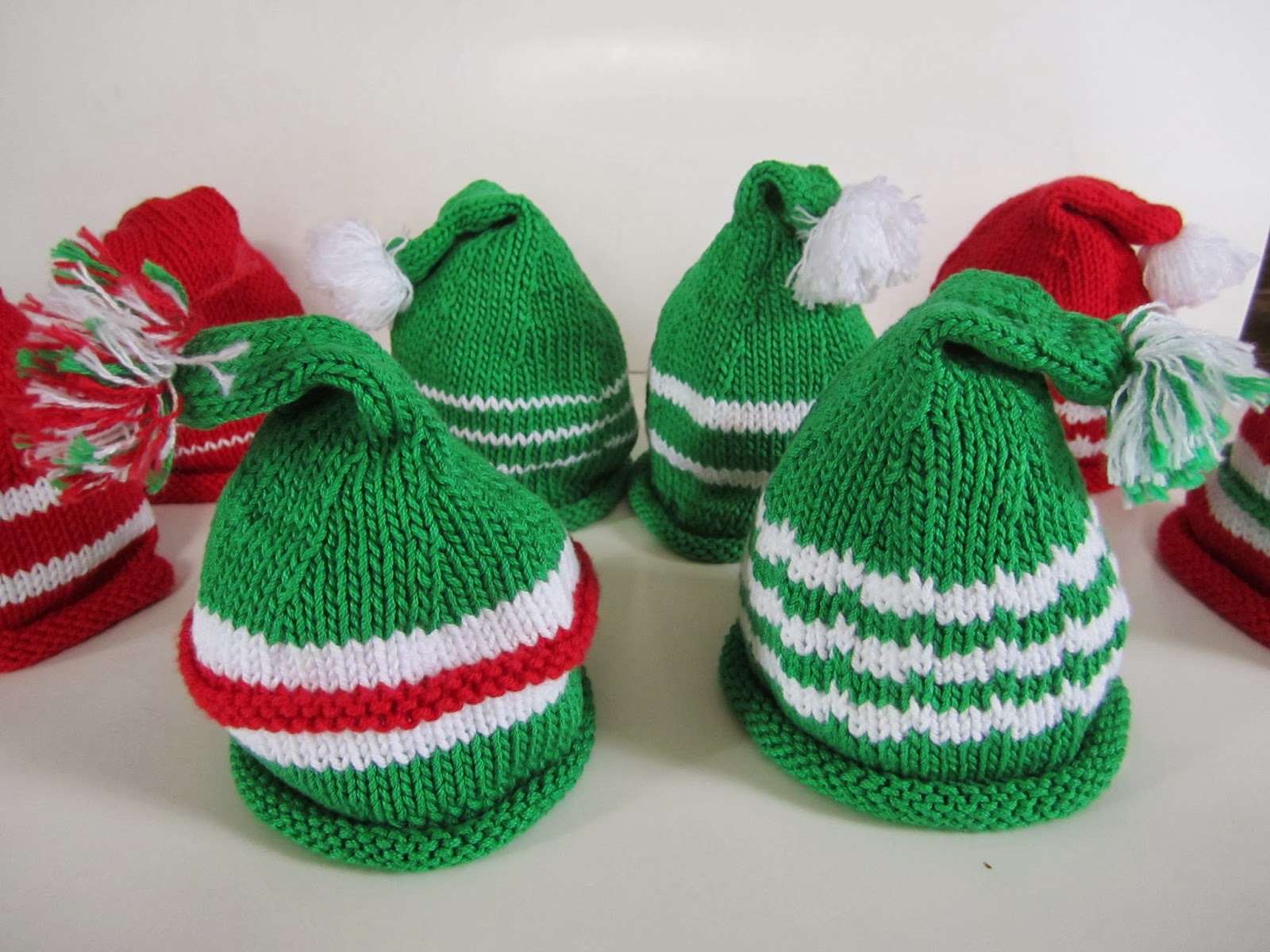 I wrote my own pattern as I just wanted little stocking caps.

(I haven't forgotten that a couple of you asked me for the patterns for the football hat and the berry hat.  I'll get to those soon.  I have to reknit both of them so I can take pictures along the way!)

So that's what I've been up to last month (including the Merry Christmoose pattern that I posted!) and I do have two other Christmas gifts that I haven't given to the recipient yet.  Those didn't get finished in time.  Gee, I wonder why not?!!

Wow, you have been busy!

Those are some great looking hats! You should post the patterns!

Such beautiful knitting. The recipients were darned lucky to receive these gifts.