I can't believe how long it's been since I last posted anything.  We've had a nice enjoyable summer, despite the tornado, earthquake, hurricane and flooding!  Who said living in the Northeast was dull?

Now, are you ready for my news?  Well, you all know (or should know) that we have a brand new baby arriving in late January.  What you don't know is that it's a GIRL!!  I could hardly believe it when I heard the news.  I think I must have asked at least a dozen times if they were sure.  After three beautiful grandsons, I fully expected another.  I think I'm still in shock, but I'm also absolutely thrilled!  I was secretly hoping for a little girl, but I refused to admit it to anyone, for fear of jinxing it.  Every time I went yarn shopping, I purposely steered clear of anything that could be considered "girly".  In fact, I even started knitting some soakers that were (in my mind) neutral.

Here's one that I just finished: 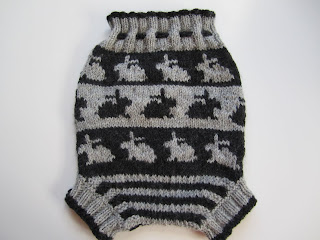 See, doesn't that look perfectly neutral?  I didn't have a pattern as I've knit so many soakers over the years, I just kind of made it up as I went.  The rabbits are from a free chart from Sandra Jager on Ravelry here.  She has lots of wonderful fair isle patterns and some of them are free.  The yarn is Cascade 220 sport, which is a little light for a soaker.  You need the thicker wool to absorb the moisture.  However, this is all stranded so the yarn is actually doubled.  This was all fine until I realized that I would need to do something for the crotch.  This is where you need the thickness the most.  I finally resolved that problem by using a slipped stitch similar to the heel on a sock.  On the backside rows I purled one stitch and slipped the next.  On the right side rows, I just knit.  It worked out really well.  I think it did anyway.  The real test will come when it's put into use! 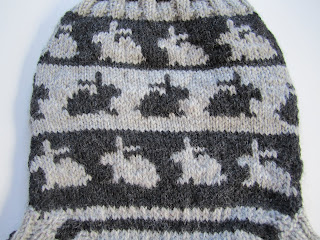 I added a couple of short rows for extra room at the base of the bunnies.  Now, I guess I'll need to find a feminine little shirt to go with it.  Somehow, I think my rusty embroidery skills will be put into use!

In other news, I completely rewrote the Penguin bib pattern. 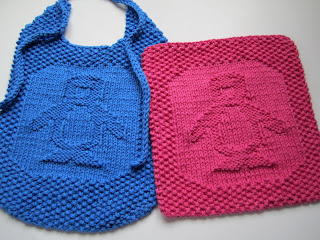 ﻿
﻿This was one of the "original" patterns that started it all.  It was badly in need of attention.  My pattern writing skills were not good!  I changed the top of the bib slightly and I've included a chart with both the bib and the cloth pattern.  The revised patterns are in the sidebar under the updated patterns.
Hope you all had a nice, relaxing summer!  Don't be surprised if from now on my patterns start to lean more toward girls!  It's new territory for me, but I'm thoroughly looking forward to the journey!
Posted by Elaine at 12:54 PM

Yay! I think the penguin was my first Cloverlaine bib too! I might have to do another one, just to try the new pattern!

Nice to meet you! I just found your blog. I have a one year old granddaughter and we still need bibs. Yours are adorable! I look forward to looking back through your old posts.

I love your bibs and more girly would be great as I've finally had our first girl!

I LOVE your PENGUIN BIBS!!! I followed a link over to tell you! :-)