I've been ever so slightly consumed with baby knitting and so I forgot I had two pair of socks already started.  I always like to have a pair in progress to take with me for appointments or for car trips, but these were both languishing a little too long.  Part of the problem might have been that the boys don't wear socks very often in the summer, so they weren't asking for any.  In any event, I decided to just finish them up and move on.  Mickey was visiting last week and was good enough to model for me.

The first pair are called "Fair Winds" another great sock pattern from Sara Franklin.  This is the second pair I've knitted from her book called "Sea Dreams". 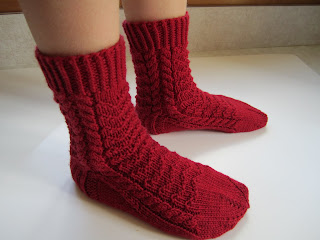 Sarah's patterns are very well written and I just enjoying knitting them.  They're not particularly difficult and there's enough going on to keep you interested.  (Never mind that I just said these were just lying around!) 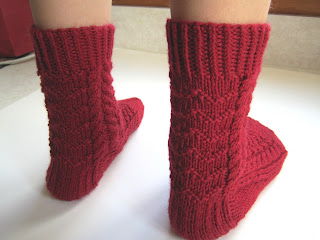 I like the way the cables run up the sides.  I think I might have liked them even better if I had paid closer attention to the pattern.  Apparently, I reversed the direction they were supposed to be twisting and so I ended up doing the complete opposite. 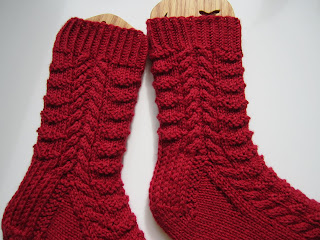 I didn't realize it until I picked up the second sock and started paying attention!  Since I wasn't about to rip out a sock and a half, I just kept them going in the same direction.  I still think they look really cool.  I knit a round toe also.  Sarah has another new sock pattern called "Gentle Breezes" that I have my eye on.  I suppose it's only a matter of time before I break down and add that one to my "collection" as well.
The second pair of socks were from an old sock calendar that I bought ages ago.  I noticed that the pattern is still available in a pdf format on Ravelry, although the price is significantly higher than I paid for the original book. 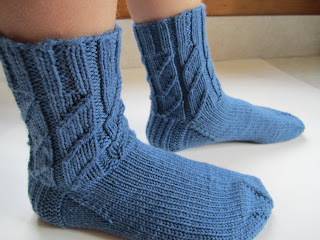 ﻿
The pattern is called "Everybody Wants Sox" and you can check it out here. This is an easy pattern to memorize and I like the way they came out.  I did modify it a bit by making the twisted blocks slightly smaller to fit the number of stitches I was working with. 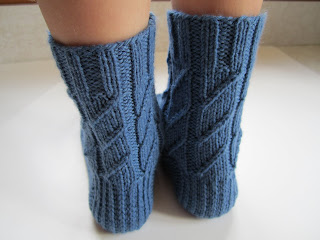 I used Cascade Heritage 150 for both pairs.  WEBS had a wonderful sale on it this past Spring and I couldn't resist.  The yarn is slightly thicker than the regular Heritage so they should make nice warm socks.

I was hoping that maybe I could now go back to other knitting, but when Marty spotted Mickey modeling these, he wanted to know if I would make him a green pair.  Actually, I think his exact words were:  "You are going to knit me a pair of green ones, right Grandma?"

Lovely socks! I read the blog interview that designer did of you just last night. How cool is that!!! Her patterns are very nice looking.

BG showed up at my house yesterday with some store-bought socks on. He immediately took them off and when asked why....he told me, "I want the comfy socks that you made, Granma!" My heart melts a little more every day!