I'm been on a mitten kick lately.  I will confess that mittens are my most favorite things to knit.  Especially little ones!  I had this idea pop into my head for a pair of owl mittens.  As I've told you before, my oldest grandson is really into birds and I thought these might be fun to make. 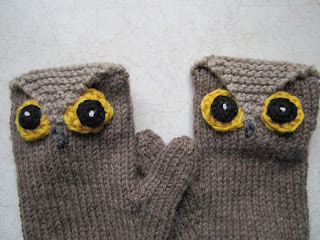 They were pretty easy, although there is some sewing involved and a little crocheting (not my strong suit!).  You can take any mitten pattern that you like and convert them into owls.  Here's how you do it!  Knit your mitten until the length reaches a little past the top of the fingers.  You do not decrease as you normally would do.  To finish the top of the mitten, you will divide your stitches evenly.  For the first mitten, knit across the first half of your stitches.  When you get to the second half, knit into the front and back of each stitch, so you have twice as many stitches.  Here's a picture that shows the first half on the front needle and the second half, with twice as many stitches on the back needle: 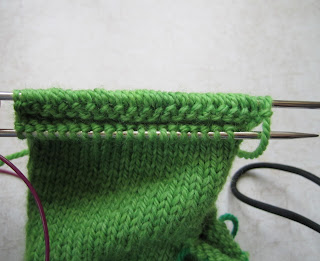 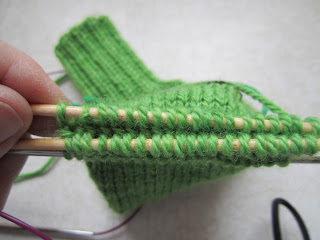 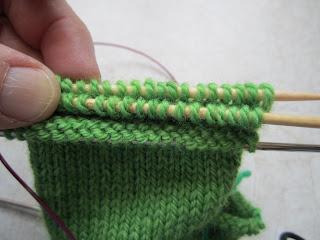 At this point, I suggest that you move the top stitches to a piece of waste yarn.  Now, you graft the stitches from the middle and the front needles together, using the kitchener stitch.  After the stitches have been grafted, go back and pick up the stitches you placed on the waste yarn.  You will now knit the piece of the forehead that comes down between the eyes.  Carefully join your yarn and knit across the stitches.  Knit three more rows.  The front of the mitten should now be facing you.  Begin the decreases.  Slip the first stitch as if to knit, knit the second stitch and then pass the first stitch over the one you just knit.  (ssk or psso).  Knit until the last two stitches and then knit these together.  (k2tog).  Knit the next row.  Second decrease:  ssk, ssk, then knit until you have 4 stitches remaining.  k2tog twice.  You've just decreased 2 stitches at the beginning and at the end of the row.  Knit the next row.  Third and subsequent decreases:  ssk, knit until last 2 stitches, k2tog.  Next row:  knit.  Repeat these last two rows until you have 2 stitches remaining.  K2tog and cut your yarn leaving a long tail for sewing the point down. 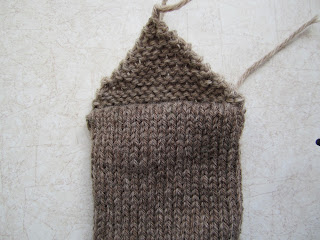 Next come the eyes.  I crocheted two circles.  You don't want your eyes to be huge (or maybe you do!), so you might have to play around to get them the size you want.  Crocheting is not "my thing", so if you have an easier way to do this, go for it.  Next, you need to crochet two smaller circles for the inside of the eyes. 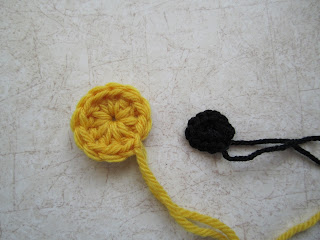 ﻿Sew the black circle on top of the yellow circle to make the eyes.  I added a little white french knot for the pupil.  Now sew the eyes onto the mitten.  I suggest the you bring the eyebrow flap down to make sure you have them where you want them.  To sew them, I just used the tail from the yellow circle and did a running stitch around the perimeter. 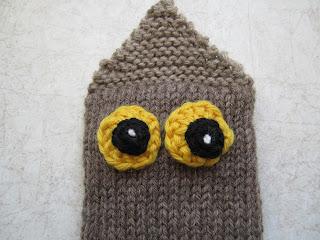 Now thread your needle through the long tail of the eyebrow flap and tack it down.  You don't have to sew it down completely, just put a few stitches along each side to anchor it.  Also, if you roll up the cuff, it makes it easier to sew! 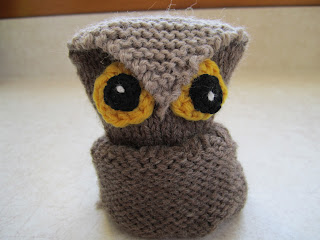 I embroidered a beak after the flap was sewn down.  It doesn't show up as nicely as I'd like it to in these pictures, but it is there!  Now, instant owls!  You just need to go ahead and finish up the thumbs according to your pattern. 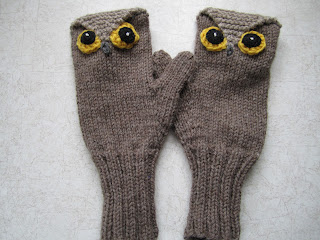 Remember, when you do the second owl, you'll need to reverse the graft, so you'll have right and left mitts. 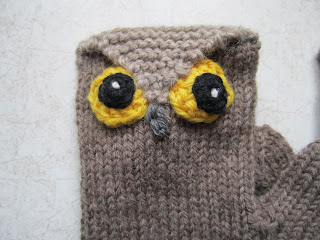 I used Cascade 220 and a U.S. Size 4 for my mittens.  Try to use wool so those little fingers will stay toasty.  The cold just goes right through acrylic!﻿
Copyright 2011 by Elaine Fitzpatrick.  No part of these instructions or pictures may be used or reproduced except for your own personal use.  Items made with these instructions are for your own personal use and are not to be sold unless you have express permission from the designer.
Posted by Elaine at 4:33 PM

The mittens are so cute.

oh these are a real hoot! I love them!

I love owls!! These are SO CUTE!

Uber-cute! Totally have to make those for my little owlet *hoot**hoot*:-D!

Wow - you make so many really beautiful things!!! :) I'm impressed!