Well, it sounds like the KAL might be a good idea. Thanks for all the nice comments that everyone has sent to me, both here and on Ravelry. I appreciate them all! I've decided that I'm going to split the KAL into two, one for the bib and one for the cloth. It will be the same design, but just two different projects. Each day I'll post the rows for the bib and the dishcloth separately, just so you (or I) won't get confused! I'm hoping that you'll enjoy it. I'm just waiting to hear if the bib passes the test knit and then we'll be good to go! Did you pick out a color yet? I stitched my bib in Peaches 'n Creme Lt. Blue and the cloth in Lt. Grape and I liked them both.

While you're waiting, I thought I would share the rest of the hats I knit for Christmas. First up, for my beautiful daughter-in-law, I made "London". This is a free pattern on Ravelry. She wanted something slouchy that would cover her hair. Well, she didn't actually ask for it, I just kind of knew that's what she had in mind! (Notice that I now have a stryrofoam head, no more blown up balloons! My sister had it rolling around in her closet and it's kind of banged up, but works great!) 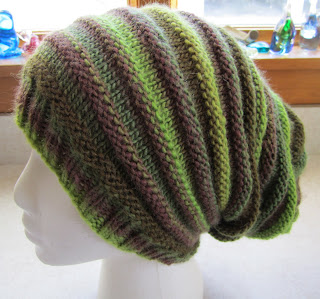 This is a neat pattern and was surprisingly quick to knit. First, you knit a circle for the top (or bottom) of the hat and then you pick up stitches around the perimeter and knit down to the brim. If you don't belong to Ravelry, you can still find this pattern on the Internet. Just google the designer, Tina Laiho, and scroll down to where the pdf is posted. I would copy and paste the link, but for some reason, this new computer won't let me copy and paste links to the blog. I think there's a setting that's off, but I'm waiting for my tech son to straighten it out. Anyway, I used Crystal Palace's Mochi Plus. If you've ever knit with this yarn, you'll know that it's a royal pain to try and match up the color. Ordinarily, I like mismatched, but not when there's a definite color sequence. I was afraid that I wouldn't have enough yarn, but by some miracle, every color change matched perfectly. I couldn't believe it! I used two and one-third balls, because I wanted to make sure it was long enough.

Next, I knit a simple hat for my son. As soon as I saw this pattern, I knew I wanted it. I love the neat design and it was also easy to knit. 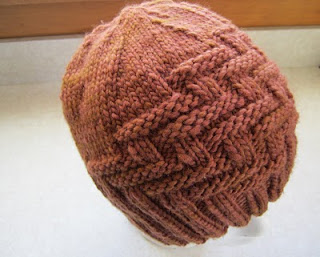 The pattern is called "Berruti" and is for sale for $1.99 at Knitpicks as one of their independent designer patterns. I used yummy Malabrigo in Rich Chocolate. (Doesn't that sound good?!)
I saved the best for last. This wasn't a Christmas present, but when I noticed that my oldest grandson, Jack, was trying on his brother's sheep hat, I felt bad that I hadn't knit him a special hat too. I asked him if he'd like a hat and, if so, what would he like. I wasn't prepared for his answer though. He wanted a house finch! A house finch, really? I didn't even know what a house finch looked like! Still, being the good grandma that I am, or try to be, I did my research and voila, here's his hat: 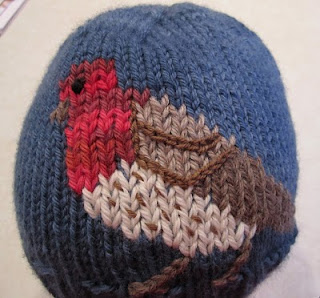 Jack is only seven, but he's obsessed with birds. He reads every book on birds he can get his hands on, and not kids books either. He goes right to the adult section. He knows more about birds than anyone I know. He even studies their songs and can tell you the difference. (My husband remarked one day that the wood duck sounded like a seagull, and Jack did an imitation of a seagull, just so we could hear the difference between them.)
In any event, I knew I'd have to be fairly accurate to please Jack and he was delighted. He had told me that he wanted a round hat, not one with points, like his brother's sheep hat. I used the "rib-a-roni" hat pattern on Ravelry, but you can also find it here. Just look in her sidebar for the free download. Obviously, I didn't do any of the ribbing that the pattern calls for, but it still came out great. After I knit the hat, I just duplicate stitched the finch and did a little embroidery here and there. I'm happy to report that he wore the hat all day inside the house.
I hadn't made matching mittens as I just figured there would be no way to do a bird on them, so I knit him a plain pair. I know, I know, what was I thinking!! He was so disappointed that they were plain. So, back to the drawing board. I decided it was easier to just knit him another pair, rather try to embroider after the mitten is closed. If you do the duplicate stitch before you start the decreases and add the thumb, you can stick your fingers inside and it's much easier! Jack hasn't seen them yet, but I'm thinking he's going to love them. 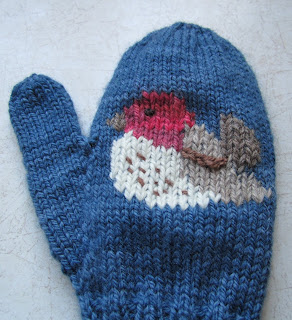 I used Lorna's Laces Greenline Worsted for the hat and DK for the mittens in denim blue. I knit the mittens on a 2.75mm needle and I love how nice and firm they knitted up. They seem like they'll not only be soft, but nice and toasty too. 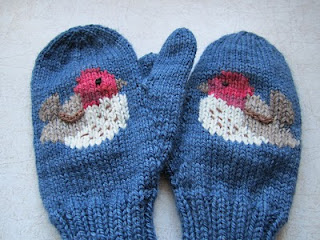 Let's just hope he doesn't lose one in a snowbank!
Posted by Elaine at 2:20 PM

Yep, you must be high on the Wonderful Grandma List - ALL the hats and mittens are fantastic

Your knitting is fabulous!! There's so much depth and design to each thing! The mittens are great.

Lucky Jack! Those mittens are BEAUTIFUL!