Where ARE you Mom?

So that's the email I received from my son the other day. Apparently, he actually reads my blog! Who knew? Anyway, he was concerned that I haven't posted in awhile. I told him I was just lazy, but the truth is that I've been working on some new designs and you all know how much I like to keep them secret. I can't (or won't) talk about them, so that just leaves more sock knitting. The weather has been so gloomy and rainy here in Massachusetts that I can't even take a decent picture to show those off to you either. That leaves just one thing I can talk about. A pattern for a hat and some matching mittens that my good friend, Alli, will be selling on her website here.

The design is based on her "Fishy Wishy" dishcloth pattern. As soon as I saw it, I immediately thought that it would make a cute hat for my youngest grandson, Marty, who loves fish. It's still a work in progress, but here's a few pictures being shown off by his brother, 5 year old Mickey, in typical boy fashion. 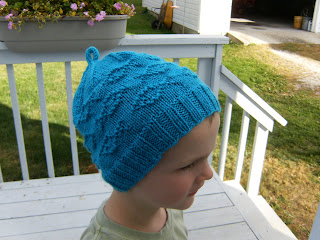 Marty may like fish, but he doesn't like wearing hats or standing still for any length of time. Mickey was reluctant to model as well, but for a different reason. He only likes RED. It took some convincing, but when I assured him that he wouldn't have to keep it, he agreed. 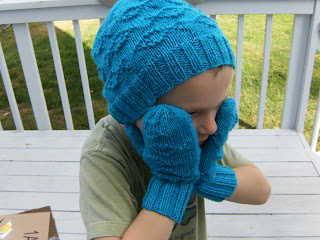 It's too bad that he doesn't like blue, because it's such a good color on him. Of course, I think ANY color looks good on him! 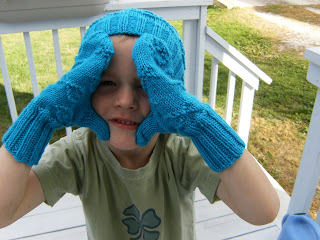 It's a lot harder to write up a pattern for mittens than it is for a dishcloth. I think that's what's taking me so long to get it finished. I know what I mean, but will you?!

I'm glad to hear that many of you have the dishcloth calendar, although I am pretty jealous. Wouldn't you think that the designers would have received the first digital copies? Apparently, we're on the bottom of the list. So much for being appreciated! Maybe next year, I'll just do my own thing, whatever that might be!

Next week I should have something brand new. It's different from anything I've done before and I quite like it. Hopefully, you will too! The rain should have moved on by then so I can even take some pictures!
Posted by Elaine at 3:27 PM

LOVE The Hat and mittens. I think I'm going to have to buy the whole set when Alli puts them up.
TOO Cute.

Johnny wants a hat with a SNAKE! There's a basic knit beanine pattern with an icord snake. I am going to try to do it for him. Have a green (supposed to be an apple) but am going to do a blue snake. Pattern has a blue hat with green snake. IF I get the Blueberry Cottonease yarn, a lady offered to sell me,I'm thinking of making the hat with the Blueberry and then use the Lime for the snake.HE could have one to take home and one for here.
HUGS
Susan