First, I want to thank all of you for the nice birthday wishes! The Baby Ripples pattern now has a pdf in the sidebar. I even think I'll be able to remember what my son taught me about uploading! Let's hope so, right? It's so much easier to just click and save, rather than having to cut and paste.

What's more fun than knitting for a new baby! In this case, I don't even know the mother, but my sister does and she asked me to make something special for a friend of hers. I'm more than happy to oblige since I like my sister and I rarely get to knit for little girls. I have so many patterns that it's actually difficult to pick out just one that I like, but I thought my sister might like this little number. 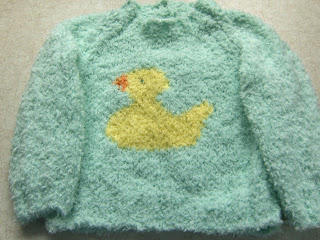 It's an old pattern from Sirdar that uses that fluffy Snowflake yarn in a DK weight. I've knit this sweater at least five times and it's always a huge hit. The yarn is kind of a pain to knit with, but the results are worth it if you want something light and airy, yet warm. As far as I know, they don't make this yarn anymore and when I heard that it was being discontinued, I stocked up. 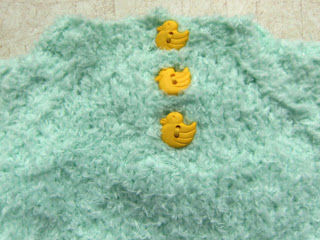 When I found the little duck buttons, I bought all of them too! You can still find them at Joann's, but I have enough to make at least five more sweaters. You can never be too prepared, you know!

This time, I wanted to make a hat to go with the sweater. There wasn't a pattern, so I just decided to make up my own. It turns out that that isn't as easy as it sounds. This yarn doesn't really lend itself to a lot of patterns. I had wanted a ruffled brim, but when I tried it, it just flopped and had no body to it at all. Then I tried a simple hat with stripes, but I wasn't too crazy about it and when I had knit enough to really study it, I decided it was way too small. I don't think it would have even fit a preemie, so I ripped again. At this point, I had figured out how large to make it, but I still wasn't happy with the stripes. I wanted to incorporate the ducks somehow, then it hit me that I could just chart my own. Duh! I do know how to chart and for once the mathematics worked out perfectly. 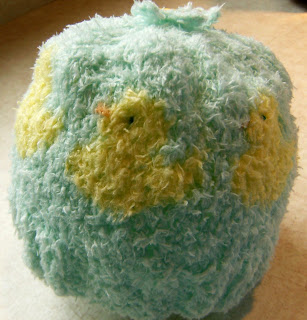 The only problem is that it's difficult to do intarsia in the round, so I ended up having to strand the colors around in order to get it to come out. I know I could have done it flat and seamed it, but I'll do almost anything to avoid sewing. 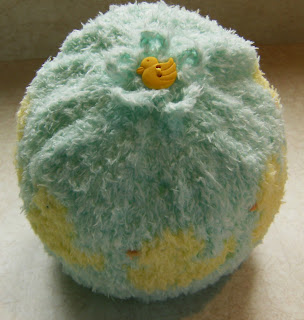 For the top, I just crocheted a little five petal loopy flower and then sewed a button in the middle, just to finish tying it all together. 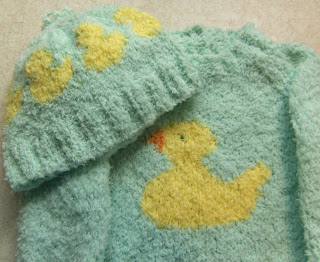 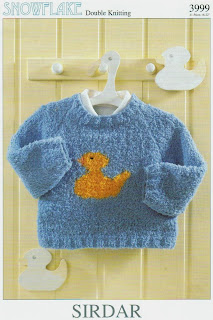 Now that I have this set done, she asked me to do another sweater for her next door neighbor. I really do like my sister, but she'll have to wait because my mom asked me to knit some hats for a charity. More on those later...
Posted by Elaine at 10:01 AM

OH Elaine!! That little set is just precious!! You certainly are a knitting inspiration!!

I'm with you about now sewing seams in knitted objects. Knitting in the round is so much easier than sewing!
Love the ducks!

I am on an iPhone and I can't access the sidebar can you email me the pattern? Email is alice.mikayla.wainscott@gmail.com