I've been on a knitting marathon, which I guess is appropriate since it's Patriot's Day here in Massachusetts, which means no work (yay!), but also the Boston Marathon. All my little grandsons (and their parents) are going on vacation to California next month and so the little one needed some new shorts. Well, maybe he didn't "need" them, but it's a good excuse to knit some up! I've had some special yarn that I've been saving and I realized that if I didn't get going, he'd be out of soakers before I had the chance to use it. The yarn is from Three Irish Girls . It's Lindon Merino and the colorway is "Eire". Very pretty. I was so looking forward to actually knitting this yarn. I've heard such great things about it and the color is just beautiful. If only it could have lived up to my expectations. The first skein was just full of knots! One or two might be okay, but there were six! The yarn isn't cheap and I guess I just expected it to be perfect. I used my favorite pattern from The Knitting Siren called "Sideways Britches". 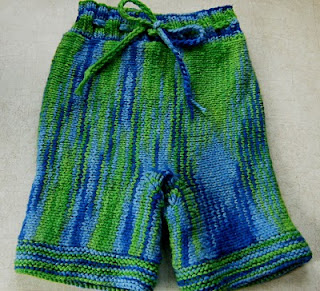 It's not exactly a pattern for beginners, there are lots of provisional cast-ons, but it is well written. I actually got to test knit it last year. I think it is so neat and it does look pretty cute on a two year old's bum! After I finished this one, I decided to use a more traditional pattern. This yarn is also from the same company, but the colorway, "Brennan" , is more tonal. It looks just like suede. You have to touch it to see that it is wool. I found that it wasn't as smooth on the needles as most wool that I use. It kind of reminded me of knitting with cotton as it seemed that I spent most of the time, pushing it along even with my addi turbos. Needless to say, I'm not a fan of this yarn, which puts me squarely in the minority. 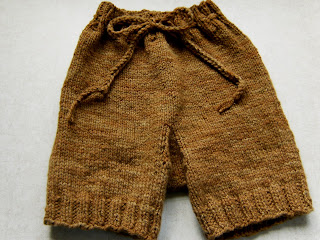 In any event, I decided that if two pairs were good, then three would be even better. This time, though, I went back to an old favorite, Lamb's Pride Worsted. My daughter-in-law tells me that it's pretty leak proof so I decided to stick with the tried and true. This yarn just slips right along and was so much more pleasurable to knit with. The colorway is "Cranberry Swirl" and it's a beautiful deep red. 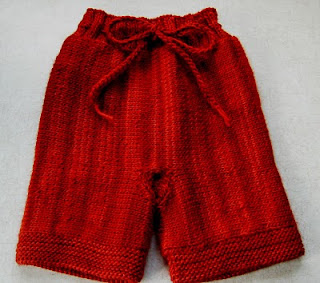 These pictures really don't show the true color. Why is red so hard to photograph? It always comes out with an orange tint! Maybe I just need a new camera. 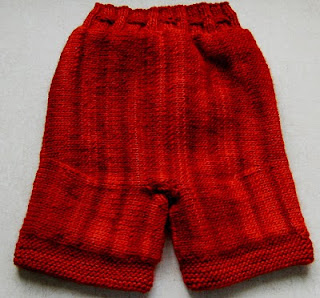 I have to confess that I have started a fourth pair, but I seem to be running out of gas. I'm just not cut out for marathons. I still have time to make the finish line, but I won't be coming in first!
Posted by Elaine at 10:08 AM