Last week my niece, Eliza, came to visit us during her school vacation. I think she mostly wanted to just hang out and enjoy her time away from her brother and to play with our two house cats. We did manage to find a few other things to do while she was here, including a trip to one of our local toy stores. We're fortunate to have three independent toy stores in town. We're definitely a tourist town, so they all seem to thrive. Somehow I managed to neglect to tell Eliza about the other two stores! ;o)

A couple of weeks before her visit, I was at her house and she put on this old hat that I had knitted her a year or so before. It was the most stretched out sorry-excuse-for-a-hat that I've ever seen. It didn't help that she also had it on inside out! In any event, I decided that she definitely needed to replace it. We sat down and scrolled through lots of patterns and she picked out two, but I'm only posting about the first one for now. 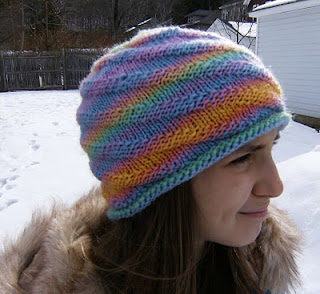 It's called the "Spiral Hat" and is in this book . There are really quite a lot of nice patterns. Usually, I end up buying a book and then when it's time to make something, I forget what patterns I saw and use something I found on Ravelry! This book is an exception. I go to it quite often. In any event, the hat is pretty easy to knit. I do wish that I had knit more rows at the beginning so that the brim rolled a little more. The edge is a little skimpy. The yarn is called Mochi Plus and I used "baby face". It's so soft and feels wonderful when you're knitting it. The problem is that there wasn't quite enough in one skein to finish the hat. Because the colors are so random, it's difficult to join a new skein and make the join invisible. I ended up having to sacrifice quite a bit of a second ball to make the color sequence appear seamless. If you want to make matching mittens or socks, forget it. I'm telling you it won't happen! 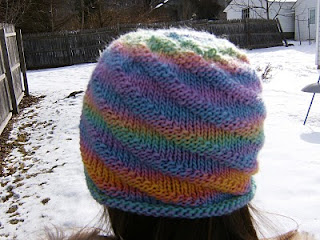 After knitting the hat, I decided that she needed to have some matching mittens. I didn't have a pattern for the mittens though, so I had to come up with my own. At first I was going to try and make them with a "thumb hole" so I could keep the continuity of the spiral. However, I really prefer a thumb gusset. After going back and forth and getting input from my pal, Kathy, I decided to go ahead and do the gusset. The first mitten was looking really nice and all I had to do was try it on and fit it for the length, when Eliza asked if she could have fingerless mitts, instead. 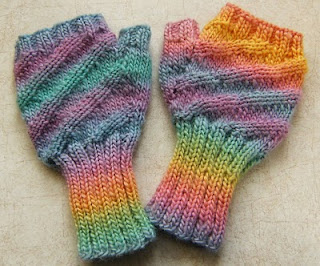 As much as I hated tearing out that mitten, I was happy to oblige. They came out really cute and it wasn't as hard to spiral them as I thought. If I had more time though, I think I would have liked to have made the second mitt spiral in the opposite direction. 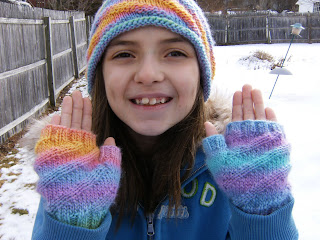 Eliza was quite pleased with her new set. Oh, did I mention that while she was here, she decided to try her hand at casting magic spells? Apparently there are websites you can visit to help you along. (and here I thought she was playing an innocent game on Build-A-Bear!) I was sitting in the living room and she came in and said "Oh rats! It didn't work!" When I asked her what she was talking about, she said that she tried casting a spell to make me invisible! 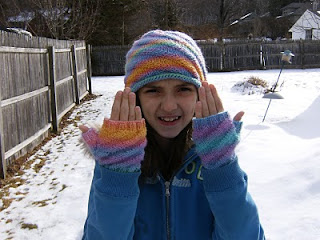 I'm hoping that there isn't a delayed reaction. Hmmm, I wonder if you can still knit if you're invisible?
Posted by Elaine at 10:29 AM

That is a fantastic set, so pretty!!