I'm sorry I haven't posted lately. I did find my camera and I haven't forgot that I promised a new pattern. It's being test knitted right now, so hopefully, I'll have that soon. In the meantime, I've been on a hat knitting binge. We're having a pretty cold winter and everyone needed a new hat. (at least that's what I told myself!)

I found this adorable hat pattern on Ravelry. It's called "Roar" and is available for purchase on Top Toppers or on Ravelry. It was so easy to make and it did look pretty cute on the boys, at least for the two minutes they kept them on their heads! To be fair, we were at a birthday party and modeling for Grandma wasn't at the top of their priorities! Instead, I had to settle for a balloon blown up inside the hat, in order to get the effect. One day, I might actually get a head form! Here's a picture of Jack's, with his matching mittens: 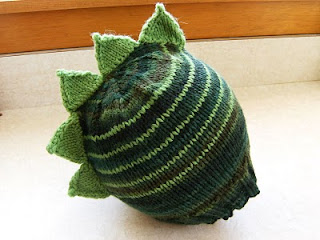 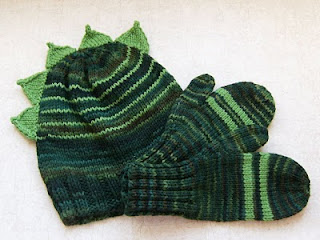 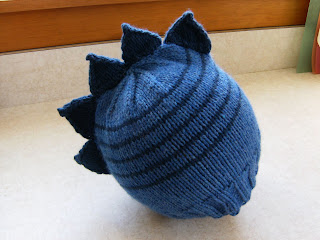 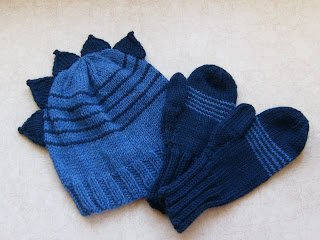 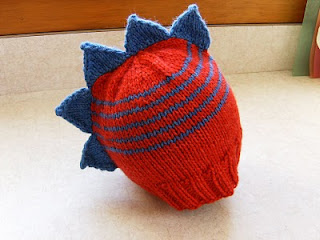 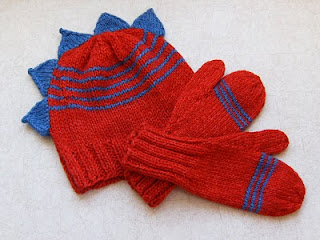 I used Cascade 220 for all the hats and just a basic mitten pattern that I've had for years. It's the same one my grandmother used when she used to knit mittens for me. 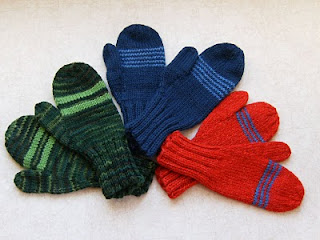 I made a little watch cap that I also found on Ravelry, but also available here. 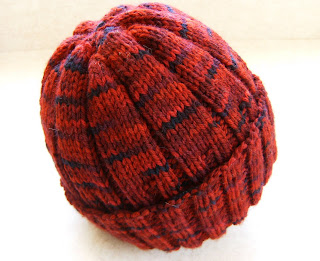 I didn't like the way the decreases came out, so I altered them a bit to make the top more rounded. 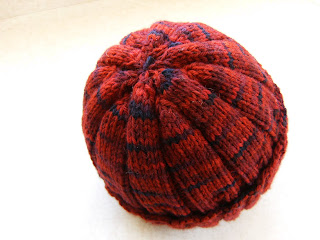 It really did look nice for the short time I saw it. I had some really pretty blue Cascade in the stash and since blue just happens to be Micah's favorite color, I couldn't resist making the Jacques Cousteau hat. I used to love to watch the specials he produced. (Jacques, not Micah) 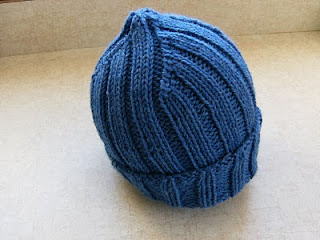 I love the way the top of the hat comes out. It forms this nice little subtle peak. 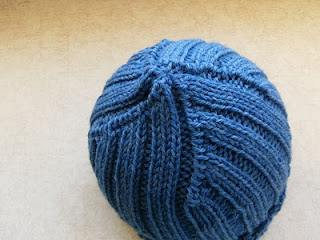 Finally, I think Mom deserved a new hat too, especially since she's having a hard time with the cold this winter. She is from Southern California, after all. Her hat is called "Hurricane". This is another free pattern available here . This yarn is Malabrigo worsted. 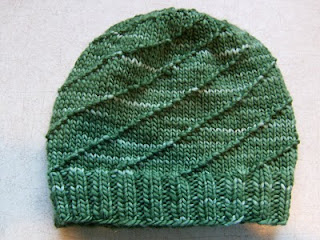 It was so much fun to knit, it practically knit itself. In fact, I wish that it had taken a little longer since I just love knitting with this yarn. Maybe I'll have to knit her another hat out of a different color. A gal can't have too many hats!

Finally, I did knit a hat for my son, which I think is really too short. He insists that it's not, but I think he was just being the polite son that he is. I wish he'd let me knit another inch so it would cover his ears. His pattern was really neat and very masculine, but alas no picture of it. You'll just have to take my word. At least there are now some warm heads here in New England. I hope you're warm too, wherever you are!
Posted by Elaine at 4:49 PM

I'm glad you found your camera. I can't wait to see the newest pattern.

I am knitting Johnny the Roar hat,too. I knit one and it was too small. I knit another bigger one and have three more spikes to knit and sew on. The spikes are hard /horrible for me. Johnny saw the pic and said that's my dinosaur hat. Whenever he sees me knitting now; he says it's my hat, Grama.
HUGS
Susan

Oh....love all the hats. The dinosaur hats are just precious. I have knit multiple hats for BG, and what does he wear - his hood! I guess it is easier to keep on his noggin! Love the mitten pattern too. For some reason I just love knitting mittens for little kids. Go figure....????

We are having another snow storm. Sigh... but, we got a seed catalog in the mail today - sure sign spring will be here soon! There is hope at least!

Love your roar hats!!! I'm going to have to knit one or two!!

I love the stripes on your Roar hats! Beautifully done!