Is there anyone who hasn't knitted Rhonda White's
Darrell Waltrip's Dishcloth ? It's a great cloth especially for showing off all those gorgeous variegated cottons. Plus, it's so much fun to knit! Since I always seem to pick up balls and balls of ombre, I thought it was time to come up with a design to actually use some of them. What better way than to combine my favorite dishcloth pattern with a bib. I originally did this for the 2009 Dishcloth Calendar, but since it's been a year, the design has been released back to me. This is a really quick bib to knit, as once you have the pattern established, you don't really need to look at the directions and it's easy to tell where you left off. 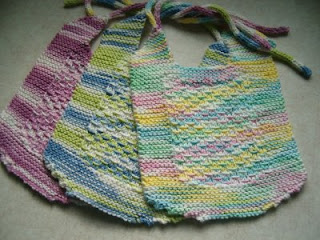 Copyright 2008 by Elaine Fitzpatrick. Permission is granted to make and sell items from this pattern provided that credit is given to me as the designer. Permission is not granted to reproduce the actual pattern, or post it, or distribute it, without my express permission. Please respect my copyright and play nice!

Size: approximately 8" from neck to bottom and 7.75" wide

Materials: One skein of worsted weight cotton. The pictured bibs were knitted in Peaches & Creme Lilac Ombre, Sea Mist and Shades of Spring.

Abbreviations:
k = knit
p = purl
sts. = stitches
dec. = decrease
sl2 wyif = slip two with yarn in front. Bring yarn to the front as if to purl, slip the next two stitches, then bring yarn to the back. This forms a bar across the two slipped stitches.
garter stitch: knit every row

Knit 13 sts.; bind off next 12 sts. knitwise; knit remaining 12 sts. You should have 13 sts. on each side. Place first 13 stitches on a holder and work on remaining 13 sts. in garter stitch as follows: