I learned to knit from my grandmother when I was six years old. She taught me using some old, pink plastic needles that were slightly bowed in the middle.  I still have that set of  U.S. Size 8 needles and they're one of my most prized possessions. I used a lot of Red Heart acrylic in those days, since I hadn't discovered the joys of using natural fibers.  However, every once and while, a project will pop up that calls for some acrylic yarn and I go back to that stiff, plastic stuff that's torture for me to use. I wouldn't exactly say that I've become a yarn snob, but I do wrinkle my nose at the notion of using acrylic. In any event, awhile back, I was surfing around Ravelry searching for the perfect infinity cowl.  I wanted one that could be doubled, had a neat texture, and was knit back and forth with a few stitches, rather than a huge circle with tons of stitches. I finally hit on the right pattern, it had all of my requirements and I loved the sample that was done in gorgeous shades of blue.  Imagine my surprise then, when I saw that the yarn was 100% acrylic. Not only that, but it was bulky! Blues Infinity Scarf is a free pattern that's knit with James C. Brett's Marble Chunky. I know that I could have used other yarn, but I loved the look of this one so much, I decided to give it a go and I'm happy that I did. 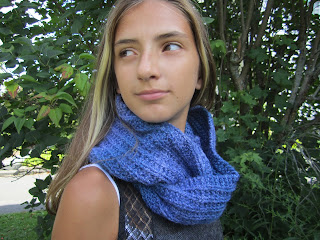 The yarn was actually quite nice to knit with and it has a "woolly" feel to it.  You only need one ball as it's very large with 341 yards.

Here are the modifications I made. I did a provisional cast on of 27 stitches using U.S. Size 10 needles. There are only two rows to the pattern and one of them is a knit row. I began and ended with the second pattern row so I could graft the ends together easily. For the second pattern row, I began and ended with knit 3. In other words, instead of "p1, k1", I did "k3, (p1, k2) x7, p1, k3". This produced a nice garter stitch edge on both sides.  The length of  54" that the pattern calls for, was perfect for doubling. 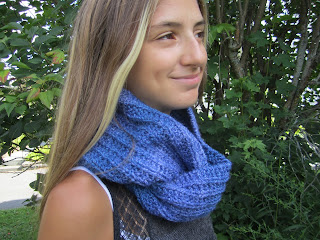 I will say that I found it a little boring to knit, so I kept it in my car and only worked on it when we were travelling.  It does knit up rather quickly with the bulky yarn and large needles. I knit half of it on our trip up to Maine and the second half on the way home!

As luck, or fate, would have it, my husband came back home from one of his walks around the block, and announced that our local sewing shop was having a yarn sale. First, I didn't even know that the shop carried yarn. I mistakenly believed that all they did were alterations and repairs. I had no idea that they had any sewing or knitting inventory at all!  I immediately got in the car and drove downtown, not expecting to find much!  As it turns out, she had several really nice lines of yarn, including the Marble Chunky!  Not only that, but the sale was for 30% off as they aren't going to continue the retail part of their shop.  How could I resist that? I picked up a couple more balls as I'm fairly certain my sisters will want to take my scarf as soon as they see it.  I thought it would be good to be prepared!

With one of the balls, I knit this cozy shawl for myself. The colors look slightly washed out in this photo, but they're wonderful fall colors! 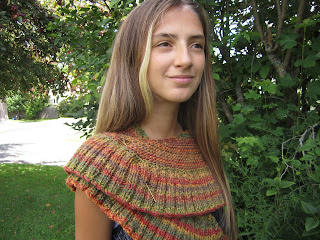 This is the TVG (High Speed Knitting) pattern by Susan Ashcroft.  It's designed for any weight of yarn.  She has some wonderful patterns and they're all very well written and test knitted. 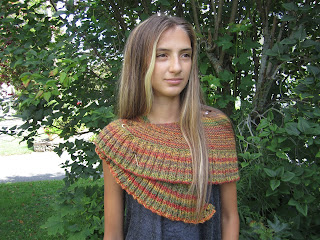 Again, this only used one ball of yarn with the U.S. Size 10 needles, and I still had some leftover!

This post wouldn't be complete without a huge thank you to my beautiful niece, Eliza, for helping me out with the modeling. She came to visit us for a few days. I jokingly told her I was going to tell all of you that the pictures were of me! LOL!  Oh to be young and thin!! I just wish that I had my other shawl blocked so she could have modeled that as well.  I guess she'll just have to come back for another visit!! Thanks Eliza!