You might remember that I did a blog post awhile ago showcasing a pretty cowl pattern that my pal, Tracy, designed. Well, she's been at it again and I agreed to test knit her new pattern as well, called Step Up. I had been wanting a long cowl that I could loop around my neck, and this was perfect. 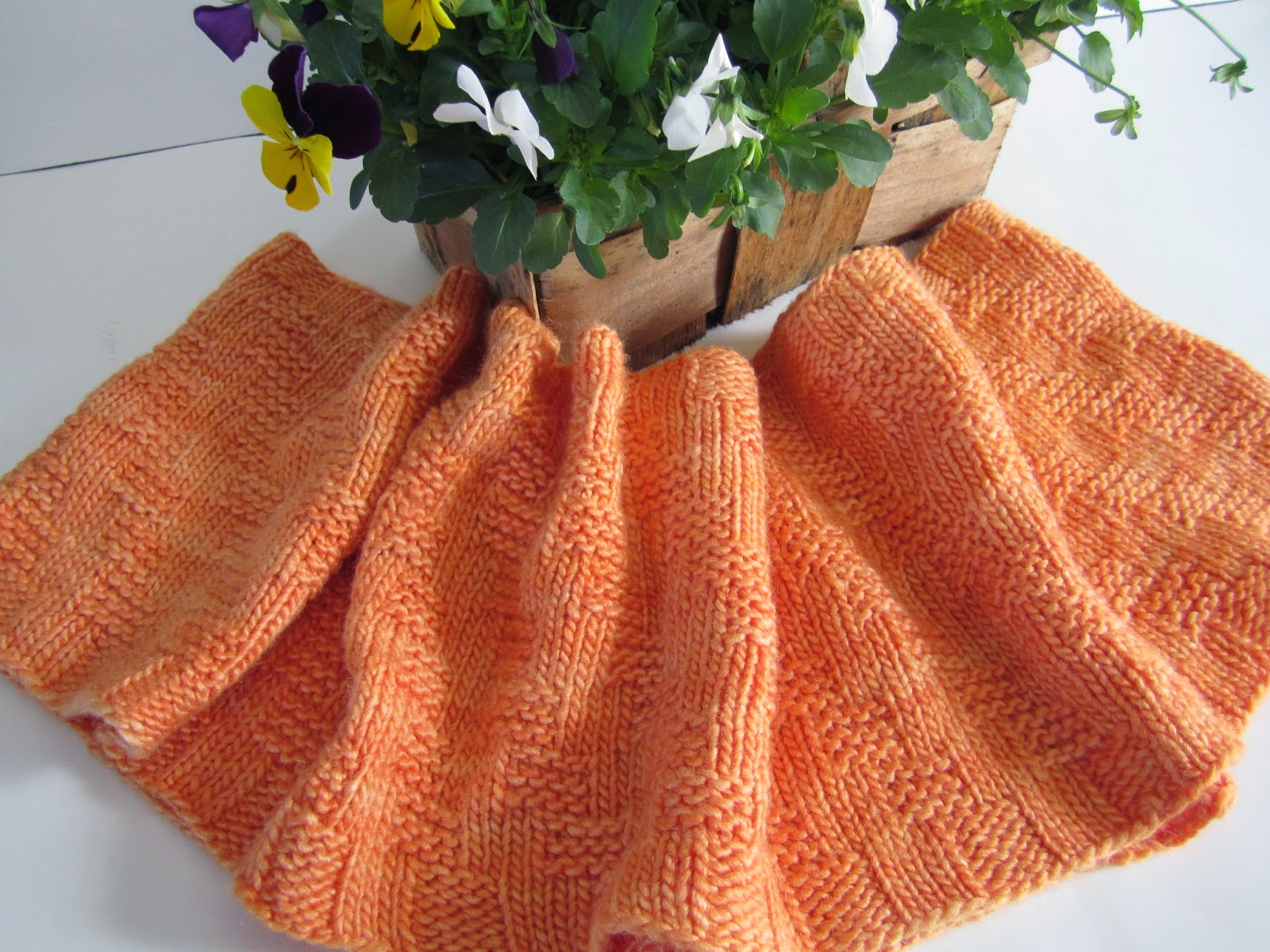 I used some Malabrigo Silky Merino that I had lurking in my stash. I enjoyed knitting the cowl so much that I decided to take the stitch pattern and make some matching mitts out of the leftover yarn. 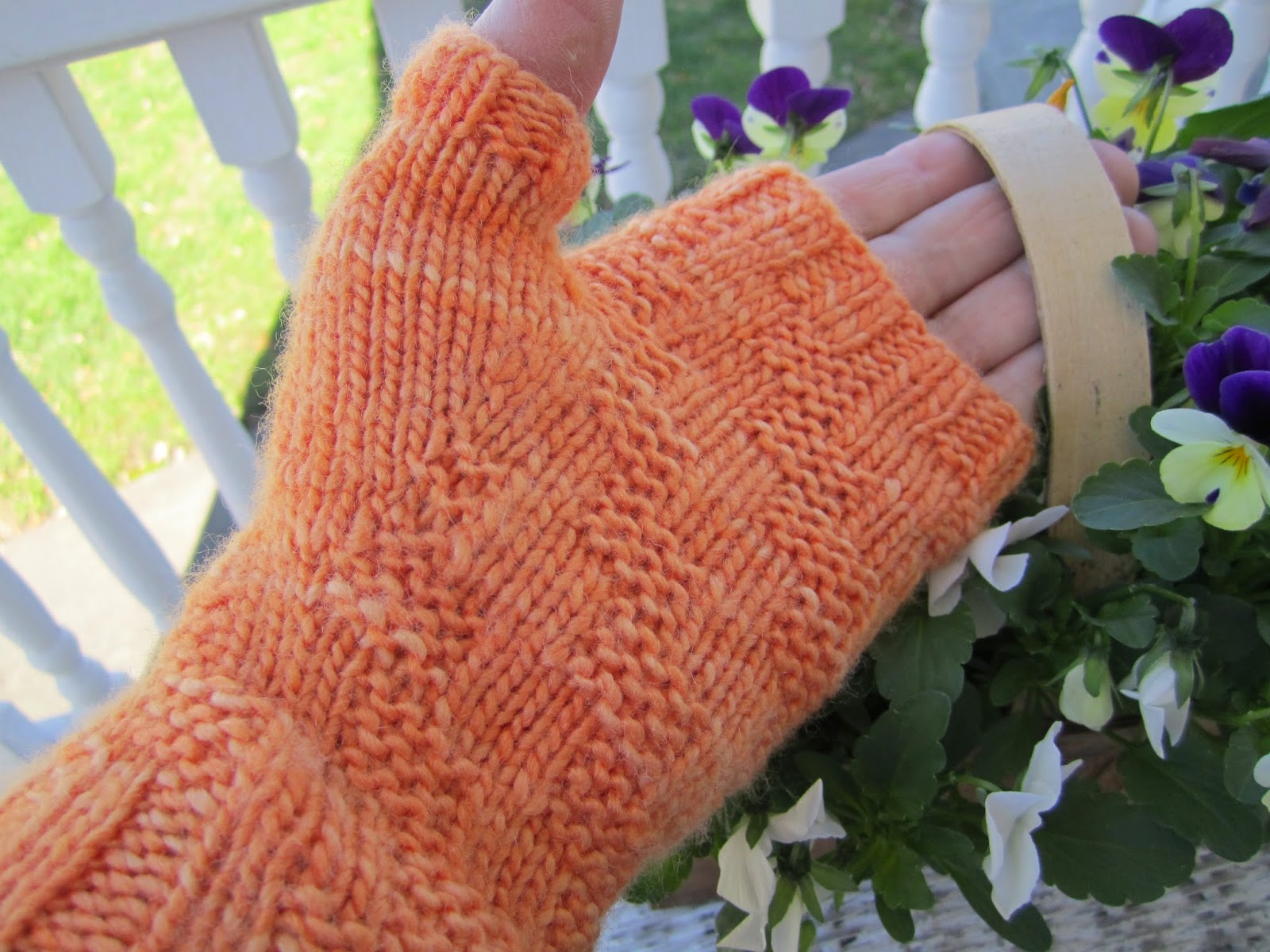 I used 40 stitches for the cast on and U.S. Size 6 needles. They came out a perfect size for my large hands!

If this wasn't enough, I began to think that this pattern would also make some neat socks. Mickey told me that I HAD to make him some new socks as his toes were sticking out of the pair that he was wearing! He told me that they "were kinda uncomfortable!". Gee, ya think?  I was planning on skipping out on sock knitting for awhile after I knit so many samples. Still, who can refuse a sweet eight year old? 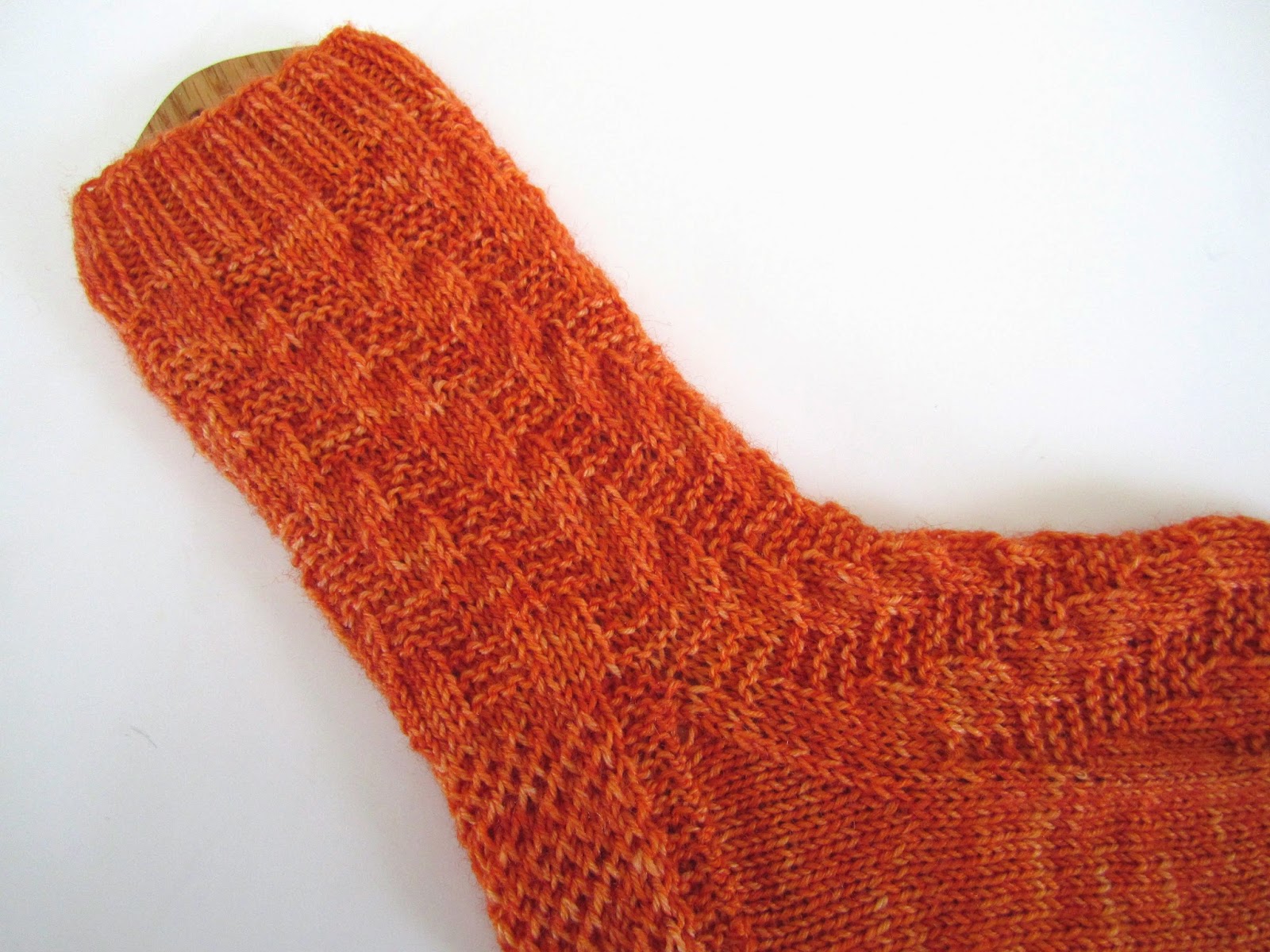 I asked him what color he wanted and he told me he was "sorta" into orange! This is a special colorway that Jenny dyed just for me. She named it "Micah" after my grandson. I don't know if he was more thrilled with having a new pair of socks or having a color named for him! (I have to get him to stay still long enough to snap a picture with him actually wearing them!)

I think it's fun to take a pattern and change it up a bit. I also did the same thing with a couple of the baby hats that I knit for the hospital. I loved knitting the Honey Badger sock pattern and I thought it would also make a nice hat! 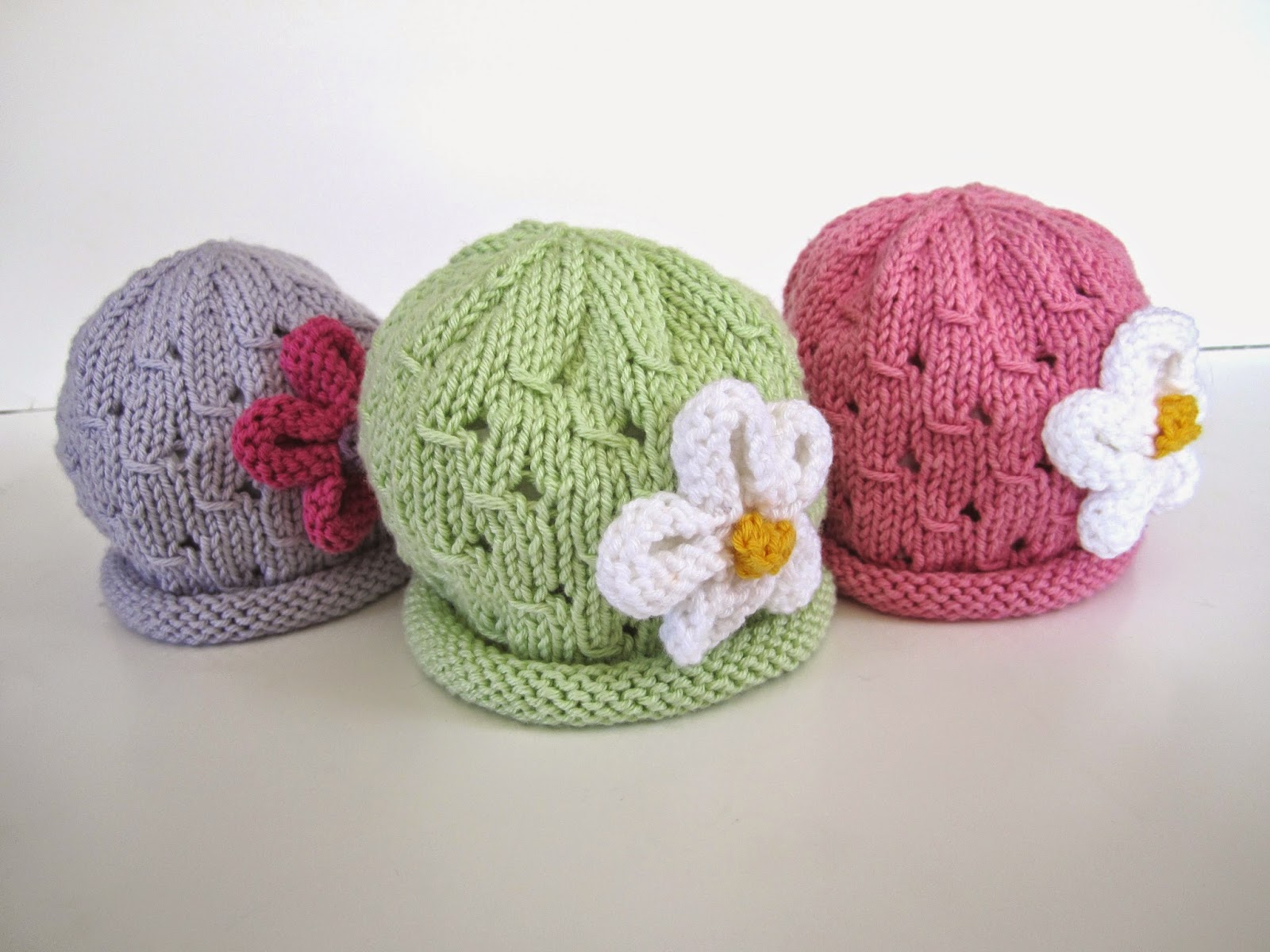 Perfect for springtime! When you knit this pattern from the bottom up, the little "bars" are under the eyelets. These hats only use 60 stitches and knit up really quickly.

I came across another hat that a fellow Raveler had knit out of the Cupcake Mittlets pattern. Sossidge was kind enough to post her hat and share her modifications. She used a dk weight for hers, but I used my usual worsted weight (Plymouth Yarn's Jeannee). She had a cast on of 80 stitches, while I only used 60! 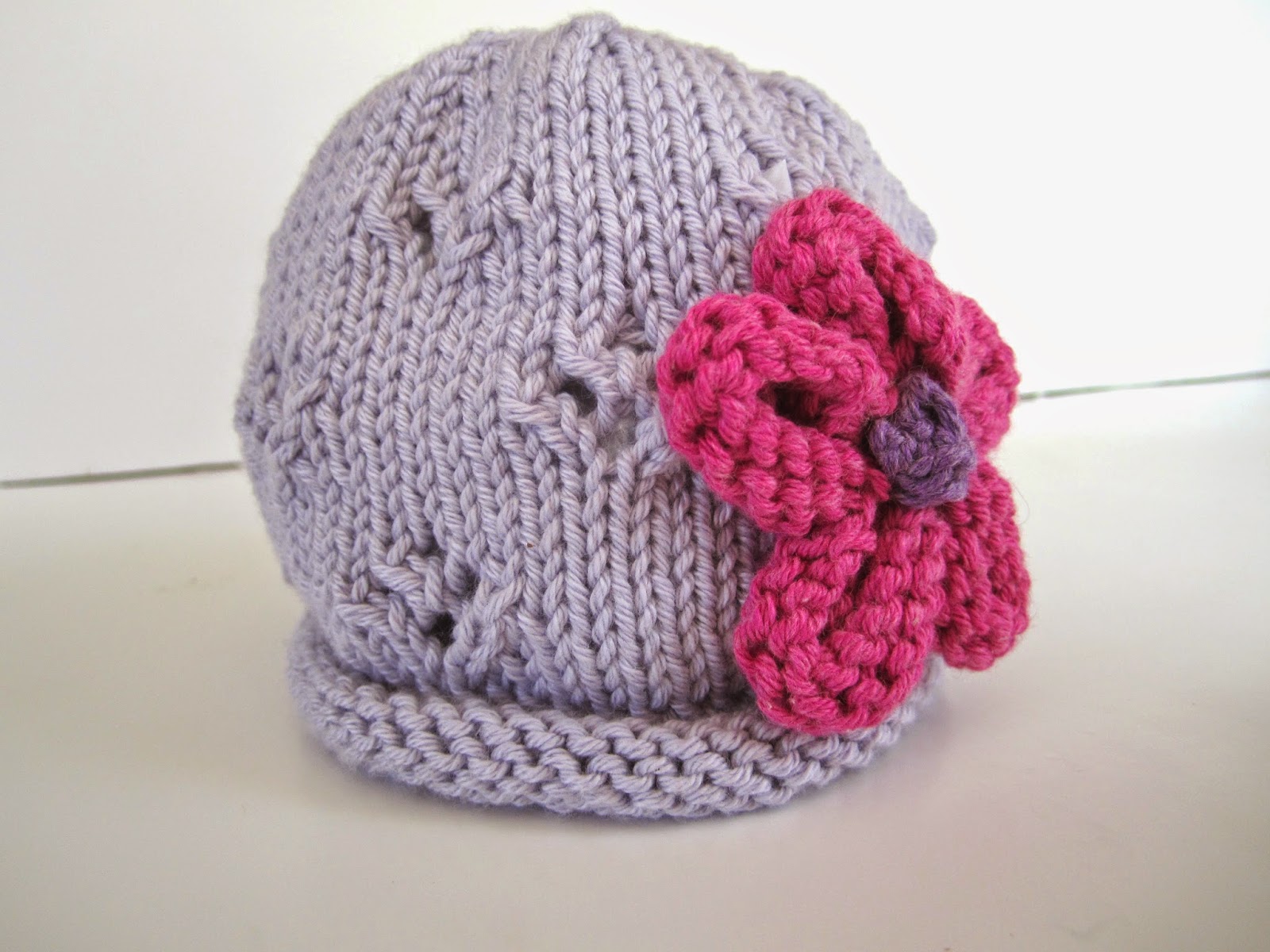 The flower is knitted using a great tutorial called Knitted Flower Tutorial . I always have trouble trying to crochet a flower that looks decent, so this was a great find for me! Really easy with great results!

Now, are you ready to hear some disturbing news that I received from the hospital about my little hats? Apparently they were such huge hit, they started disappearing before they could be delivered to the new moms. I can't imagine what kind of person would take them, especially since they supposedly work in a caring environment. I wonder if they tell their recipients, "here's a hat I stole for you!".  In any event, there's now a new distribution system in place to protect them! Unbelievable!
Posted by Elaine at 2:23 PM

Your talent amazes me. I love the color and pattern of the cowl and mittens. I enjoying seeing photos of your creations. Thanks for sharing.