That's the expression that my grandma always used on hot, humid days whenever anyone asked her how she was.  She'd always reply "I'm hot and stupid.".  It always made me laugh, but now that I'm older I'm starting to understand exactly what she meant!

My mother and sister were invited to a baby shower for a really distant cousin.  Naturally, whenever a baby shower pops up, they immediately turn to their resident knitter for help.  Since we know the baby is a boy and since I have lots of experience knitting for boys, I agreed to make something.  Unfortunately, I guess I should have stuck to a tried and true pattern instead of trying to get creative.

I started out with deciding on a bear theme this time around.  The last baby project had a duck theme and I wanted to do something different.  I picked Plymouth Yarn's Jeannee.  It's a nice soft yarn and you can machine wash and dry it with hardly any shrinkage.  I used it for Ruthie's blanket awhile ago.  Then I wanted to use my Sweet Tee pattern and turn it into a cardigan.  I added four extra stitches to the cast on so I could have button bands with five stitches.  So far so good.  I drew a bear head that I wanted to knit on the back. It was small enough to fit, so I started.  I hadn't got very far along when I realized that somehow I had managed to put a hole in one of the sleeves.  I didn't mind ripping out at this point as I hadn't got very far. However, it was soon becoming apparent that this bear head was going to be too big.  Back to the drawing board to scale it down and another rip.  This time, I managed to get all the way to the bottom with only the band left, but I just wasn't happy with it.  I thought the bear might still be too big. 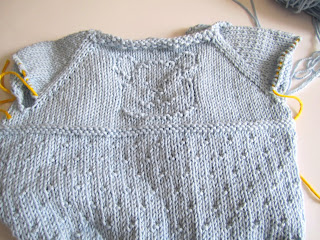 At this point, I didn't feel like ripping it out and starting all over again, so I went back to the drawing board, yet again, and did an even smaller bear.  I pushed the sweater aside and, reluctantly, started a second sweater with a new ball of yarn.  I was only about four rows into the pattern when I decided that this time the bear's ears looked more like a cat than a bear.  One more rip, one more design.  This time I made it to the underarms.  At this point, I thought I would stop and snap a couple of pictures to document my dilemma. 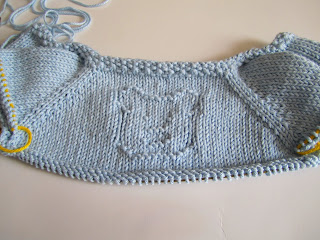 A funny thing happened.  When I looked at the first sweater, I decided that the bear didn't look that bad after all.  In fact, I liked it a lot better!!  After two days and five rips, I went back to the first sweater and decided to just finish that one!  I even found these cute buttons. 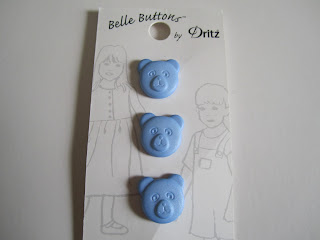 They're a little brighter than the yarn, but it's the same shade so I think they'll work.  I have a huge button stash, but I didn't have anything that would work.  (I can't believe how expensive buttons have become!) Anyway, I'm glad I had the presence of mind not to rip out the first sweater.  I blame all this heat and humidity.  That's my excuse and I'm sticking with it!

I'm knitting a hat and some tube socks to go with the sweater.  I also knit some bibs, including a brand new bear, which I'll post when I get this whole set done.

Now for the kicker.  The other day in the mail I received an invitation to the same shower!  Sigh.  For my gift, I'm going with something tried and true.  Maybe a Baby Surprise Jacket.  Over 20,000 projects have been posted on Ravelry so that bodes well for my chances.  At least I hope it does, if we don't have another heat wave.
Posted by Elaine at 11:03 AM

Looks cute! Maybe pattern? I am not a skilled enough knitter to improvise with knitting patterns. I do fine with crochet patterns.

Sorry that it didn't go well the first time with the sweater, but I'm glad it all worked out.

I am really excited about the new teddy bear pattern. I haven't made the other two yet, but I am planning on making those with a teddy bear hat and sweater as a shower gift. I think it would be such a cute theme. I even have a card picked out to match - although I don't know of any baby showers coming up, just planning ahead. I guess I am lucky you had the same theme idea so there was a brand-new pattern designed especially to match my theme. ;)