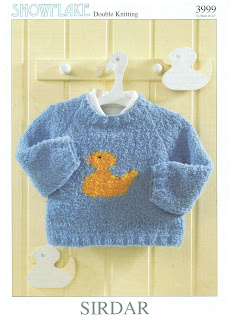 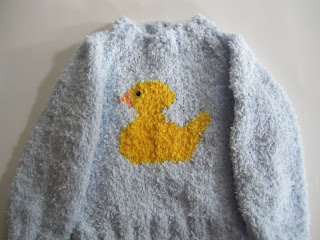 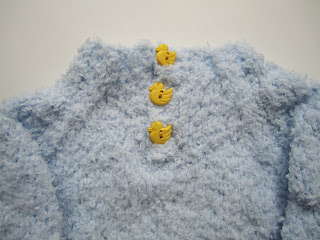 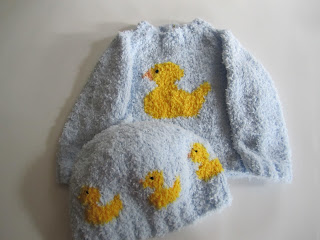 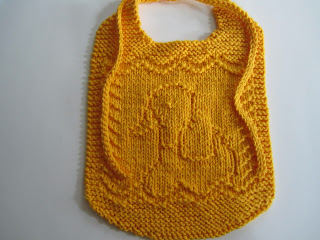 On a more positive note, when I finish this sweater, I'll start on the new patterns.  One good thing is that I won't have any more of this yarn when the sweater is finished so I won't have to make another.  For a girl anyway.  I do still have lots of blue. .
﻿
Posted by Elaine at 4:26 PM

Yikes.. sorry that you have to keep making the same sweater, it is really cute though. And with luck you won't have to knit another one for a while. I love your bib! I need to try out more of your patterns, they're so great! :) I'm a long time lurker, but it sounded like you needed some cheering up. I'm also sorry to hear about your aunt, she sounds amazing.

Such a cute baby gift! Love it!

Sorry for the loss of your Aunt. Isn't it wonderful that you had such a terrific relationship. I'm sure you will miss her, but your memories will eventually bring some comfort...eventually. Take care.
k

Please accept my sympathy for the loss of your aunt. I have one I absolutely adore, and like you, I was in her wedding about 45 years ago. Her health is now deteriorating quickly, and I know I will lose her soon, but I will have the memories.

The baby gift is adorable. I've knit and crocheted with that yarn, so I can appreciate how much of a pain it is to work with. I'd like to thank you for posting the patterns. I've made dozens, and am sending a couple of sets to my cousin who is due any day now.

What a cute sweater and I have made that bib before I loved it.

I can't wait for the new bib patterns. My sister and I knit bibs for people who are having babies and give them to them after the baby is born. It is a cheap and fun baby gift.

Sorry about your loss. You will forever have those wonderful memories. Thanks for sharing that story with us.

Can you tell me where I can get the pattern for the little duck sweater? Could you send it to me?

Everything looks so adorable!

I'm sorry for your loss.