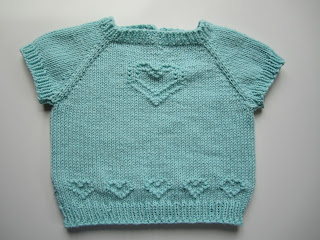 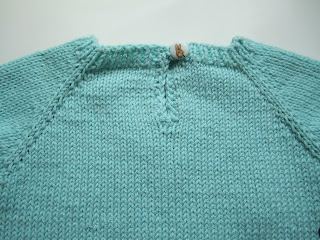 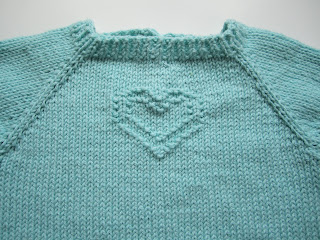 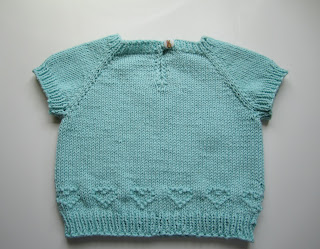 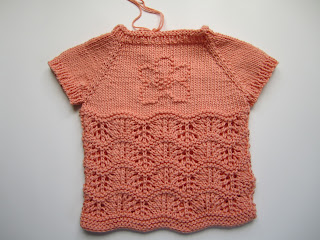 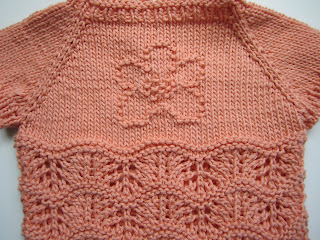 Those baby t-shirts are so cute!! Go ahead and write the pattern and I will volunteer to test knit them for you--lol! You are very creative, not to mention generous. Thank you for the freebies. Vicki

Sorry about the lack of comments on your bunny bibs. I love your patterns and am working on a version of patterns for a baby blanket myself. It'll be a while before it's done, as I have several projects on needles. I do however, make your cupcake cloth several times a year for friends' birthdays. I love your designs and you are so generous. Thanks!!!

Write up the plain one with instructions for adding one's choice of animals from your bibs/cloths, and I'd pay good money for it! (my best friend is pregnant, and I am aiming to make pretty much anything I can with her own favorite animal on it for my honorary niece or nephew)

Speaking of the bib patterns though - have you done any with ties of any sort other than the icord? Mine looks horrendous, and it drives me up the wall...

Your shirts are very cute, but I hope you don't stop doing the bib designs. I love them - maybe we should all tell you that more often!!

I love baby items and these are really cute! But I love your bib designs too so please keep making them!!

These are adorable shirts.

very cute, you have nice ideas and althoght i can nou use these one, couse i have boys, thet give me inspiration

I am a great fan of your bibs and cloths! We are out here silently enjoying them. :) Love these t-shirts too so I hope you do write them up. You are the first one I visit when it's time for a baby gift. Blessings!

I can't wait to try these, but PLEASE don't stop with the bibs and cloths. You have no idea how many of these I make for baby showers, friends' who have friends or family having babies, craft shows, etc. I check your site at least once a week hoping for new designs.

Now I get to add these adorable shirts. Thanks for sharing your creativity with those of us who lack the design inspiration for whatever reason.:)

Well, apparently I panicked at the thought of no more bibs for a while. I just realized you hadn't posted the pattern for the shirts. If you decide to post them, I can't wait to try them. LOL.

Oh I love them!!! Definitely write a pattern, Id buy it to make for my baby girl!!

I'm just waiting for payday to get some solid color cotton for a couple of bibs -- there's a new baby girl in the neighborhood. And the sweater! I'd be willing to pay for that one.

Beautiful!!!!I'd love to test your pattern - please write one -- you are just amazing - I have made virtually every pattern -- thank you so much for sharing -

I love your patterns and was actually pondering contacting you to find out where you might have others available. I have the 2011 Dishcloth calendar and ADORE the ones there. Are you in any more of Janet’s calendars? Or maybe the Peaches & Crème booklet?

No way! You should not stop with the bibs and cloths. I love them and am working my way through knitting all of them. They are wonderful and make such great quick little gifts. Thanks for sharing your talent with all of us!

I'm not much of a "commenter" but decided it was time I told you how much I love all your bib and washcloth patterns and often are the first ones I go to. Now I have a baby blanket and a t-shirt patterns to love!! Please do write up the pattern for the t-shirt. I love your ideas for variations, and I can see it would be another "go-to" pattern for me.:-) You are such a talented lady and thank you for sharing that talen with all of us!

I love your patterns. I made a washcloth out of your Hearts for Ruthie, for the pregnant granddaughter of a friend. She loved it! Her name is Lacee, so when I saw the lacy shirt, I just knew I would love to have this pattern. I would even pay for this pattern, as cute as it is. Having tried (once) to design a dishcloth, I have some understanding of the process and of the difficulty involved.

Keep up the good work.

I used two of your bib patterns...the bunny tails and imp. Instead of knitting the design into the bib, I used the duplicate stitch in contrasting yarn to make them stand out. I have them for sale on yardsellr....(I did mention you as the designer)
https://yardsellr.com/for_sale#!/3-knitted-baby-bibs--cotton--free-ship-5340365
Thank you so much for sharing your patterns! They are all very cute!!