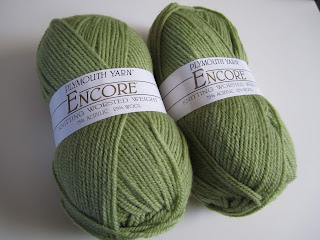 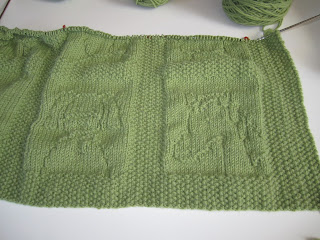 You might recognize the horse and the puppy patterns.  See how carefully I avoided showing you the square on the left?  That's a new pattern that I haven't posted yet!  Actually, I think there are four brand new designs that I'll be using.  This blanket does have a theme so I needed to come up with a couple more animals to have it work out!  I'm not a fan of large projects, so I hope that by posting it, I'll have the incentive to stick with it.  If I start slacking off, you can hold my feet to the fire!
Posted by Elaine at 11:11 AM

Nice to hear from you, even though not necessarily "good" news. Sorry for your loss - it's always especially difficult this time of the year, and considering your special set of circumstances. So sorry....
k

Sorry for your loss. It sounds like you went through a really difficult time. I think your blanket is fabulous - what a great idea! Is the horse one of your free patterns? He is great!

I'm so sorry for your loss, esp.; during the holidays. Our prayers will be with you all during this time.

I love the blanket & love the color. Cascade is such a nice yarn to work with. I can't wait to see the finished product.

Are you using charts to knit this blanket?

I am so sorry to hear about the death of your sister in law. Glad she had everything planned and made it easier for the family. The afghan you are working is awesome. I have always wanted to do something like that but freaked out with the thought of combining different patterns, and calculating the sizes... So cute! Your daughter in law is one lucky recipient!!

I sending thoughtful prays your way for your sister in law. And a wonderful idea she had for her last arrangements. I also think the blanket your making is wonderful. And excited on your upcoming new designs in this beautiful blanket.