I finally finished my pretty shawl from Sarah Franklin called "Among the Heather".  This was the KAL that was sponsored on Ravelry and I was excited to do it.  I love Sarah's patterns (especially her sock patterns) and I've never participated in a KAL for any project other than a dishcloth! 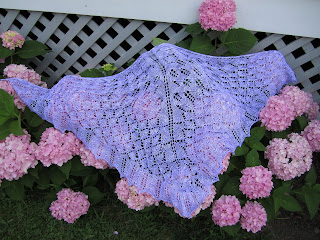 Turns out, I was the only one who participated, so it was the same as if I just knit any regular project! Oh well, I didn't mind as it's very pretty.  I actually finished awhile ago, but I finally got around to blocking it. 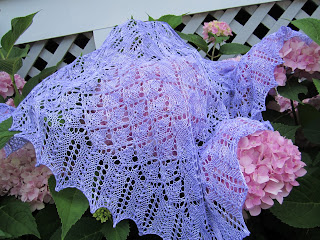 The yarn is 100% hand dyed bamboo that I bought on Etsy a few years ago.  Unfortunately, it's no longer available and I haven't been able to find a suitable alternative yet.  I didn't have quite as much yardage as the pattern called for, so I had to cut out a couple of repeats in order for it to work.  As it turned out, I had more than I thought and I wanted to use as much as I could, so the edge of the shawl has more rows than I normally would do. 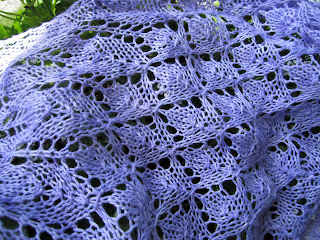 ﻿
To say that this yarn is incredibly splitty, is an understatement.  I had to concentrate on every stitch, but then again, it is lace and I have to pay attention anyway!  It does have a beautiful drape and sheen.  My sister has her eye on it, but there is no way I'm letting her have it!  For once, I actually knit something for myself! 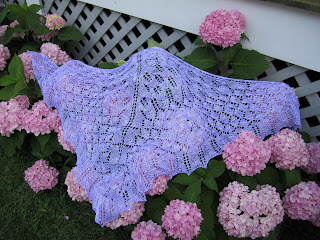 Check out my beautiful hydrangeas!  They're called "Endless Summer" and depending on the soil, they're either pink or blue. Aren't they gorgeous?  I live in a big old Victorian house with this wrap around porch and I planted them a couple of years ago.   The first year they didn't do much and last year I only had a few blossoms.  This year, they've really taken off and I just love them. 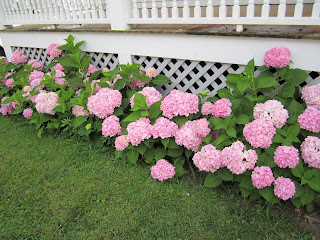 I actually bought them at my grocery store!  I figured if they could keep them alive, then they'd stand a pretty good chance of surviving at my house too!
Posted by Elaine at 8:21 AM

The shawl is beautiful.

What a gorgeous shawl..... and I love your hydrangeas..... I'm too far north to have anything other than the annebelle variety, so I'm always delighted to see houses graced by their beauty! By the way, I stalk your blog for patterns frequently. Thank you!

Your shawl is just gorgeous!

Both are so pretty. if I didn't have so many shawls either made or queued, I'd make that one also.
I have Endless Summer too; I planted a lot of different hydrangeas around my place- they range from deep blue to pink to purple.

Love the shawl -- and your color choice, it is so beautiful -- thank you for sharing the gorgeous photos.