I can't believe that I actually agreed to join a KAL for a lace shawl!  What was I thinking?  I still haven't blocked the three that I've already finished, so I have no business starting another!  Oh well.  This all came about because of a pair of socks that I knit for Mickey and posted on Ravelry called "Following Seas".  I loved the pattern and discovered that there were actually a number of other patterns that I liked equally well.  The designer is Sarah Franklin and her website is Apple Blossom and More.  She wrote me a nice note about the completed socks and I found her new pattern for the shawl.  I've never done a KAL for anything other than a dishcloth, so this is all new to me.  Truthfully, I don't even know what the guidelines are, except I think I'm supposed to have it done by the end of the month.  This is what I have so far: 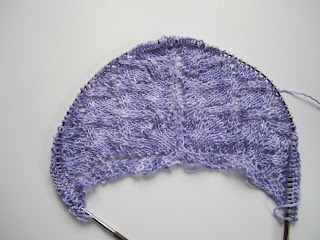 I'm using some bamboo yarn from my stash and U.S. Size 6 needles. 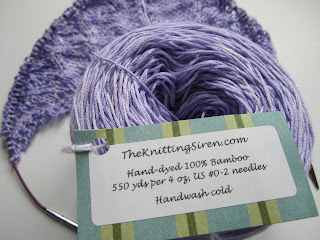 I've used this yarn before when I knit a Shetland Triangle.  It has a wonderful drape and it's so soft!  I only hope that I have enough.  The pattern calls for 650 yards and I only have 550.  I guess I'll be leaving a few repeats out so I'll end up with a shawlette!  That's good, because that's all I really want anyway.
I'd be further along, but in case you've been watching the news, we had a tornado rip through Massachusetts.  We live about an hour away from where it hit, but both of my sisters and my parents were right in the path.  They're all okay.  My parents live with one of my sisters and they lost a huge tree which fell across the neighbor's driveway and is presently blocking his garage.  Thankfully, it missed the house.  They also lost an outdoor shed and now my father's tools are distributed all around the neighborhood.  They'll probably be without power for a couple more days, so today they're going to try and buy a Coleman lantern.  They'll be camping inside instead of outside!  In any event, it's hard to knit lace and watch the television at the same time, especially when you know the area!  I had to rip out several rows since I wasn't giving it my proper attention.
So that's my excuse for not being further along.  I wonder what excuse I can come up with for next week?
Posted by Elaine at 1:40 PM

The shawl is looking lovely so far, Elaine. It seems your family were very lucky, but a very worrying time