Enough already!  I surrender.  It seems as though everyone in my family, at one point or another, has been ill these last few weeks.  Even my husband, who NEVER gets sick, missed one whole week of work!  I thought he would go crazy having to stay inside, but somehow he survived, thanks to the Western channel and lots of books. I'm happy to now report he's back to his old self.

So then, what have I been knitting?  Actually, quite a lot.  I finished up an old shawl that I started two years ago and knit another one.  Neither of which have been blocked, but here's a couple of "before" pictures: 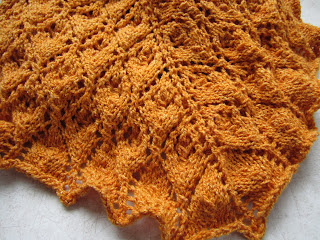 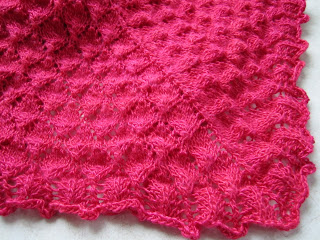 ﻿The gold is Elsbeth Lavold's Silky Wool, which is a lot rougher than I thought it would be and the "pink" is Schaefer yarns Audrey.  The colorway is "Clara Barton" which you think would be a nice vibrant red, but instead it's more of a rose.  The picture is actually a little lighter than in person, but I have a feeling that it will probably end up with one of my sisters, as I'm not crazy about any shade of pink/rose/fuchsia.   I'll decide how I feel about it after it's been blocked. (IF it gets blocked!)
Mostly though, I've been busy working on some designs for a new book that's going to be a tribute to Peaches & Creme.  The same crew that does the calendars decided on putting the book together and using designers that use P&C.  That makes me qualified to contribute.  I have no idea when it will be ready, but I know that I have to get myself in gear and get moving.  I'm also supposed to host a KAL for the Monthly Dishcloth group pretty soon and I'm trying to come up with a design for that too.  They chose an older pattern of mine, but it's not one of my favorites and I'd like to substitute it with something brand new.  The problem is that the pre-packs contain light green, so whatever I do, it has to work in that color!
I also have two new patterns that are just waiting for me to put them together.  They've been test knit and the only holdup, as usual, is me!  I'll try to get one posted in the next day or so. (keyword:  try).
I've also knit a few more socks for the boys.  Just basic non-thinking projects: 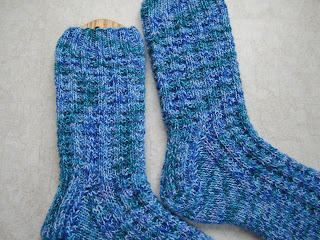 All three of these are the "Hug Me" pattern that was the featured sock in the Six Sox KAL Yahoo Group.  They have great free patterns and lots of tips.  The pair above is knit with Tofutsies and the bottom two are knit with Deborah Norville's Serenity sock yarn.  It's inexpensive, but it's nice to work with and it holds up really well in the washer and dryer, or so I'm told.﻿
﻿ 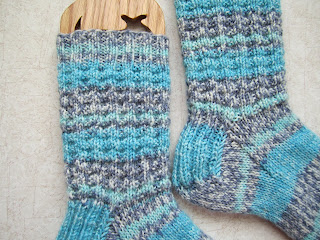 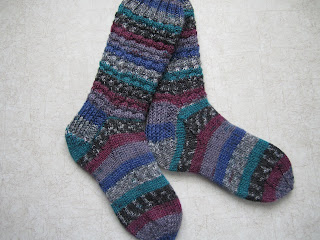 I have a couple more, but I'll save them for another time.  The boys all came up for a visit last Friday, and each of them had on a pair of socks that didn't match.  Six different socks.  Seven year old Jack had decided, on his own, to dress all of them before Mom and Dad got up and, apparently, they don't have a problem with mismatched socks.  My son suggested that I just knit about ten socks all in the same yarn and pattern.  Oh yeah, like that wouldn't be boring!  No thank you, I'll stick to the mismatches!
Posted by Elaine at 9:51 AM

Wow! You have been busy. I'm looking forward to your KAL, I absolutely love your cloths! Thanks for all your hard work.

Hope "the fam" stays healthy. Good to see you back online again and always thrilled when you have new patterns to share. Your generosity is amazing.

Don't give up on the pink shawl. It's lovely even if it's not your colors. Once it's blocked, someone will love it!

Glad to hear everyone is feeling better. love the first shawl. the pattern for the second one is pretty as well but not a fan of the pink family. can't wait for the next cloth.
happy knitting