Thank you, thank you, thank you to all of you for your nice comments and emails!  I'm thrilled to know so many of you have my back.  Rest assured that I'm not about to let this one person spoil my fun.  It's funny, but when I started this blog, I didn't want to post a public stat counter.  I was afraid I'd only have a couple of people and I'd be too embarrassed that just my friends and, possibly, my mother, were looking at it.  As it is, I now average 1,000 visitors a day!  Isn't that wild?  I can't believe it.  And for the record, my mother isn't one of them.  She still refers to this as my "blob".  Anyway, I appreciate each and every one of you!

On the knitting front, I thought I would post pictures of the handwarmers I made for my daughter-in-law.  This was one of those patterns that I always intended to knit "some day".  It's called "Yummy Mummy" and is free on Ravelry.  I tried to find a direct link but to no avail. 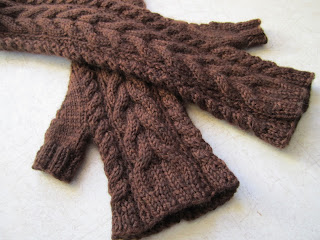 Emily's favorite color is brown and so I used Knitpicks Stroll in "Timber".  I have to say that I really like these.  They weren't very difficult, but I did have to pay attention!  Emily is tall so there's often a gap between the end of her coat and conventional gloves, so these are purposely long. 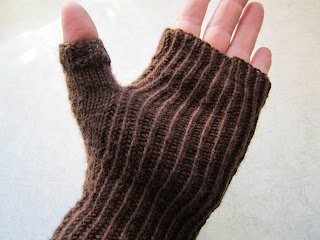 ﻿I wasn't sure if she would like fingerless mitts, but it turns out that she does.  Since I had some Mini Mochi in the same colorway as her London hat, I decided to make her another pair. 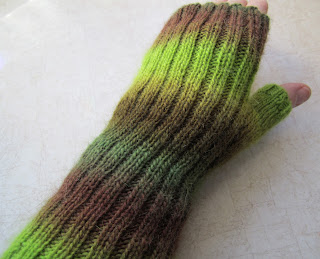 This is just simple straight forward 2 X 2 ribbing.  The pattern was also on Ravelry and was called "Simple Handwarmers" or something like that.  The designer was Debbie Haymark.  These were much quicker to knit!  Good thing since they're also long.

I had just enough yarn left over from the brown mitts to knit a pair of socks for my youngest grandson. 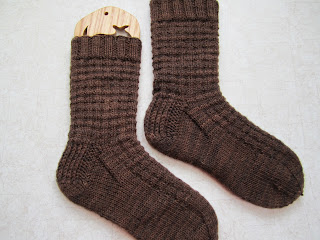 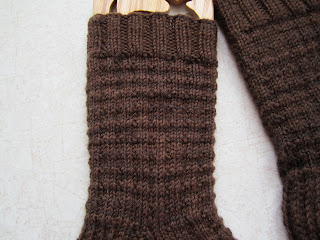 This is the "Purl Bump" pattern from Kathleen Taylor's book "Big Book of Socks".  I love this pattern and the book!  My grandson loved the socks too and that's the only thing that really matters!
Posted by Elaine at 3:02 PM

Is this the link you were looking for? Hope it helps - planning on making some for my sister who is due to be a yummy mummy!

Really REALLY love those brown (no surprise) cabled mitts. I found the pattern on raverly. Hmmmm.....

The little socks are so cute too. Yes, keeping the grand happy is the most important thing ever!

Ohh...I loves those fingerless mitts. I also love the socks that you made for your grandson. I have
The Big Book of Socks by Kathleen Taylor. I'm going yo have to check out that purl bump sock pattern.

Thanks for your wonderful blog.