For those of you who follow this blog, you might remember that I knit a couple of hats for my niece, Eliza. (You remember Eliza....she's the one who tried to make me invisible! Fortunately, she still hasn't perfected her magic spells!!) This is the second hat. She picked out both the yarn and the pattern. 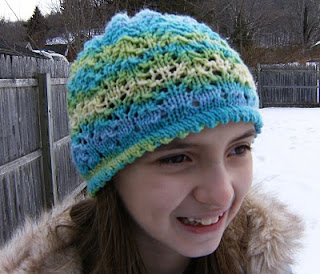 The pattern is called "Lacy Girly Fancy Hat" and can be found here. I modified it a bit by doing a provisional cast on and then knitting the picot hem together, so I wouldn't have to sew it later. 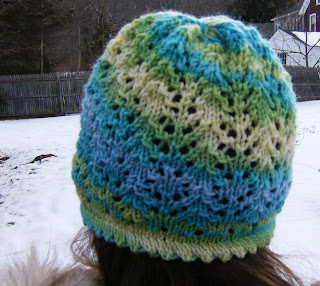 The hat calls for a ribbon or a trim to be inserted in the first eyelet row, but Eliza didn't like it, so we scratched it. I don't think you'd even notice that anything was missing. 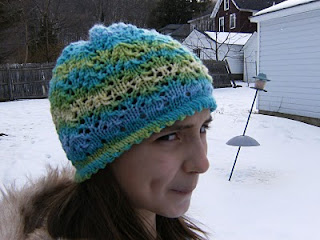 The yarn is Cascade 220 Superwash in Spring Meadow. I had quite a bit of yarn left over so I decided to make her some matching fingerless mitts. 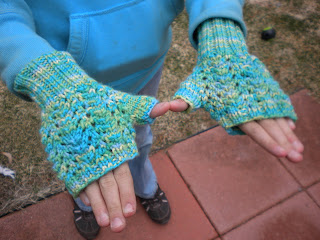 The pattern is the Gull Wing lace and is fairly easy to follow. Trust me, if I can do it, then you can do it!! Lace is not my strongest skill! The mitts have a seven stitch repeat, so I cast on 40 stitches and did a 2 x 2 ribbing for the cuff and then I added three stitches. I needed 42 stitches for the pattern and one extra stitch for the thumb gusset. I debated about continuing the pattern on the thumb, but I decided it was too much like work, so I just did stockinette. I worked three rows of the pattern (knitting the one stitch for the thumb) and then started the gusset. After the thumb gusset is finished and you transfer the stitches to a piece of waste yarn for finishing later, you should have 42 stitches. Normally, I would add a stitch or two above the thumb, but the lace is stretchy, so you don't have to. I just continued the pattern and finished it off with a 2x2 ribbing.
Eliza was thrilled with them, but her mother decided that she really liked the hat too and requested one for herself. Again, I used the Cascade Superwash, but this time I knit it in a solid. 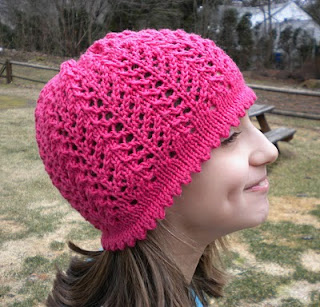 Eliza graciously offered to model. As you can see, it is a little big, but then it is for her mom. 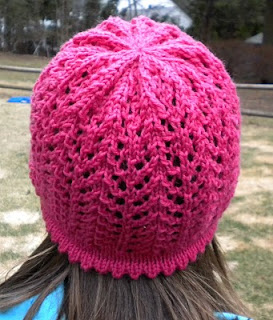 I thought mom would like a pair of mitts also, so I made her a pair as well. 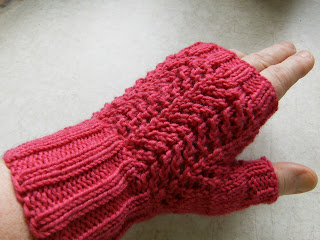 One tip. I wouldn't try knitting these and watching the Olympic short track speed skating events. It's not a good combination!
Posted by Elaine at 2:33 PM

Both of the hats and the mitts are so pretty, must go look up the pattern. They really suit the model, so cute

Love the hat--and your niece. Look at those dimples!!!

--AlisonH at spindyeknit.com (sorry, Blogger will take you to a dead link, they refuse to believe I'm not on Blogger anymore)