What I did on my vacation..

Okay, so it really wasn't a real vacation. My son had to have surgery and since he's a bachelor, he needed some assistance. A whole week in Rhode Island, sounds lovely, doesn't it? It might have been, except for this incessant rain here in New England. I wonder if we'll have any summer at all? In any event, it was perfect weather for just sitting and knitting. I decided to make some shorties for Marty. This little green pair was done with Lamb's Pride in Christmas Green. I love cables, but they tend to cling a little too much, so I decided to space them out with plain stockinette panels. 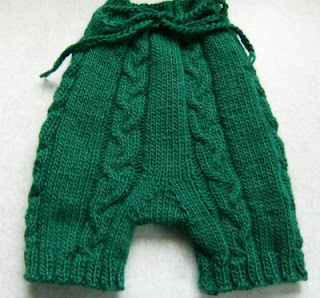 For those of you who are familiar with soakers, you know that it's always a good idea to add short rows to the bum to accomodate the diaper. Unfortunately, with cables that's difficult to do. I solved this though by picking up an extra purl stitch across the backside in between the cables. I started after about three cable crossings and then when I got to the split for the legs, I just decreased all those extra stitches. As a result, there is plenty of room. I didn't really use a specific pattern. Since I knit so many of these, I know how many stitches to cast on for his size and I just sort of winged it. You could easily adapt this to your own favorite pattern. Just make sure the cast on is divisible by eight. 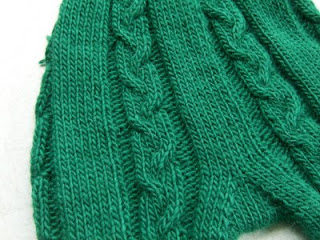 I also attempted another pair of Melanie's Sideways Britches. This is a test pattern that hasn't been published yet. It's a little more difficult than your average shorties pattern, but since the first pair I made fit so well, I decided to make another. Unfortunately, I wasn't paying as close attention as I should have been (blame it on the 47" high definition television!) and when I was almost done, I realized that I completely messed up the decreases across the bum! It was too complicated to try to figure out where I went wrong exactly, so I just started them from the beginning! 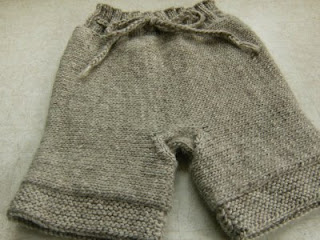 These are also done in Lamb's Pride in Sandy Heather. It's a nice color that should go with everything, including dirt from the sandbox! I might try another pair, but only because I took extensive notes, so I won't make the same mistake again! 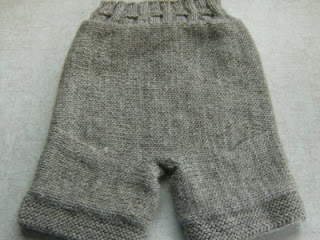 I also managed to make a pair of socks for Marty. This is one of my favorite patterns. It's called "Swirling Confetti" . I used Plymouth Yarns Happy Feet with a U.S. size 2 needle and it came out a perfect size. I knit it exactly as written, except I used a 3 st. garter stitch heel flap. This is my favorite new way to make a heel flap as I really like the way the socks look, plus it's easy to pick up the stitches. 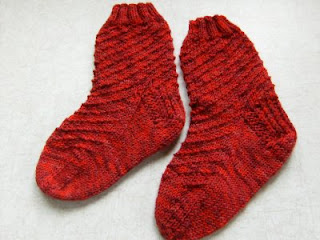 Finally, I finished another pair of socks that I was working on for Micah (with the huge feet). This time I used Cascade Fixation with a U.S. size 6 needle and the same pattern, except it has a plain heel flap. 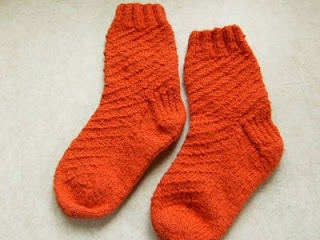 They really aren't this orange. The yarn is more like terra cotta, but my camera just didn't want to pick up the right color. I used the same number of stitches for both pair of socks and you can see what a difference the yarn and needles make. 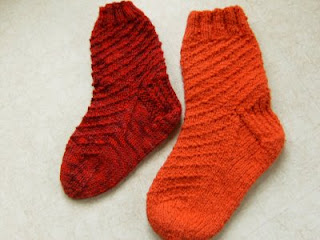 Next time I go to Rhode Island though, I hope to do a little more sightseeing and a little less knitting. It's a pretty little state and I spotted a lovely little yarn shop not too far away. I'm sure that qualifies as a tourist attraction!
Posted by Elaine at 2:51 PM

Boy! You've been busy! All such cute things...as always.

Hope your son is doing well. I have never been to the New England states. I imagine it is a beautiful part of the country.

You've been very busy. I am glad you are having a good time. Hope you are getting some rest,too, and that you are feeling much better now.