First off, it was pointed out to me that there is a typo in the new bib, "This Bear's Repeating". Rows 10 and 11 said to "Cast on 3 stitches..", but actually, it should have said "Cast on 2 stitches". The stitch count at the end of the row is correct and I'm sure most of you could figure it out, especially if you've knitted any of my other bibs, since they all follow the same basic format most of the time. (not always!) In any event, I've posted the corrected pdf version. It only affects the bib and not the washcloth.

Speaking of bibs, I've been asked to take part again in the Dishcloth Calendar for next year. At first, I didn't think I would do it again, but I changed my mind and have been working on some new designs. I can't post any pictures since they're all top secret, but I have to say that one of them is my most favorite design yet!! How's that for a tease?

I've had some really nice emails lately from knitters who took the time to let me know how much they like my designs and to thank me. My head is getting pretty swelled up and I can't tell you how much it means to me! Just for fun, I checked out my design page on Ravelry to see who (if anyone) was knitting the designs. I was floored by how many have been knitted and most of the comments have been very nice. I did, however, get an email from a knitter who wants me to make some designs for girls! The reason that I don't do any is because I only have grandsons! Every time I knit a bib, I know exactly who is going to wear it! I just can't see Marty wearing a pink bib. He's the reason I started designing in the first place. I didn't do it for the money (obviously). I just did it for fun and to try and use up some of my cotton stash. I never dreamed it would turn into this not-for-profit business!! Still, I will give it some consideration, but understand that I don't have any source for inspiration! What do girls like anyway?

On the knitting front, I've just been working on my calendar designs, but I did mange to knit another pair of the Nemo socks for grandson #2, so he and his brother don't have to share them. I didn't post a picture, because they look exactly alike. I did make a different pair for Jack. The yarn is Regia and I think it's called "Indian Ocean" from the Jupiter series. The yarn was supposed to make rings and look very "spacey". Unfortunately, since I made such a small pair, the color didn't work out that way. Still I think they look okay for a boy. 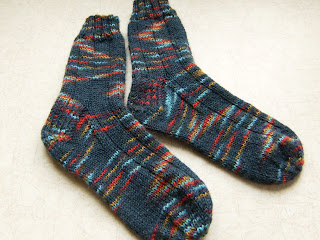 I really liked the look of the ribbing on the leg. My friend, Kathy, is always knitting her "plain vanilla" socks and I just love them. I decided to do a miniature version and I'm happy with the results. I even took a break from knitting for the grandkids and made a pair of socks for myself! I can't believe I did it, but they came out pretty nice. I'm thinking that I might even do it again! I just used a basic pattern and kept it simple since the yarn was so pretty. It's Regia again and this was Square Color in Candy. 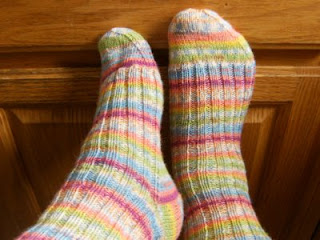 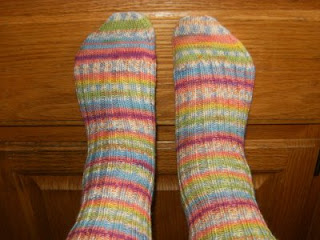 It's really hard to take a picture of your own feet!
Posted by Elaine at 10:01 AM

Good to see that you worked out the dishcloth calendar issues. I am sure it makes you happier this way!