My little niece turns eight this month, so being the only girl in the family, I decided to test out a design I had rolling around in my head. I wanted to make her some snowflake mittens that were a little different. I had hoped to use one of the snowflake designs that Alli had already designed, but they were all too big for my purpose. So instead, I just decided to chart my own design. I like to use wool for mittens and I like to knit them fairly tight. This is just a basic mitten pattern that calls for double pointed needles (although I always use one long circular and magic loop). It's the same pattern that my grandmother used for years to make all of us mittens when we were little. 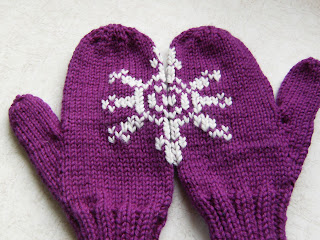 I've knit it so many times, that I almost don't even need to look at the pattern anymore. I just knitted the mittens and then did a duplicate stitch to add the snowflakes. 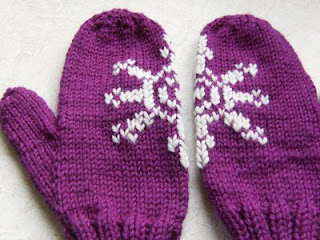 It was much easier to do the embroidery before doing the thumbs, as there was a hole to help maneuver the needle around. At first I considered trying to do them with intarsia, but the floats would just be too annoying. I also had added little white stitches around the perimeter of the flakes, but I decided they detracted from the design, so I eliminated them as well. 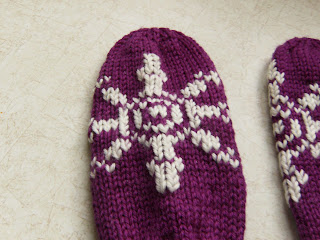 I also wanted to make the Owl Hat as Eliza loves animals. It's been made and posted on Ravelry a number of times, so it was helpful to read the reviews. The consensus was to move the owl motifs closer to the ribbing, which I did. I had my little grandson try it on for size, and I ended up making it longer. I may have to adjust the height anyway, but I'll have to wait until after the birthday to tell for sure! 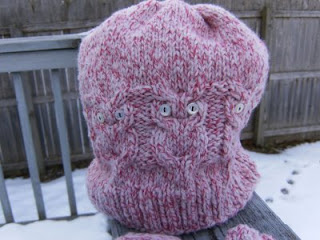 It's been so dark and miserable here in the Northeast that I've had difficulty finding any decent light to photograph projects. Whenever the sun has shined, I've been cooped up at work!

Of course, I had to make mittens to go with the hat. There's a pattern called "Give a Hoot" that I wanted to use, but I couldn't get the gauge right, consequently, I ended up doing the mittens myself. They visited the frog pond more often than Kermit! I ripped them so many times, I almost gave up on them entirely. I just didn't like the way they looked. I'm still not entirely happy with them, but I know that Eliza will love them and that's all that counts. Right? 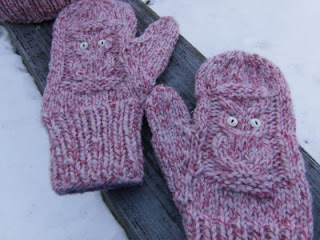 This is yarn that I had in my stash. It's by Sirdar and it's Denim Sport Aran. It was really nice to work with, but I wish that it had a little more wool content. I hope they'll be warm enough! 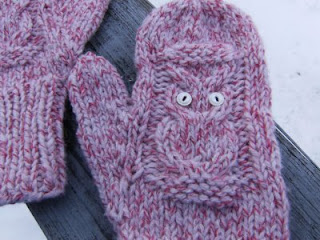 Of course the down side to this pattern is having to sew all those buttons! I had them left over from the days when I made and sold little English smocked dresses. They were the perfect size, but nine owls on the hat and a pair of mittens equals 22 buttons! Too much sewing when I'd rather be knitting! Happy Birthday Eliza and please try not to lose any of the mittens the first time you wear them!
Posted by Elaine at 9:27 AM

That owl hat and mittens looks great! I hadn't seen the give a hoot pattern. I might have given that a try. I improvised the mittens to go with my owl hat as well. I gave them to my sister for Christmas; she loves them!

Love the mittens!! They turned out soo cute!! I remember making an owl vest for my son when he was a little one. I thought they were cute then and sure enough they still are, very cool to see it on a hat and mittens. :)

Oh WOW! Love the new designs. You are just the most clever knitter ever! I have made some owl mittens before, but never even seen the hat. So cute....!