Happy Earth Day! I thought today would be a good day to publish my "green" peace bib. I was in college during the hippie 60's when the peace symbol first gained such prominence and although I never was (and never will be) an activist, I really like what the symbol represents...peace. Who doesn't like peace? The thought of little babies growing up in a peaceful world is especially pleasing. I hope it comes to pass, not only for my own precious grandchildren, but for babies everywhere. 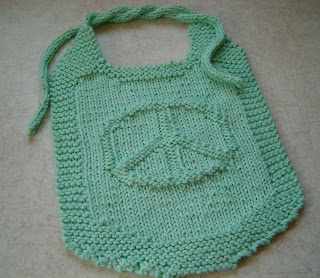 I used Peaches 'n Creme in baby green to make this. I love that yarn and I love that colorway too. It's so soft and perfect for a baby. I'm just trying not to imagine it covered with strained carrots or creamed corn!

Materials: Of course, you should really use green!! One skein of worsted weight cotton such as Sugar and Cream or Peaches & Crème if you are using the bib for meals. If, on the other hand, you want to use it as a “drool” bib, I would recommend using a superwash wool. The cotton has a tendancy to absorb the moisture, whereas the superwash wool will wick the moisture and keep baby nice and dry!

When you reach the I-cords on the bib, it is helpful, but not necessary, to drop down a needle size to make the cords slightly smaller.

Love the Earth Day bib. I'm getting ready to put it on my needles. I'm loving these bibs. I'm still waiting for you to post the fishy bib. Love that one also.
Keep up the good work.

FABULOUS job on the bibs and cloths Elaine! I love them!!